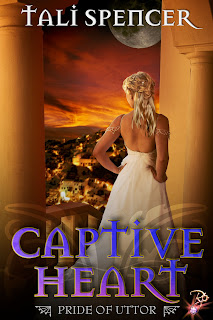 A vengeful emperor conquered her country... now he's after her heart.

Julissa pulled back, but Gaspar was stronger. The drapery dividing the tent bumped her arm as it fell into place again behind her. What was she doing here? This man was doing terrible things to her country, and she was trading her compliance piece by piece to secure slivers of his protection for people other than herself. All at once, her actions seemed dreadfully misguided. She was the one whose peril was most certain, not Aurelia in her poppy-strewn sleep or Petraeus whose fate surely rested with their god, at least until such time as Niarchus’ men could reach him.

Helpless, unable to flee a tent guarded by soldiers, far less a camp filled with them, she closed her eyes and prayed for Garmael to illuminate her path.

In this tent, in this hidden chamber and in the company of this man, all the Prophets were useless, armed only with empty words. When Gaspar’s mouth moved over hers, Julissa gasped at his heat, the way his lips explored hers by lightly tracing the upper, tugging at the ripe fullness of the lower. He felt…experienced. She’d kissed a few men before, but those kisses had been respectful pecks purchased by a gift or a pleasant dance. This kiss respected only her response to him. When she tried to pull away, Gaspar’s hand moved to hold her head so she could not escape his plunder. It wasn’t so bad, really. His lips were firm, but gentle, and tasted faintly of wine. Even the light stubble on his cheek that prickled her skin was more exciting than awful. Tentatively, she answered his kiss, not knowing how. He taught her with lips that gently sucked and teased until he had persuaded hers to open. The touch of his tongue against hers, probing and practiced, tasted like an imperial summons. To her surprise, she answered.

A soft moan escaped her throat.

“What way? Like this?” He nibbled the junction of her neck and shoulder in a manner that caused her nerves to leap.

Why did he have to smell so good? And the way his cheek rasped her skin awakened a tingling, needy ache in her nipples. Those points of flesh strained toward him with an urgency that alarmed her.

“Can’t I?” he disputed, though he smiled. “I promise to use you nicely.”

Gaspar’s lips brushed hers again and his hand seized upon the sheet that, somehow, had survived this far to conceal her body from him. No more. The sheet fell in white folds to the floor. Julissa reached to grab it.

She was lost, transfixed by the gentle yet commanding timbre of his voice as he stepped back to see what had been hidden. For a moment, his gaze traveled over her with clear admiration, then he breathed just one word.

Something in Gaspar’s tone, something worshipful, convinced her to stand for his perusal. He reached out his right hand, the fingertips just brushing the curve of her left breast, then the dip of her waist, his hand turning to skim the line of her hip. His touch caused her breasts to lift, her nipples to tighten to erect buds. Like some mysterious fruit, her sex blossomed, swollen with hot need, between her legs. To her surprise, she did not tremble. She felt like neither a prisoner nor a slave. She felt…chosen.

“I need no more proof than you that the gods exist,” he said.

With a swiftness and strength that surprised her, Gaspar scooped her off her feet into his arms. The world spun for a moment before she found herself on the bed with Gaspar beside her, clad still in his shirt, trousers and boots. His right thigh nudged between her knees before she could think to close her legs against him. While she squirmed in dismay, he cupped his right hand on the full pale orb of her breast and languidly teased the peak of her nipple, surprising her with the jolt of pleasure his touch awakened. His palm owned her flesh, defined it, before finding equal pleasure in its twin. Something hard and thick pushed urgently against her thigh and she realized with a start it must be his male member.

When she opened her lips to protest, his mouth was again upon hers, his kisses more demanding than before. Hotter, sweeter…so intoxicating her lips sought his. His hand left her breast to fumble with his trousers. What pushed hard against her thigh when he resumed his caresses was fleshy, rigid and hot with demands of its own.

His organ’s hardness terrified her, but thrilled her, too, the way it thrilled her to go off on her own into town, not knowing what she’d find. Like his body, so muscular and unexpected, this man was new to her, unexplored and utterly forbidden. He was also quite skillful at navigating her uncharted swells and hidden places, appraising and handling her like something rare and fine. She quivered at the gentleness with which his hand skimmed her body.

“You have the figure of a goddess, my lovely Magda.”

Her heart lurched at not hearing her own name. “There’s something you should know—”

Wrapping an arm around her waist, he pulled her hard against him, a gesture so possessive it left her stunned. There was no point in not touching him, given the embrace. Julissa placed her hands upon his arms and her fingers encountered the soft linen of his shirt and, beneath it, the hard thick muscles of a robust male. Though she tried to push him away, Gaspar’s right hand continued to explore her contours, her curves, her thighs, leaving delicious trails of sensation wherever he touched. What he awakened in her flesh was like music swelling her blood and it threatened to vibrate her every nerve.

“Sweet Magda,” he growled, and his mouth traced the column of her throat, found the valley of her breasts.

Her nipples felt swollen, almost painfully so, and his lips, when they found one, released the sweetest pulses she had ever known. How wonderful she thought, gasping at such bliss from something her mother had warned her never to allow. She arched her back as his hand abandoned her thighs to caress the full, firm pillows of her breasts. His tongue flicked like flame, each measured moist touch awakening new heat that rippled from her breasts into the core of her belly. When Gaspar’s hand again reached to her thighs to stroke the soft insides leading to her sex, she remembered his intent.

“Hush,” he said, and his kiss upon her lips was the command of an emperor.