I'm so excited to see MA Church is re-releasing Faded Love, about a top model who must come to terms with disfigurement if he is to fully accept a man's love. This is a powerful, moving story and highly recommended. You're in good hands. Just enjoy the excerpt and the journey. 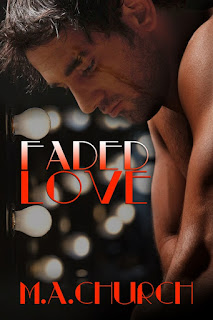 Blurb:
People often say that the true perfection of the human form is in its imperfections.

Obviously those people never lived a life of a model. Perfection is flawless. Desired. Demanded. Superstar model Ashley is living the dream. As one of the top models in the world, anything he desires is at his fingertips. Perfection on the surface hides human flaws, though. The one thing Ashley fears? Commitment. If it isn’t broke, why fix it? He and his lover, Will, have the perfect relationship. Or so Ashley thinks until Will starts pushing for more.

Then a moment in time shatters the illusion of his perfection, and Ashley finds the very basis of his existence torn. Bruised. Wrecked and destroyed. Scarred.

A near-fatal car accident leaves Ashley permanently disfigured, his career in a tailspin. Only his lover, Will, has a chance to pull him out of his depression. Can Ashley see there is more to him than just a perfect face? Scars can fade, but true love never will.

It was late evening when Ashley stumbled into his apartment and dropped his bags next to the door. The California shoot had gone well, but the flight back had been a nightmare. He had to jog the length of a concourse, while doing this incognito, and barely made it to the gate on his connecting flight. The damn attendants were closing the doors as he got there.
Then they ran into turbulent weather, which his stomach hadn’t appreciated. Plus his in-seat video monitor was malfunctioning and inoperable. Good thing he brought a book. But it did irk him that everyone else could watch movies and TV shows.
Ashley lurched to the bedroom and glared at the clock next to the bed. “Shit. I should call Will.” Ashley scrubbed at his face. He was stressed and tired. What he should do was go to bed, but he was too tired to sleep… if that made any sense.
He jumped when his cell rang and, recognizing the ringtone, fished it out of his pocket. Should he answer it? He missed Will, but lately things had been tense. He cared for the other man, probably more than anyone else in his life. The sex was good, and they enjoyed each other’s company.
Things between them were easy and loose. Open. Ashley liked the hands-off approach they were taking toward their relationship, which was why he couldn’t understand why suddenly Will was pushing for more. It stopped ringing, and he sighed.
Standing around staring at his phone certainly wasn’t going to relieve his tension. He could either get drunk then have to sweat the calories off tomorrow, or he could call Will and work off the tension that way.
It was a no-brainer. He unlocked his cell and called Will back.

Author Bio:
M.A. Church is a true Southern belle who spent many years in the elementary education sector. Now she spends her days lost in fantasy worlds, arguing with hardheaded aliens on far-off planets, herding her numerous shifters, or trying to tempt her country boys away from their fishing poles. It’s a full time job, but hey, someone’s gotta do it!

When not writing, she’s on the back porch tending to the demanding wildlife around the pond in the backyard. The ducks are very outspoken. She’s married to her high school sweetheart, and they have two grown children.