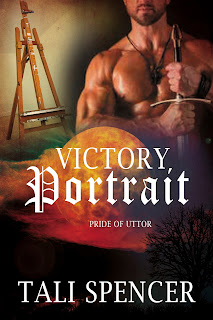 Victory Portrait, the fourth book in the Uttor series, releases today on the Resplendence Publishing site.


Imperial captive and former Sebboyan prince Peta Kordeun has one great wish: to meet Darius Arrento, conqueror of his country and a man he has idolized since childhood. That wish comes true the day the Uttoran emperor assigns Peta to assist the artist who will be painting the great general’s official portrait.

This is a MM romance and readers of the series can also expect to see more of Gaspar, who gets more than he bargains for when he decides to play matchmaker. You will also see more of a previously very minor character, the artist Brazzi. Brazzi's artistic method of using semen and precome to fix the brilliant colors of his paints gets thoroughly developed. Like really. Thoroughly. Also, you might never look at a paintbrush quite the same way again.

While available right now on the Resplendence site, Victory Portrait will soon be available on Amazon, AllRomance, and Barnes and Noble.

There's going to be a blog tour for Victory Portrait starting on April 18th, hosted by Pride Promotions. I've written numerous blog posts about my research, these characters, the Uttor series and how it was originally going to (and might yet) take a paranormal turn, and, well, me. If any of those subjects strike your fancy, it could be fun—and informative—to follow along.