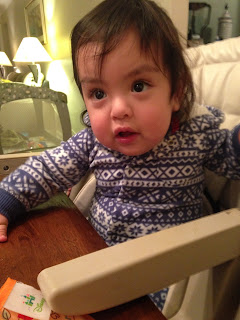 A year ago I asked my blog readers and Facebook friends for prayers for a little premature grandson. He was born at 27 weeks gestation after a difficult pregnancy (his mother’s water broke at 16 weeks and she was on bed rest until he arrived).

When born he weighed only a pound. His lungs were underdeveloped and he needed help breathing. Over the next several weeks his parents were called to the hospital four times because both his lungs collapsed and he was not expected to make it. But the little guy was a fighter! And I think those prayers helped.

I mean really. Because soon after I asked for them, and so many of you sent words of help and support, he began to improve.

He got stronger. Doctors removed the chest tubes and he started to breathe on his own. He also began to eat on his own.

He is now over a year old actual, and not quite a year from when his due date should have been.

And he is bright, happy, and doing great!