M.A. Church writes the sexiest aliens around. I just love this cover and excerpt! The book is every bit as fun as it looks! :) Give it a look and read what Ms. Church has to say about whether or not humans are alone in the universe. (Personally, I hope we are!) 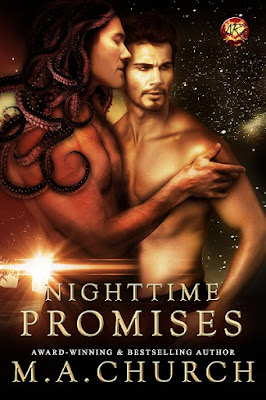 Buy Link: https://www.allromanceebooks.com/product-nighttimepromises-1908642-340.html
NOTE: This is a previously published work. The title, author, and/or publisher may have changed.

When you wish upon a star… it comes true in ways you never expected.

Things have gone downhill since Sheriff Bryan Coltrane got involved in the FBI’s investigation of a recent UFO crash. Not only is a homophobic agent pushing his buttons, but he’s made contact with one of the aliens…who wants him for a mate!

Daroshi, a warrior with tentacles from the planet Maz’Rar, monitored the rescue of his captain, Ziang. Impressed by the courageous and brawny human male, he wants Bryan for his own despite knowing little about the race. Neither man is prepared for the problems arising from Daroshi’s desires, or the passion exploding between them.

What’s an alien to do when his mate harps on his civil rights and makes demands? He makes the wishes come true.

Excerpt:
“Morning, Agent. Why don’t you have a seat and tell me what can I do for you?”

“I need a list of everyone that owns an ATV.”

Bryan snorted. “Are you kidding me?”

No kidding. “You’d do better to ask me to find the proverbial needle in the haystack. This is the South. Have you looked around? Nearly every man, woman, and child in these parts own ATVs, myself included.”

“But do you own a yellow one? A very old, beat-up, monster-sized one? Can you tell me who has a four-wheeler like that?”

Bryan’s guts clenched as a burning sensation started. “No, mine isn’t yellow. You want to tell me why you need this information?”

S.A. Jacob stood up and shut the door to Bryan’s office. “We had an incident last night at the site.”

Are we alone in the universe?
One of the most widely asked questions you’ll hear today is “are we alone in the universe?” News flash, folks—you’re in the minority if you believe no intelligent life exists in the universe.
In the US alone, at least half of all Americans believe we’re not alone. Many staunchly believe there’s some form of life on other planets. Even more say intelligent extraterrestrials have already come to Earth and have been doing so for some time.
Why do these people feel this way? Well, there are multiple reasons why the extraterrestrial question continues to gain popularity. Here are just a few:

1. The Size of the Universe
Counting the stars in the universe is like trying to count the number of sand grains on a beach… it’s just not possible. Although estimates vary among different experts, the general consensus is that there are at least between 100 billion and 200 billion galaxies in our universe. Now, think about that for a moment. That’s a lot of uncharted territory.

3. The Evidence of UFOs
Within the past few years, dozens of governments admitted to allocating resources and having programs to study the UFO phenomenon.

4. Mass Mainstream Media Attention
Media outlets of all kind are covering the topic, almost every movie that comes out these days has something to do with space or some kind of extraterrestrial intelligence. We’ve been bombarded with the topic for a while now, so it’s not hard to see how it’s on the minds of many.

These are just a few things to think about. So, what do you think? Are we alone in the universe? Bryan and Shawn would tell you—quite loudly, actually—that no, we are not, lol. So what in the world possessed me to write a story about tentacles? *laugh* Originally the idea came from an anthology submission. While I’d written sci-fi before, tentacles was a new one for me.
Most of those stories I’d read were dark and edging on toward scary. So I decided to do something different. My alien does indeed have tentacles, but they look more like dreads and are on his head. On the males of the species, they’re part of his reproduction system. So, yes, the tentacles like to come out and play. *wink *

I didn’t make the 25K word count cut off. Not only did I not make it, the story ended up close to 90K! It ended up with not one, but two, humans and several tentacled alien warriors. What can I say? They all had a story to tell.

It didn’t take long to see that while the alien’s tentacles were very much a part of the story, the books themselves didn’t revolve around just that. I actually ended up devoting a lot of time to world building. The series starts on earth and then ends up in outer space—on the alien’s planet!

When not writing, she’s exploring the latest M/M novel to hit the market, watching her beloved Steelers, or sitting glued to HGTV. That’s if she’s not on the back porch tending to the demanding wildlife around the pond in the backyard. The ducks are very outspoken. She’s married to her high school sweetheart, and they have two children. She was a finalist in the Rainbow awards for 2013.

For more information on other books by M.A., visit her official website: www.machurch00.blogspot.com

There is a tour giveaway too:
http://www.rafflecopter.com/rafl/display/ba112ffc1213