Adored to be Released Next Week 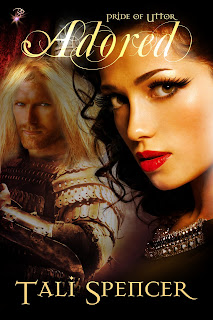 Adored, the third book in the Pride of Uttor series, will be released next week by Resplendence! This is the book with my pregnant heroine. After all, pregnancy doesn’t put a stop to desire…or love. It just gets in the way.

First off, isn’t this a gorgeous cover? I love the rich colors. The world of Uttor is vibrant and passionate. So is Adora, a woman who, pregnant or not, is determined to set her own course in life. I think the cover conveys that—at least I hope so!

Can he reconcile his vision for his country with his passion for a woman whose spirit sets his blood on fire—but for whom kingdoms have gone to war?
* * * *


The next book in the series, Victory Portrait, will tell the story of enslaved royal Peta Kordeun and the triumphant Uttoran general Darius Arrento, who falls for the beautiful captive when ordered by his emperor to sit for an infamous artist….