On Thursdays I post excerpts from a novel I’m working on. This week I continue with Thick as Ice, wherein Ibeena reveals just why she wants her mother, Vorgell gazes in an enchanted web, and Madd thinks something more than magic’s afoot. 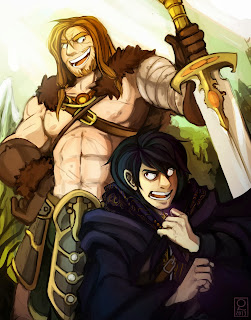 Thick as Ice, Chapter 5b

“You have a mother? A living one?” Though Vorgell had never truly pondered the facts of Ibeena’s existence, the old witch’s age alone would have made having a mother unlikely.

Madd’s elbow jabbed his ribs. “Now’s a good time to stop talking. And all witches have mothers, and I wouldn’t bet on her grandmother being dead, either. Witch women create life—remember?—so that means they live lots longer than witch men… or anyone else.”

“I see,” grumbled Vorgell. He’d been counting on Ibeena being old enough to topple over on her own one day.

Ibeena peered at them both above a smug smile. “I will live longer than both of you put together, especially given your dangerous ways. Thieving and fighting—witches gave up such ways long ago.”

Not all witches had. After all, Tagard was the Thief King of Gurgh. Now was not the time to argue the point. Vorgell pressed his lips and let Madd take the lead. He really needed to remember at all times that Madd was much better than he at negotiating with witches.

“You could give us some coin, for provisions.” Yes, Madd was bargaining already.

Ibeena waved her hand. “Ha! You owe me a favor! The favor is that you go to the Stilted Bogs and fetch my mother, bring her to Gurgh. Deal with your own provisions. Vorgell is a hunter, yes? Let him hunt, or subsist as best you can on frogs and fish.”

“And we can find her in the Stilted Bogs? Any particular village?”

“There are no villages in the Bogs. She lives alone, and likes it that way. I am sending the two of you instead of a message because she will need an escort. Moon oaks do not grow near in the Bogs, and the Shroud is dangerous.”

Madd settled onto a stool perched next to the table. He folded his arms. “There’s more to this. Why fetch an old woman, over such a long distance?”

It was a good question, so Vorgell nodded that he too wanted to hear an answer.

Muttering a complaint—or possibly a curse, that being a possibility—Ibeena pounded her staff and walked to the darkest corner of the room, which had merely looked murky. Now that Vorgell looked more closely at it, he saw it was hung with curtains… no, with spreading, intricate webs, as if generations of spiders had worked upon a masterpiece. Ibeena waved her hand before the web and the threads began to shimmer. Within moments the webs generated a sinister shape, not life-size but clearly immense.

Vorgell stared into the glowing eyes of a giant white wolf. His hand found his sword and his fingers curled around the hilt. Petal crouched on his shoulder, scaly head level with his cheek, hissing at the image.

“Do you recognize this creature, barbarian?”

“A Fell Wolf, in winter coat.” When he had left Scur, he had possessed a coat made of a single wolf’s skin. He had slain it himself to attain his hunter status.

“Packs of these creatures have recently come down from the mountains and are plaguing the hills. They have little interest in the Bogs, but now dwell in the Shroud.”

“They would be red, then, if they have strayed in summer.”

Ibeena bared her flat yellowed teeth. “They are as you see. This image was provided by one of our Circles. Along with this one—”

“Again, from our Circle on the edge of the Shroud. They are seeing snow one day… and the next day the sun is hot and it is as if there never was snow. This is not the way the weather should be.” Ibeena straightened and lowered her hands. The image in the web vanished. “There is magic afoot, and I know not what kind. It may be wizards… it may be something else. Whatever it is, I fear any harm it causes will be blamed on witchkin. Fear of magic already has many ready to kill us. Barons and wizards have placed bounties on our kind. But I cannot do it alone. I need the assistance of a witch stronger than I am.” She eyed them grimly. “I need the two of you to fetch that witch.”

“Let me get this: you want us to go through the Shroud, which is infested with these wolves, and snow in the summer, and there’s magic afoot, against which you have nothing to offer? Could you have found a more difficult favor?”

“Perhaps if I tried,” said Ibeena. “Too bad for you this is the one I want you to perform.”

They exited by another path through the laundry yards and dripping alleyways of the Rag Market. It was witchkin hiding that made it necessary to be so secretive. Wizards, in particular, made sport of hunting witches, females preferably, and there was enough hostility latent in Gurgh to foster the occasional witch-hunt. Secrecy saved lives, including possibly their own if anyone with a grudge had been following them and decided to lie in wait.

Vorgell found such sneaking around rather pointless. He was easy to pick out in a crowd. At his side, Madd was looking glum, and ready to express his discontent.

“I can’t believe she’s sending us on such a ridiculous errand.”

“I can’t believe she has a mother.”  Vorgell adjusted his cloak and hood, the latter necessary only so Petal could curl within it and so ride easily along. The basilisk had left his shoulder as soon as they’d left Ibeena’s workroom and, apparently concluding she was no longer needed, had gone into the hood to take a nap.

“What are these Fell Wolves? Are they big?”

“Enormous. They hunt in packs. Very dangerous. It is rare for a single man to kill one.”

“Am I supposed to be glad there’re two of us? Because, look at me, I’m not very good against wolves.” Madd’s small size was only part of the reason. Just a year ago he had possessed little skill with weapons, though Vorgell had taught him much since.

“It might be best if we try to avoid the wolves. And don’t forget, we have Petal.” He jerked his thumb toward the laden hood on his back.

“That actually does make me feel a little better.” They’d reached the Tinker’s Square. Sunlight flashed off every manner of pipe, tube, plate, and wire. The denizens of the neighborhood were hardworking, practical, and not given to excessive hawking of their wares. Most of the patrons were male and dusty.

“Do we leave tonight? Or tomorrow?” Vorgell wondered. It was only mid-afternoon.

“Tomorrow.” Madd held up his pouch, heavy with cherries. The sweet scent of them wafted on a breeze to tempt Vorgell’s nose. “I don’t care if Fell Wolves start howling at the walls of Gurgh, I’m eating these cherries—and I think it’s going to take me all night.”

Vorgell’s cock was already at attention, pushing against the restraint of his codpiece. If he thought Madd would not eat all the cherries himself in a fit of pique, he would have picked up his smaller friend and dashed through the streets of Gurgh toward Thieves’ Wart. Instead he just quickened his pace.

As far as he was concerned, they could not reach home fast enough.

I enjoy feedback and am always happy to discuss readers’ thoughts or answer any questions.
Posted by Tali Spencer at 5:36 AM