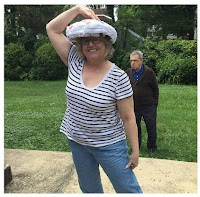 Because I had a birthday and was daft enough to wear a piñata hat, I decided I would share two samples from my Triempery universe. This is the same universe as my Cumbuck’s Tale story, but without the smut. This is not an MM romance universe... it’s pure high fantasy with gender pairings across the spectrum.

Sordaneon is the origin story of Dorilian Sordaneon, the love him or hate him half of the hero-pair of the later Rill Lord saga. This novel is currently under consideration by an agent. I’ve posted the first two chapters and included a warning because my editor pronounced them gory. Which they are. Dorilian may have been born in the lap of godhood, but people of his world prefer their gods obedient or dead.

“What Beats Pipe and Fiddle” is a short story peripheral to the saga. In it, a major character in Sordaneon is seen as a young man who must use his wits to get out of a tight spot. It’s a much lighter read.