Guest Author: Chris T. Kat and Despite the Odds

Here’s a lovely new book by one of my fave authors, Chris T. Kat. It’s getting rave reviews, including this one from USA Today! 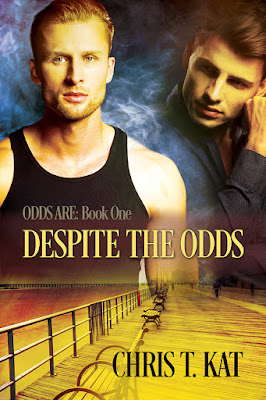 Blurb:
Never judge a book by its cover.

Michael Campbell can’t hold a job for more than a few days. He’s lucky his foreman is giving him another chance with the solar panel project at a primary school in Atlantic City. When he spies a man walking strangely in front of the school, Michael laughs, assuming he’s drunk or high. Little does he realize that Joshua Stone, a teaching assistant, has cerebral palsy, and he’s having a bad muscle control day. Taking a tumble right in front of the handsome construction worker is just his luck.

When Michael learns the truth, he feels badly for his cruel behavior. He offers to give Joshua—and his tricycle, the Racing Rhonda—a lift. Joshua accepts the help, and suddenly there’s a gorgeous man breezing into his life, turning his world upside down. But Michael has more issues than his inability to hold down a job, and neither man is sure if they’ll be able to overcome their fears in order to be together.

Excerpt
Henderson bulldozed right into Michael’s personal space, surprising him with the action. “You stupid son of a bitch!”
“Hey! No calling my mother names, okay?” Michael tried to joke. He’d never seen Henderson this angry. Neither did he care to have all this anger directed at him. Sure, he could hold his own if necessary, but he was more a run-away-if-there’s-trouble kind of guy.
“Do you know who that was?”
“A drunk who shouldn’t set foot on school property?” Michael hazarded.
Henderson’s eyes narrowed to small slits when he replied, “His name is Joshua Stone, and he isn’t drunk. He’s a teaching assistant who works here.”
“He looked drunk to me.”
Henderson closed his eyes, obviously trying to rein in his temper, before he put a bit more distance between them. “Mr. Stone is disabled, hence the way he walks. It’s not always that obvious, but he was carrying books, a lot of books, which threw off his balance. He’s a very good teaching assistant. He doesn’t deserve to be laughed at by someone like you, who can’t even take care of himself.”
That stung.