Andrew Gordon's THE LAST GRAND MASTER is a high fantasy book I've recommended on this blog before. It's been re-released as part of Dreamspinner's new imprint--and there's a great giveaway! Check it out... and the excerpt, too! 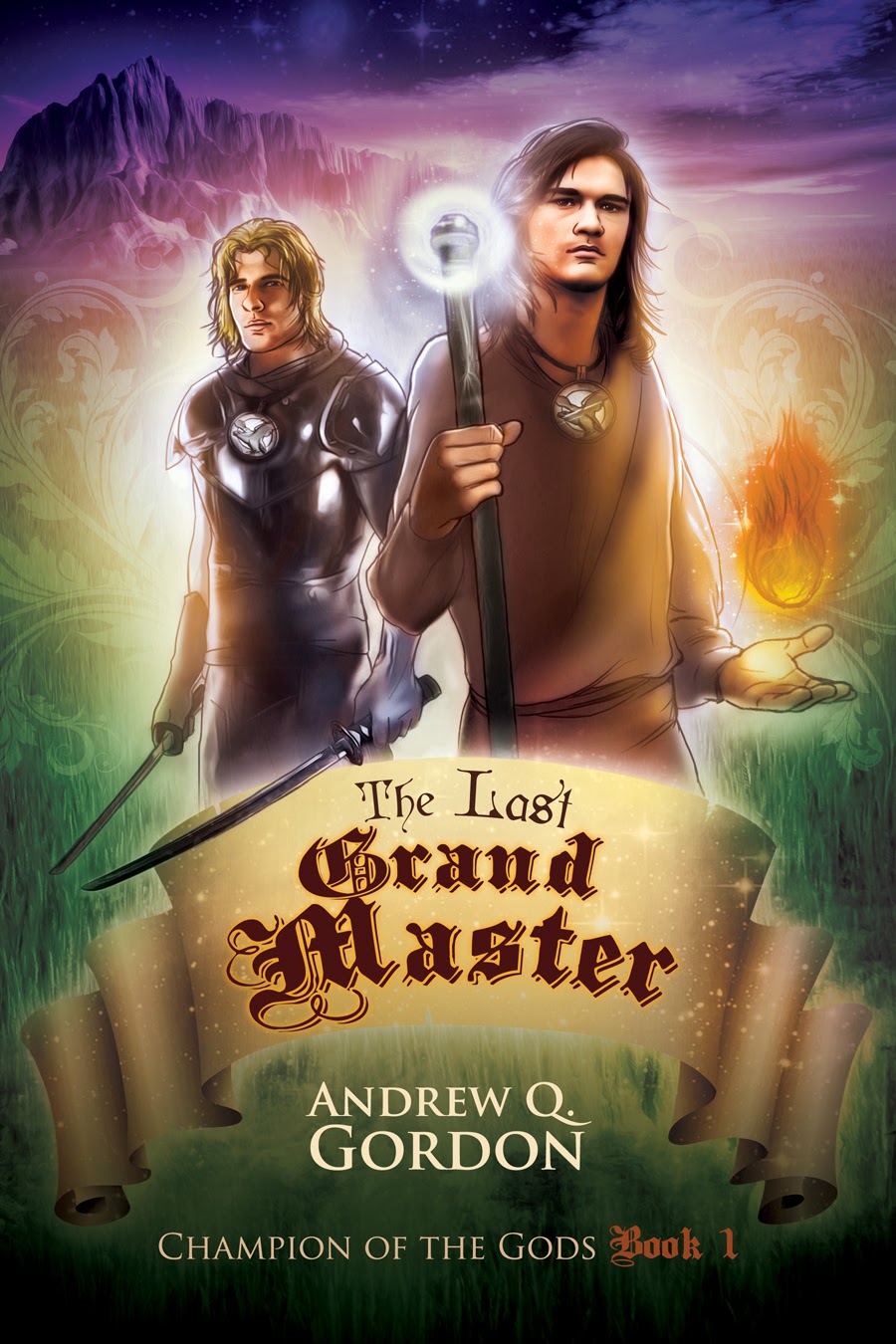 SERIES: Champion of the Gods

BLURB: In a war that shook the earth, the six gods of Nendor defeated their brother Neldin, god of evil. For three thousand years, Nendor and the Seven Kingdoms have known peace and prosperity and Neldin's evil was nearly forgotten.

But then Meglar, wizard king of Zargon, unleashes the dark magic of the underworld and creates an army of creatures to carry out his master's will. One by one, the sovereign realms fall as a new war between the gods threatens to engulf Nendor.

Leading the opposition to Meglar is Grand Master Farrell. Young and untried, Farrell carries a secret that could hold the key to defeating Meglar—or it could destroy the world.

Farrell is joined by Nerti, queen of the unicorns and Miceral, an immortal muchari warrior the Six have chosen as Farrell's mate. As Farrell and his new allies make plans to counter Neldin's evil, Meglar forces their hand when he invades a neighboring kingdom. Rushing to help their ally, Farrell and Miceral find themselves in the middle of the battle. Cut off from help, Farrell attempts an untried spell that will either turn the tide or cost he and Miceral their lives.

He currently lives in the Washington, D.C. area with his partner of nineteen years, their daughter and dog.  In addition to dodging some very self-important D.C. 'insiders', Andrew uses his commute to catch up on his reading. When not working or writing, he enjoys soccer, high fantasy, baseball and seeing how much coffee he can drink in a day.

There is a Kindle Giveaway as a part of this tour that is sponsored by the amazing DSPP to promote The Last Grand Master.

Excerpt from The Last Grand Master:


Farrell slept until he heard someone shuffling about the room. Rolling over, he tried to ignore Lisle, but Miceral sat straight up.
“My, aren’t you a jumpy thing. Not at all like your friend there.” Lisle’s voice took on an acerbic tone. “I had your things moved to these rooms. A rather persistent unicorn kept insisting the temple send clerics to my room with instructions to move your bags here.” She continued to move about the room, gathering dirty clothes, unfazed by Miceral’s presence.
“Thank you,” Miceral said. “I wouldn’t have known where to find my room. We came here first, and Farrell fell asleep before he found someone to show me to my quarters.”
Farrell pushed his head farther into his pillow.
“Hmm, is that right?”
He heard Lisle leave and groaned into his pillow, knowing where she was headed next.
“When his royal messiness wakes up,” she called from the adjoining room, “remind him to drain the tub.”
“Um, sure,” Miceral answered as Farrell poked his head up.
Rolling his eyes, he mouthed the word Lisle before planting a soft kiss on Miceral’s neck. “Good morning, Lisle.” He leaned over and brushed his lips across Miceral’s cheek.
Lisle stomped back into the room. “Well, well, my messy little wizard prince has decided to grace us with his magnificent presence.” Farrell rolled onto his stomach, pulling the ends of the pillow up around his head.
Miceral snickered before rubbing his back.
“Now, none of that, lad. It’s long past time for you to be up. I can’t clean until you get your lazy, naked bottom out of bed. No offense to you, Master…?”
“Miceral.”
Farrell steeled himself for her response.
“Nice to meet you, Miceral, even if Farrell is too ill-mannered to have introduced us properly.” She paused long enough for Farrell to shake his head into the pillow. “If it isn’t too inconvenient, would you please empty that oversized tub of yours?”
Turning again, he noticed Miceral, red-faced, clearly uncomfortable with Lisle standing in the doorway.
“Yes, Lisle, my apologies for being rude and not introducing you to Miceral and for forgetting yet again to drain the tub. I’m an awful person. I don’t deserve you in the least.”
“You’re right, you don’t deserve me, but I’ll keep trying to make you presentable all the same. There’s food on the table. Hurry up and eat; then get out. Show your friend around or something. Here’s an idea. Show him his room so he isn’t stuck here with you forever.” With an exaggerated turn, she left.
He mumbled a spell, rolling his eyes. “The tub is drained, Lisle. Is there anything else I can do?”
“Yes,” she called from somewhere else in the apartment. “Get up and get out!”
He snapped his hand at the door and it swung shut. “Remind me to make sure to change the spell on that door. When we’re in here, I don't want anyone, not even Lisle, to have access.” He sighed heavily, then pushed the covers off.
“Lenore’s bright eyes, that is a sassy woman.” Despite his obvious embarrassment earlier, Miceral smiled broadly now. “Where did you find her?”
“She’s been at Haven since before I was born. When my former master died, she adopted me as her mission in life. Given how inept I am at housekeeping, I quickly became her full-time assignment. I pay her enough to cover her loss of other paying clients, and she seems content to make sure I stay in line.” Farrell climbed out of bed. He walked over to his closet, pulled out a pair of baggy linen pants, and stepped into them.