ETA: Chris has let me know this book's release date has been moved back to February 15th. With a cover like that, it will stay in my mind! 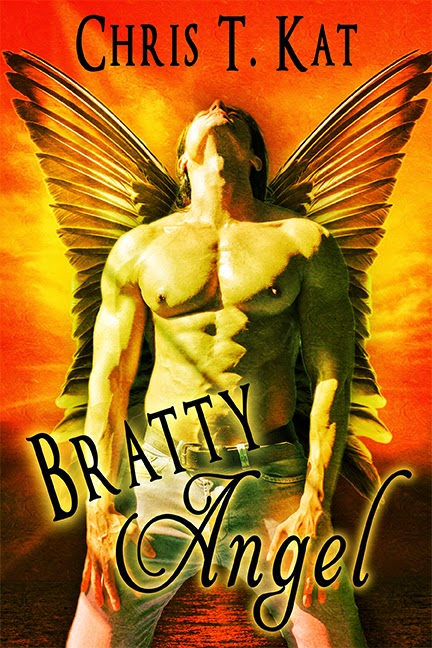 First Patrick is accosted by a hellhound with a yen for fries and ketchup. Then he encounters a beautiful, but bratty angel who doesn’t seem to understand the concept of ‘no’… or personal space. Not to mention he demands Patrick pleasure him, which Patrick refuses to do. So why does Patrick feel a connection to this unruly seraphim? And why can’t he forget him?

Two weeks later, the brat is back, making more demands. But Patrick makes it clear he doesn’t do demands. That should be the end of it, right? Or not… Maybe there’s more to this bratty angel than meets the eye. If Patrick has the patience to get past his bratty ways.

Excerpt:
Patrick rounded the corner fast, almost too fast. He barely kept his balance, groaning when his left knee twisted, reminding him that his ability to outrun anyone or anything had taken a turn for the worse. If that damn thing he'd only snatched a brief glimpse of got him, he'd be mauled and killed.

The huge, nightmarish thing panted as it chased after him, gusts of his surprisingly clean-smelling breath wafting to him. As Patrick raced through the deserted streets—because who the hell took a shortcut at this time of the night—he searched for a hiding spot. A fire ladder would work too, or whatever. Anything really, so he could put a safe distance between himself and the grotesque creature. He could have avoided all of this but, damn him, he'd indulged in his human body's desire for junk food. Next time he was going to order his food in—if he lived long enough.

Patrick's lungs burned, and his leg muscles screamed bloody murder at him. Fuck the universe for rendering him incapable of flying. He’d been trapped in this human body for twenty-three years already, and no one would ever think he'd once been strong and—best not to go there. Nothing good ever came of his memories.

Patrick stumbled, and a hot gust of air tickled his neck. He plunged face forward to the ground, all air rushing out in one short pained gasp. Reflexively he put his hands behind his head to protect his vulnerable neck.

The freaking thing growled and yanked at the bag containing Patrick's junk food. Patrick yelped when the bag tore open, spilling its contents all over.

Curled up on the ground, Patrick peeked over his shoulder when a chuckle drew his attention. Someone hunkered down next to him before gentle fingers pried the last string of the bag from his hand. Patrick gritted his teeth, wishing he was in possession of his power instead of lying there, almost whimpering in fear.

“Don't worry, he's not malicious. He just wants your fries,” a soft, melodious voice informed him. The fries-loving beast growled, sending goose bumps up Patrick's spine. The voice added, “Right. He wants your fries and your ketchup. You see, the ketchup is majorly important.”

The person who'd spoken to him withdrew, and the creature's paws clicked on the ground as it followed the voice. Whoever it was rustled the wraps of his food and talked soothingly to the yipping beast. Carefully and slowly, Patrick turned on his side to take a look. His heart thumped painfully hard against his ribcage, almost causing it to burst.

Patrick's gaze traveled to the hands that dumped his fries on the torn bag, generously spreading ketchup all over them. The beast licked the hand in a grateful gesture before it dug into the food.

Patrick's breath caught when he observed the naked man who knelt next to the creature. The man's face was beautiful, no doubt about that. Patrick's gaze slid along a slender throat, finely toned shoulders, and a slight frame. A white, feathery wing covered the man's crotch.
An angel.