Today I welcome Michael Rupured to the blog. He writes the most wonderful stories about gay men in the recent past, in the case of his newest book, Happy Independence Day, about the gritty coming of age of the gay lifestyle in the tumultuous 1960s and, in particular, the events surrounding the Stonewall riots in 1969. I’ve read this book and it made me laugh, smile and cry.

There is also a giveaway! One commenter on this blog will be a winner. Read the details below.

Thanks, Tali, for allowing me to show off the cover for my upcoming release from Dreamspinner Press on your blog. By far, the most exciting part of the publishing process—at least for me—is seeing the cover for the first time. For my next novel, to be released August 20th, artist Christy Caughie created a gorgeous cover. To celebrate, I’m conducting a giveaway. Keep reading for details. 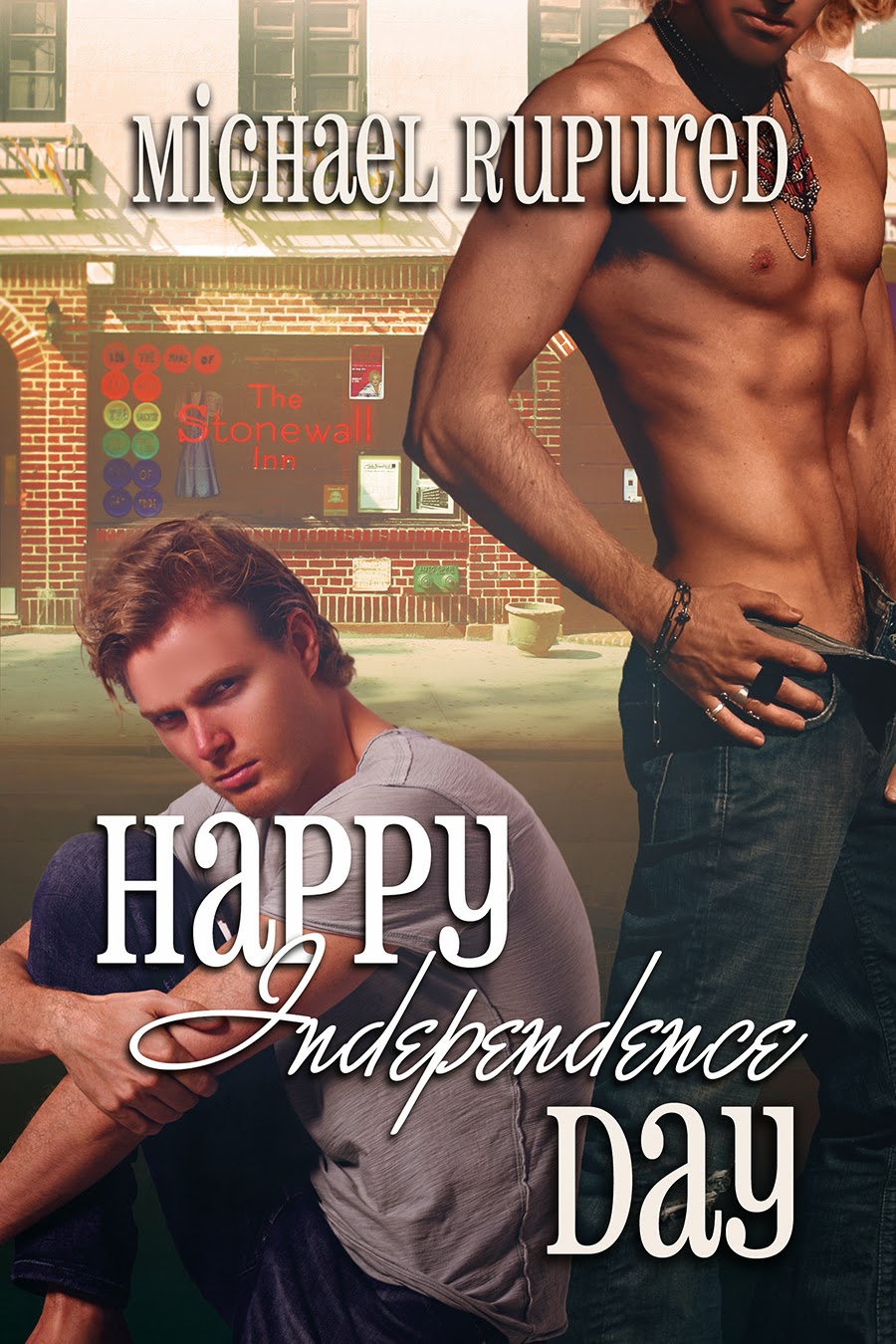 Blurb:
Terrence Bottom wants to change the world. A prelaw student at Columbia University majoring in political science, his interests range from opposing the draft and the war in Vietnam, to civil rights for gays, to anything to do with Cameron McKenzie. Terrence notices the rugged blond hanging around the Stonewall Inn, but the handsome man—and rumored Mafia hustler—rebuffs his smiles and winks.
Cameron McKenzie dropped out of college and left tiny Paris, Kentucky after the death of the grandmother who raised him, dreaming of an acting career on Broadway. Although he claims to be straight, he becomes a prostitute to make ends meet. Now the Mafia is using him to entrap men for extortion schemes, he is in way over his head, and he can’t see a way out—at least not a way that doesn’t involve a swim to the bottom of the Hudson in a pair of cement flippers.
Cameron is left with a choice: endanger both their lives by telling Terrence everything or walk away from the only man he ever loved. The Mafia hustler and the student activist want to find a way to stay together, but first they need to find a way to stay alive.
Preorder here:
Paperback: http://www.dreamspinnerpress.com/store/product_info.php?products_id=5311
Ebook: http://www.dreamspinnerpress.com/store/product_info.php?products_id=5310

The Stonewall Inn on Christopher Street in Greenwich Village is the setting for much of the action in Happy Independence Day. What is the Stonewall Inn?
The place, to put it bluntly, was a dive, and yet, in 1969 it was reputed to be the most popular gay bar in America. The building itself has a long history. In 1930, two former stables on Christopher Street in Greenwich Village were combined into one space, refurbished, and opened as a tearoom—Bonnie’s Stone Wall. The name changed to Bonnie’s Stonewall Inn in the 1940s, and to the Stonewall Inn Restaurant before fire gutted the building in the early 1960s. The structure sat empty until 1967 when it reopened as the Stonewall Inn. To conceal fire damage, everything inside–walls, floors, ceilings, and the plywood covering the big front windows—was painted black. The shabby interior lacked running water, so dirty glasses were washed behind the bar in buckets of water, later determined to be the source of a virulent hepatitis outbreak.
GIVEAWAY!!!!
To give you a reason to visit the other blogs helping me celebrate my new cover, I’ve come up with a Giveaway and a quiz about the Stonewall Inn and the 1969 uprising that made it famous. Find the answers to the questions below on the blogs participating in my cover reveal and giveaway (links below). Comment on my post on any of the participating blogs by midnight, July 31, 2014 for a chance to win a signed copy of the prequel, After Christmas Eve (U.S. residents only; ebook available for international winners—one winner per blog).
What was the legal environment in 1969 for NYC homosexuals?
Who owned the Stonewall Inn?
What made the Stonewall Inn a magnet for homosexuals?
What happened at the Stonewall Inn on the night of June 28, 1969 to cause the uprising?
Who/what started the Stonewall riots?
How long did the Stonewall Uprising last?
•    Tali Spencer's Brilliant Disguise
•    MA Church's Decadent Delights
•    Charlie Cochet's Purple Rose Tea House
•    Eden Winters' Magnolias and Men
•    Shira Anthony
•     Chris Koehler
•     Prism Book Alliance

Find out what Michael’s up to by visiting his web site (http://rupured.com), following him on Twitter (@crotchetyman), or by email (mrupured@gmail.com).