In this chapter, our story comes to an end. Torrey and Willem have come full circle and it’s time to give them their happy ending.

This week I chose the prompt: “Well, come on, man, get naked!”

Also, this week is the Hop Against Homophobia. My post is HERE and includes links to all the other participating authors. Did I mention the hop features prizes and giveaways? Enjoy! 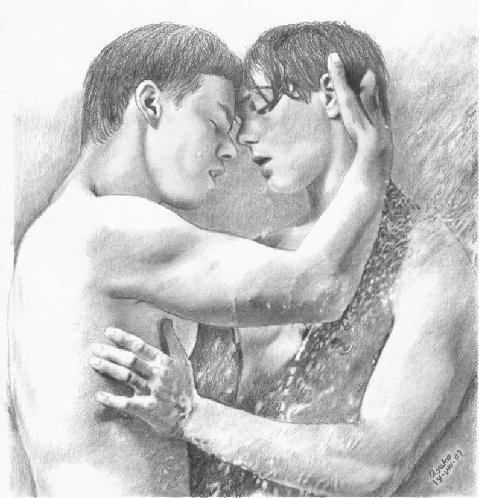 “Help me.” Hari’s plea fell in soft syllables. Torrey wanted to turn away but couldn’t. His soul was sick, because of Cyrrhi.

“You betrayed her, Hari. You let Bekatti in.”

Urdhva signaled two warriors to seize Hari and he screamed as they dragged him to his feet. Though he was taller, their strength surpassed his several times over. Urdhva stood before him and touched his face, then trailed her hand down his body to stroke his sex.

“You are too deadly to keep, too dangerous to gift, too beautiful to let live. Either you used Sovesa and Bekatti to your ends, or you allowed them to use you. Join them, then, in their reward. You will have a vr’nabi for your last mate.”

As the warriors carried him away, Hari shouted back at Torrey. “You don’t know what it was like! You’ve never been a slave!”

“All men are slaves,” Torrey said, though Hari was gone and would never hear him. Only Willem heard. And Urdva, who would not disagree.

“It is done.” Urdhva addressed her court, her gathered queens and subordinate females, the lifeblood of the nom. “Now we feast.”

The high terrace afforded privacy and excellent light. Spacious rooms opened onto the rooftop garden, which boasted a pool for bathing, and the interiors boasted furnishings fit for a queen. There was probably not a finer residence in all of Pesht’Dasa. Willem noticed how Jayn Prim nodded in approval of the recently appointed rooms.

“Urdhva’s going ahead with the bathing chamber for her Chosen. She sent these notes on the plans. I want you to look them over before I give them to the team.”
Willem took the rolled up plans in hand. Jayn had included him in several projects since he and Torrey had returned to the kumbh. He was even starting to like her a little. She’d been right about the training he’d needed.

“I wish Torrey didn’t have to go back into the nom so often.”

“Damas needs his counsel and Urdhva trusts Torrey to teach him. She desires her Chosen be trained in pan-nomari economics. Torrey is helping Damas reach his potential.”

Which was the same thing Torrey said whenever Willem brought it up. “What if She decides she’ll just keep Torrey, too?”

“Urdhva would never offend her Chosen or his kumbh—or this one—by taking Torrey. Two males of high status would create an impossible household and far too many complications.” Jayn laid a hand on his arm. “The day will come when Damas no longer needs a teacher.”

Maybe. But Torrey would still be sought out for advice, though Willem dared hope they would have long days and nights for each other.

As soon as Jayn left, Willem read over the plans and Urdhva’s notes. He scribbled his own notes to the team about some of the drainage problems presented by the half-finished chamber. He then left the plans on the table and walked outside to the bathing pool. The clear water beckoned and he stripped off his dejebba, tossing the loose garment onto a couch crafted of woven reeds. He slipped into the just slightly cool water and mentally thanked Urdhva for having ordered they be housed in luxury and seclusion.

Willem was still lolling in the shallows, allowing his body to soak up the sun, when he heard steps and rolling over to see Torrey standing at pool edge, watching him and wearing a huge smile.

“Hey. You look good,” Willem said. It was true. Torrey looked happy and relaxed, his body covered by a rich robe of blue silk threaded with gold and copper. The Silk Weavers had laden him with such gifts not just for his service but in recognition of a strategic new alliance between their two kumbhs.

Torrey hunkered down by the pool, his knees spreading the beautiful fabric of his robe. “I’m exactly where I want to be. In my kumbh, with other people… and you.”

Willem propped his elbows on the edge and gazed at him. The warmth from the sun was nothing compared to the heat Torrey wakened in his body. “Could we have been happy in the nom, do you think? If Cyrrhi had lived?”

Torrey nodded. “We’d be happy anywhere we were together. I think she wanted us to be happy. I think seeing us like this would make her happy.”

Torrey laughed and the sweet light sound filled the garden. The beautiful silk robe joined Willem’s plain one on the reed couch and the next thing Willem knew Torrey was in the water with him, slick arms around his shoulders and chest, pulling him away from the edge. And then Torrey filled his arms and their lips met, sealing breath between them as they slipped beneath the surface.

Willem filled his hands with Torrey flowing hair and held him to the kiss for as long as they both had air. When they surfaced, gasping and laughing, he pressed Torrey’s slender body against the side of the pool and continued to kiss him. Before long he was licking the droplets clinging to the hollow of Torrey’s throat.

“I love you. It almost killed me when you were Chosen, watching you leave. I thought you’d never come back.”

“But you sent parts of yourself into the nom to find me.” Torrey raised a hand and brushed back the wet hair that concealed part of Willem’s face. “Damas saw the moonflower you carved. I gave it to him and told him it would bring him luck. The way it brought you to me. Do you mind? I could try to get it back.”

“No.” Willem now understood something about the social importance of gestures. “Good if it brings him luck. He’s going to need it. All I need is you.”

Thanks for reading! I hope you enjoyed this story and can be happy for the boys as they move on. I’m not sure what I’ll write next.

If you’re looking for more fun, free fiction You can visit the Wednesday Briefers home page HERE for opening snippets and links to all the briefs. Or you can choose from the list below. Enjoy!