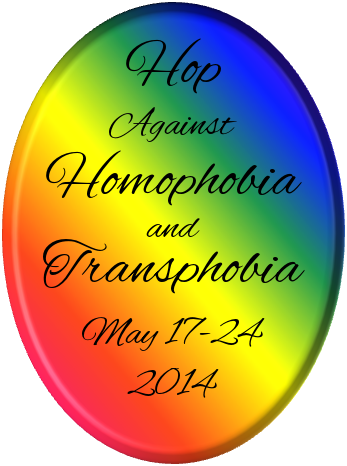 This post is my contribution… and it includes a giveaway. The details of the giveaway follow my post, but the short version is I’m giving away books and a gift card, and I do ship paperbacks overseas.

I didn’t grow up with gay people in my life, though my Dad was bi and I certainly knew men sexually interacted with other men. He talked frankly about sex and how it was fun but significant, and that finding one’s own gender attractive was just as natural as finding another gender attractive. I could imagine that. It always perplexed me when I ran into people who couldn’t, even though when it came to that kind of fun I was attracted only to boys. So I have Dad to thank for giving me an open mind about sex.

It didn’t occur to me before I married to find out what the future father of my children thought about homosexuality. Among my excuses are that I was really young, young enough to think opinions were shallow and not symptoms of bigger things like, say, intolerance. Besides, I was blithely heterosexual and there was no real need to go there. Or so I thought. Remember, I was young.

My husband’s partners in his medical practice included a doctor I’ll call Alfie. I didn’t know him well, though he seemed nice. We saw him socially once in a while. One day my husband explained there was something not right about Alfie: Alfie was homosexual. I knew what that meant and some things became clearer, such as why Alfie never brought a date for big social events such as Auxiliary Balls and the like. In those days, a man bringing a male partner would have been frowned upon. The reason my husband wanted me to know the reason for his dislike was that Alfie had invited us to his house and, well, hubby kind of needed to show up because the other partners would be there, too. He really didn’t want to go near the gays.

And so I went to the party and that’s when I found out about Benny. Benny was Alfie’s partner. Being naturally friendly and curious, I talked to them. Of course I did. They were the hosts and they were interesting. Among other things, I learned they’d been together for over 20 years, which at my young age impressed me enormously. They said they’d be married if that were possible and for the first time it occurred to me that, yeah, why not? They’d bought their house together, and it was decorated throughout with Benny’s work. Benny was an artist. I’d heard my husband belittle his paintings as being expensive but bad. They weren’t bad. They were beautiful. His landscapes were wild and brilliant, painted from open spaces and filled with heart. Alfie and Benny also collected glass art. They traveled. They had fun. I often heard other doctors and their wives snicker about them behind their backs, but I admired them because it was clear they were happy and loved each other. As far as I was concerned, everyone should be so cool.

My husband didn’t like my attitude and for many years I listened to him expound about the evils of homosexuality: how it was unnatural, fostered diseases (AIDS first appeared not long after I met Alfie and Benny), went against our religion, and that gays preyed on innocent boys—boys like our three sons. This was before scandals involving Catholic priests, which would have given me pause given our kids went to Jesuit schools. But I was convinced my boys were safe from gays. Cars and fireworks? Whole ‘nother story.

Benny died of AIDS. I wasn’t close enough to Alfie and Benny to go through this troubled time with them. I watched from a distance. I endured my ignorant husband’s rants, driven by a realistic fear that having a gay partner in the practice scared patients away. Hatred of homosexuality eats away at humanity. Misunderstanding leads to fear and fear leads people to some very ugly places. If you’ve ever seen someone go to these places, you know what I mean. My husband didn’t attend the funeral. I did. I have never seen a more heartfelt goodbye. Benny was loved and cherished.

I didn’t divorce my husband because he hated gays. He hated and feared lots of other things, too, including Jews, women, poor people, blacks, foreign cars, and lawyers. Quite frankly, I divorced him because I wanted to watch the Simpsons in peace and be with someone who didn’t have so many problems with me. But I will always be happy I married him, because I have three beautiful non-homophobic sons. And because of him I got to know Alfie and Benny, and through them my eyes opened not only to how two people can love each other so much, but also how other people can hate them for it. Dad never taught me about that.

I wish I had one of Benny’s wonderful landscapes, but I never will. I just have my memories of them and of how he brought a lot of beauty into the lives of those around him.

And he’s one of many reasons I take part in the Hop Against Homophobia.

So, you made it this far! If you leave a comment (and email so I can contact you) here on this post, you can WIN:
For more detail about the books, here's my Books by Tali Spencer page.

The blog hop runs through May 27th, so I will contact and announce the winners on May 28th.

Please visit all the other wonderful participating authors below.