"Most welcome, bondage, for thou art a way, I think, to liberty."
- William Shakespeare

Bondage is a beautiful thing. And MA Church writes bondage with both heat and heart. So what does she have to say about that...

A submissive is a person who makes a conscious choice to give up some or all control of their life to another person—a Dominant or a Top. Dominance and submission is about a power exchange between two consenting adults. It is about the control within the dynamics of that relationship, whether it be a full time 24/7 relationship, or a casual meeting, or a part time arrangement.

Choosing to be submissive means to allow someone else to control your body and behavior within the preset limits you and that particular person, i.e. the Dominant, have agreed upon. Submission is not a sign of weakness; some of the most successful and strongest people are true submissives.

Submission is not about passiveness, it is not about being a doormat—most submissives are intelligent and well-balanced people just fulfilling their basic desires to submit and to give up control. Submission is not about kinky sex and whips and chains—though those things can and do play a part in our lifestyle, it is much deeper than just that, and comes from the heart. Submission is a choice, and a wonderful gift to the Dominant—it should never be entered into lightly, even in a casual situation at a party or gathering. 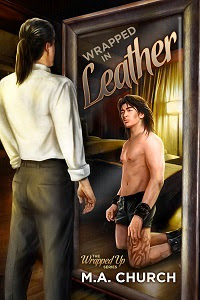 Blurb:
To celebrate his decision to take the next step with his boyfriend Ian, Toshi Baylor plans a romantic evening at their favorite steak house. Toshi starts the special weekend with a bang by surprising Ian at home with lunch. There’s a bang all right, but it’s between Ian and another guy.

Toshi and Jase find a mix-up with their reservations: a table for Baylor, not Taylor. When Toshi invites Jase to dine with him, they discover a mutual affection for leather and a shared belief that trust must be earned.

Before they can explore their common interests, Toshi suffers a series of attacks by vandals. Jase’s protective instincts kick in, but both wonder if it can lead to anything permanent.

Excerpt:
Jase placed his hand on Toshi’s arm, halting the smaller man. “Okay, as I was saying… Why not meet me sometime at the gym? You wouldn’t have to work out alone then, and neither would I.”
Toshi stopped hunting his car keys and looked up at Jase. “Really? I’d like that.”
Jase held his helmet under his arm. He really didn’t want Toshi to leave without knowing when he’d see him again or having some way to contact him. That alone surprised him, but he didn’t question the impulse, just went with it.
“Tell you what, let’s exchange numbers and I’ll call you… well, hell.” Jase wasn’t letting Toshi go without knowing something. “Why don’t you meet me tomorrow at three? We can work out.”
Toshi fiddled with his keys. “I, ah, yeah. That sounds good. Three it is. Just go easy on me, man. It’s been two weeks, at least, since I worked out.”
Jase zipped his leather jacket, debating how to answer, then threw caution to the wind. Better to see how Toshi would react now than later. “Going easy isn’t in my vocabulary. That’s not who I am. I push—that’s what I do. But I won’t push you any harder than what you… need.”
Toshi’s mouth opened slightly. “Oh. I, ah… I, oh. Three, right? Yes, I’ll be there.”
There was no mistaking the look of lust that flashed in Toshi’s eyes, and Jase felt himself respond. “Give me your phone.” After Jase programmed his number, he handed the cell back to Toshi. “Dress in street clothes and bring whatever you work out in. After we’re done, we can shower there, then grab something to eat or… whatever. And Toshi, I enjoyed tonight. Very much. Call me if you can’t make it.”
Jase put on his helmet and his leather gloves. He noticed the way Toshi eyed the leather he wore—that was promising—before he flipped the visor down. He looked at Toshi—both of them standing there, staring at each other. He made a point of glancing down at the front of Toshi’s pants, to where a nice bulge showed, before walking away.
Just as he started the bike, he saw Toshi hurry to his car. Jase pulled out and passed in front of Toshi’s car. He stopped, one foot on the road to balance himself. Toshi was just sitting there, doing nothing. Jase’s grin was hidden behind the visor. It looked like he had Toshi’s attention. He lifted his hand, making the motion of starting a vehicle. When Toshi’s car started, he nodded and drove off, very satisfied with what he’d seen so far.
He glanced in his rearview mirror as headlights turned in the opposite direction. He’d bet Toshi was a submissive but had no real training. That need was there, though. He’d seen glimpses of it during dinner and at dessert. It had been a while since he'd played with anyone who wasn’t in the lifestyle, but Toshi showed promise. If he wasn’t very much mistaken, they shared a common interest… leather.