Many years ago I was a new wife, new mother, and my in-laws came to visit. This was a big deal because they were visiting from Bolivia. That’s a long journey to make. And the ONE thing they wanted to eat was turkey.

At the time, turkey was not a common a meal in Bolivia. It still isn't. The bird is native to NORTH America. For Bolivians, a turkey dinner was so rare it was considered princely. My in-laws had never even seen a turkey, much less eaten one. So naturally their son said of course his wife would make a turkey for them! That’s how I learned people all over the world believe American women are born knowing how to do cook a traditional Thanksgiving dinner complete with sides.

Not true. My MOTHER was that woman, not me. So I called Mom.

Mom’s advice: Buy a Butterball turkey and follow the instructions.

As advice goes, it wasn’t much to work with. 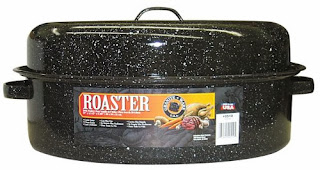 Knowing there had to be more to roasting a turkey than that, I embarked on serious research. There was no internet in those days, so I asked my friends for advice. Most of them had never cooked a turkey either. Next stop, the bookstore. An armload of cookbooks and hours of reading later, I assembled my collected knowledge and went to the grocery store—in June—where I bought a 20 lb. Butterball turkey and, from the hardware store next door, a gigantic enamel roasting pan to hold the darn thing. I combined Mom’s advice with the cookbook tips I thought sounded best and… the turkey turned out PERFECT.

Perfect. Not only that, but I repeated my feat so many times I am now legendary among a portion of Bolivians currently living there or in the United States. When they come to live in the U.S. they write to me in desperation as Thanksgiving approaches, asking for my help with their first turkey. After all, it’s not just the turkey, but the cranberry sauce (what are those? they ask), potatoes, stuffing, yams, glazed carrots, pumpkin pie, and corn fritters. Every cook eventually makes the meal their own, but I'm happy to give them recipes and tips to start with. A Thanksgiving turkey is a rite of American passage as significant as citizenship.

I’m glad my first turkey turned out so well. It could have been a disaster, but it wasn’t. That may be one reason why Thanksgiving is still my favorite holiday. The kids have grown up but I still use the same pan I did for the first turkey I ever made. It's never let me down.

Everything about Thanksgiving, from the food to the celebration, starts with family and celebrates community. At least for now, until creeping commercialism overwhelms it, the holiday remains rooted in family traditions and all the thousand stories people bring to the table along with that year’s bird.

Like the one my family has... about a traditional Thanksgiving dinner at Disney World. Trust me, it's classic!

Happy Thanksgiving!
Posted by Tali Spencer at 4:00 AM