I’m continuing the story of Willem and Torrey, whose love for each other makes for an uneasy fit in an alien society. This week the prompts were: “Did you really think that would scare me?” or “Yo mama’s so scary...” or “Suck on that, big boy!” or “This place made the Bates Motel look like Disneyland...” or “I want my mummy!” or “You got candy? I only got rocks!” or feature a haunted house or a vampire or any Halloween creature or have your character in costume or use the Great Pumpkin or “When did you get to be so smart?” or have a character playing a video game or have a potato sack race or have a character watch NASCAR. 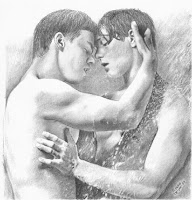 “Once you are inside the nom, we cannot protect you, not truly. We can only try.” Jayn sounded tired, and old. Lines of care creased the skin bracketing her lips.

Willem adjusted his work belt, glad to be wearing tools again. A sturdy chitin case at his feet held his larger tools. Though Jayn was certain he’d been included on the team for reasons other than to do stonework inside the nom, he still hoped for it. Humans had created works of wonder inside Pesht, most known only through drawings and rumor. Havar’s Folly. Vayna’s Chamber. The Throne of Kavra. If he could lay eyes on any of these works… or create such a work of his own for the ages….

“Yes, Kumbharani. I will honor the rules and not present myself in any way that would tempt the nomari.”

“You only need worry about the queens or the intelligent females. Warriors don’t care and workers care even less.” She fussed with his veil. Men who went into the nom did so concealed from the hairs on their head to the soles of their feet. He’d bathed and scrubbed and been massaged with doje oil to dampen his scent. “We do not know why She sent for you. Her reasons will become clear. She has promised to house the team safely, and I assume that means you also.”

“He will write to me now, or someone else. Your situation worries me more.”

“I’m not pretty enough to tempt a queen.”

Jayn laughed. “A scar does not make you ugly, or less useful in bed. Not perfect enough to be a trophy, perhaps, but you could serve very well in private. Junior queens with no means and no dominance or power scheme to acquire males with less to offer than you. You are a son of this kumbh, a skilled artisan, healthy and in your prime. Don’t think for a moment you would not tempt any of them.” Her arms stretched above her head as she reached for his veil and pulled it down over his face. Now she resembled only a shadow, without features, only a voice. “You will be watched. If you see my son, follow his lead in every encounter. He will let you know what to do. And if you do not see him, stay with your team. Do your work. Never let yourself be separated from them.”

A large palanquin waited in the courtyard. After placing his case into a rack carried by a squat, silent nomari worker, he entered the palanquin. Inside, he joined the rest of the team, four women wearing tool belts just as he did, but without the obscuring veil.

“That’s ridiculous,” said Shel, giving the fabric a tug. “Push it back. We know what you look like.”

Curtain in place, the conveyance lurched and rolled for a moment, then balanced and they were on their way.

“The veil stays.” Lena Hal had a tiny voice but the bite in it caused Shel to stop.

“And is he going to work in it? He can barely move.”

“Or breathe.” Willem lifted the gauzy material away from his face and tucked it behind his shoulder. “Only until we get to the nom,” he promised Lena, whose fierce glare he wanted to turn toward something else. “And if the curtain opens, this comes right down.”

“This is some sort of queen game, you know. You shouldn’t even be on a team, not any team that goes in there.”

Marda Kwin shot him a look that said he’d have to back up that statement later.
“And you’re male, which means we have to protect your ass and make sure none of the junior queens catch sight of you or get bright ideas. There are reasons men don’t go into the nom on work teams!”

“That doesn’t matter to them,” snapped Lena.

Willem’s cheeks burned. It was getting damn hot in this closed container. Leaving the kumbh was the strangest thing he’d ever done, sitting with a group of women in a luxurious box borne upon the shoulders of immense nomari workers bred specifically to be beasts of burden. He was leaving everything he knew behind and going toward things that would be completely alien. Starting with this.

“I know what to do. I won’t show my face, any part of my body. I won’t speak. I will always stand behind the women.”

Lena exchanged glances with Marda, Shel, and a cutter named Rue before turning back to him. “When did you get to be so smart?”

“The day Torrey left and I realized I wouldn’t see him again unless I was smart.”

“Just because we’re going to the Queen’s chambers doesn’t mean any of us will see Her, or him.”

“And even if we do,” said Marda, “what are you going to do, run up and kiss him? Do I have to explain how that’s not a good idea?”

Rue barked with laughter. “Maybe it would be. I’ve heard about her little quirks.”
Willem wanted to hear more about Cyrrhi’s ‘quirks’ but to his disappointment Lena stopped Rue from continuing. “There won’t be any of that. We’re going in for a job. We’re going to do a job. We’re going to carve a bathing chamber for the Queen’s Chosen. It might take us months, maybe a year. Maybe we should wager our chances of going that long without either Cyrrhi or one of her junior queens snatching Will here.”

Rue laughed. “Not a chance.”