Welcome to Layla M. Wier and a chance to discover not only another great book -- look at that cover, this one hit my cozy hot spot and went straight on my list! -- but to win something warm, fuzzy and, yes, homespun just in time for winter.


Hi, and thank you to Tali for hosting me today! This is the second stop on my blog tour for my novella Homespun, coming out tomorrow (Sept. 18) from Dreamspinner Press! During my blog tour, which runs 'til Oct. 8, I'm giving away a handmade scarf, knit or crocheted by me specially for you, in a style and yarn color that you get to pick! (This would also be a great holiday gift for someone else!) More details here:

http://laylawier.wordpress.com/2013/09/09/scarf-giveaway/ - you just need to comment on any of the posts in the tour to be entered. 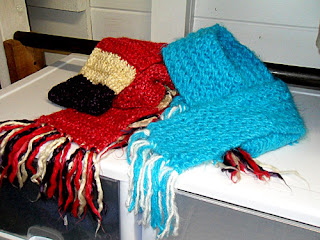 And that's a great lead-in to the topic of today's post: sharing your passions! No, not that kind of passion -- at least not quite! Knitting and other fibercrafts are a great (platonic!) love of mine, as you can probably guess from the scarf giveaway.

Writing is, in some sense, all about sharing passions. You have to love your characters in order to get other people to love them. And it's not a simple matter of telling the reader "This character is wonderful! Love them!" In fact, that's a pretty sure route to a character who's roundly loathed by all. Instead you must take the reader by the hand and lead them to it gently. I don't know how many of my favorite characters are the ones who snuck up on me, the ones I didn't even realize I'd love from their first introduction, only to look back twelve chapters later and discover I'd grown to adore them.

It's not just characters, though. As writers, we fill our books with the things we love. Homespun is very much that way for me. It's a book that is full of my favorite things: autumn and fibercrafting and farming and painting; rural living and communication issues and difficult, complicated relationships.

(Unless they're into that.)

When I wrote the first draft of Homespun, I told myself that I was writing it just for me. No one ever had to see it. The whole thing could be as much of an exercise in id-stroking as I wanted it to be.

But on the revisions, I had to ask myself to see it from a reader's perspective. This often meant asking myself if I needed to explain things a little better, or whether I really needed this many paragraphs talking about sheep; could I cut it down a bit? The trick is to learn how to say "I love this thing! Come here and let me show it to you!" without also jumping up and down, waving your arms at the reader, and generally making a nuisance of yourself.

I have always balked at a lot of writing advice that describes writing as a hard, desperate, lonely process full of soul-wrenching despair. "Kill your darlings", the adage runs -- which means not killing characters (as it's sometimes taken to mean), but never becoming so attached to any part of the story that you can't cut it if you have to.

I am wary of putting too much credence in that advice. I think the parts we love best are loved for a reason, and the lines of dialogue or descriptive passages that shine in our eyes are worth saving. A story's writer is also its greatest fan, and that's as it should be.

I try not to look at revision as a purely rational, objective exercise. I don't ever think I can be objective about my own work, and I honestly don't think it's a state to be sought after. Instead I think of it as learning to see it through someone else's eyes, the eyes of someone who's just come to it fresh and new. What do they see, this hypothetical new reader? What do they love, what do they hate, where do they get bored?

Don't kill your darlings. Nurture them so that they can be all they're meant to be. 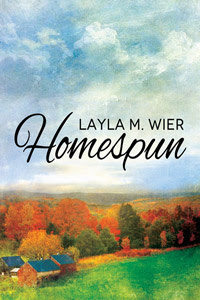 Blurb:
For twenty years, Owen Fortescue, a down-to-earth farmer in upstate New York, has had an on-again, off-again relationship with volatile New York City artist Kerry Ruehling. Now that same-sex marriage is recognized in New York, Owen wants to tie the knot. But Kerry responds to the proposal with instant, angry withdrawal. Owen resolves to prove to Kerry that, regardless of the way his family of origin has treated him, family ties don’t necessarily tie a man down. With help from his grown daughter, Laura, who loves them both, Owen hopes to convince Kerry that his marriage proposal isn’t a trap, but a chance at real love.

About Layla:
Layla M. Wier is the romance pen name of artist and writer Layla Lawlor. She was born in a log cabin in rural Alaska and grew up thirty miles from towns, roads, electricity, and cars. These days, she lives in Fox, a gold-rush mining town on the highway north of Fairbanks, Alaska, with her husband, dogs, and the occasional farm animal. Their house is a log cabin in a birch and aspen forest. Wolves, moose, and foxes wander through the front yard. During the short, bright Arctic summer, Layla enjoys gardening and hiking, and in the winter, she writes, paints, and draws.