Today I welcome fellow author Tempeste O'Riley. Her new book, Designs of Desire, is climbing the charts and has an engaging protagonist in James Bryant, who may need crutches to get around but never lets that stop him from enjoying his life--or falling in love with Seth. Tempeste kindly agreed to interview this amazing young man and share a passage from his story.
~~~~~~~~~~~~

Today we have a little “mini” Q-n-A with Seth Burns, one of the MC’s of Designs of Desire, by Tempeste O’Riley. I hope you enjoy getting a peek inside Seth’s head. Don’t forget to check out the book and giveaway below.

Which living person do you most admire?

At one point that would have been a tough question, but now that I’ve meet James, I would have to say James is the person I most admire. His quiet mixture of strength and passion inspire.

What do you most value in your friends? And who do you consider your closest friend?

Loyalty. Pure and simple. I have many acquaintances, but few I would truly claim as personal friends. Mel is both my best friend and my lawyer, so he’s closest friend, and the holder of all my deepest secrets, lol, though don’t tell him that.

What is your favorite body part on a man?

If I must pick only one part, I would have to say eyes. They are the windows to the soul after all. James’s are the most beautiful I have ever seen.

What is your idea of the perfect evening?

Danni on the floor drawing, James curled against my side, some soft music on the stereo, and a whisky in hand. I have found that life cannot get better than that, though hot, passionate sex with my love is a very close second. ;c)

What do you consider your greatest achievement?

At one time I would have said starting college early. I graduated at 15 thanks to an accelerated program I participated in, and was very proud of that accomplishment, but now, it pales and flies away in the light of winning the love of James. He is not the easiest man to get close to, so slipping past his defenses and becoming his partner is my greatest achievement and happiest moments now and forevermore.

James gestured to the chair across the conference table and hoped Seth would sit. He hated to be stood over. Seth smiled and settled into the chair indicated. “Now, what can I do for you, sir?”
“We, Carrington Enterprises, are beginning a new venture and hope you can help with designs. Companies I can manage; design and draw, not so much.”
James nodded at Seth’s pause.
“Let me start by explaining the project you will brand. We’re opening a new hotel chain. This will be a little different than your usual hotel, though. Each site will be more like a large bed and breakfast, but they will cater to the GLBT community. It’s often an issue when a couple wants to vacation. They have to consider the area, the hotel, the other patrons even if they want to do something as simple as hold hands. That is, if they don’t want to be met with hate or possible violence.”
James wasn’t sure which impressed him more, the wonderful idea behind the hotel or the deep, commanding voice that instilled confidence in everything he said.
Obviously unaware of James’s internal dialog, Seth continued his spiel. “With our liberal policies and views, we have decided to make a place where judgment doesn’t exist. At least, that’s the theory.”
God, that voice! He shivered.
“Also, each site will have a club, bar, or restaurant attached. So, this will be an ongoing project, not a one-shot deal.” When finished with his little speech, Seth seemed inordinately pleased with the idea.
No wonder Brian gave me the account. He didn’t realize he had spoken aloud until Seth glowered at him.
“Excuse me?” Seth snapped. “I was assured you have no personal issues or biases that might hinder your ability to provide the needed work. Was I incorrectly informed?”
“No. No, sir. I apologize for my comment. It was out of line,” James said in a rush, trying to smooth over the obvious irritation his thoughtless words had caused.
“Are you able to do the branding or should I continue elsewhere?” Seth demanded.
“You misunderstand, Mr. Burns. I had wondered why I was given your account, considering I’m not one of the senior designers and your account would normally be reserved for one of them. Now that I hear what the project is, I understand why I was chosen.” He knew he was babbling but he couldn’t help it. “You see, I’m the only openly gay designer here and my family runs a small bed and breakfast. This project is perfect. In fact, once we have the branding set up, I’m sure I can point you in the right direction for some specialized marketing. Magazines, newspapers, websites, etcetera. We will help you with all of that, as well.” James tried to restrain the extent of his excitement over the project, but was unsure how successful he was. He didn’t want to seem flippant or inexperienced after admitting he was a junior designer with Skye Designs.
Seth raised an eyebrow and smiled. “Excited, are we? Carl said you were the man for the job. I guess he was right if enthusiasm counts. I have a full write-up of what we need and what we do and do not want to incorporate into the brand.” His smile fell and he became all business again. “This is an upscale getaway, not a high-priced bathhouse.”
“Understood, sir. I think the idea will work in areas with a large enough population of GLBT and open-minded people.” His hands itched to begin sketching and planning.
“Good. Once you’ve read over everything and start your designing, I want you to visit the site we chose for the first hotel. It’s here in Milwaukee, so it shouldn’t be too far for you. Would you be ready by Friday?” At James’s accord, Seth opened his briefcase and began pulling out folders and large manila envelopes and setting them in front of James. He paused, peered up at James, and blinked hard. “I should call someone to carry these things for you,” he mumbled, glancing at the items and toward James’s crutches. “You can’t fit all this in your bag.”
James pinched the bridge of his nose while counting to ten in his head. Why do they always see the sticks instead of me? “Mr. Burns.”
“Seth, please,” he interrupted, giving James a soft smile.
“Seth, Chase acts as my assistant when needed. He will tend to anything I can’t transfer up to my office personally. There is no need to be concerned.”
A strange look flashed across Seth’s face, but his expression quickly returned to his previous in-command smile. “Very good then.”
They chatted a bit about ideas and plans before Seth shifted his coat sleeve back to check his watch. With a slight frown, he said, “Well, I need to head back to the office. I will leave this all in your fine hands, James. Please call me here.” He pulled out his business card and wrote something on the back. “I look forward to our next meeting.”
Seth held out his hand. James flexed his fingers and clasped the offering. He knew this was for work, but somehow it felt different this time. Warm and strong, the grip shot tingles up his arm. Seth seemed to hold on a little longer than necessary for business needs. It had been so long since a man touched him, at least without violence or pain. James shook off the thought he might be interested. Beautiful men like Seth didn’t waste their time on guys like him. Besides, he wasn’t certain he wanted to go down such a painful road again.
James stood in the doorway, watching Seth saunter out the main doors, wishing for something, though not really sure what. 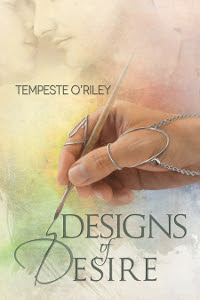 Description:
Artist James Bryant has forearm crutches in every color from rainbow for fun to sleek black for business. He even has a pair with more paint splatters than metal. After his family’s rejection and abuse from a man he thought loved him, James only just gets through the day by painting. He lives in constant fear that he’s not worthy of anything, let alone love.
As CEO of his company, Carrington Enterprises, Seth Burns is a take-charge kind of guy, and he is instantly smitten by the artist helping with his newest project. When he witnesses James suffer a panic attack, a protective instinct he never knew he had kicks in. He truly believes nothing is unobtainable—including James—if he’s willing to put in the time and effort.
James is shy and confused by Seth’s interest in him as a person. With Seth’s support, can he work through his fears to finally find the true love he deserves, or will someone finally land the crushing blow he won’t survive?

Tempeste O’Riley is an out and proud omnisexual / bi-woman whose best friend growing up had the courage to do what she couldn’t–defy the hate and come out. He has been her hero ever since.
Tempe is a hopeless romantic that loves strong relationships and happily-ever-afters. Though new to writing M/M, she has done many things in her life, though writing has always drawn her back–no matter what else life has thrown her way. She counts her friends, family, and Muse as her greatest blessings in life. She lives in Wisconsin with her children, reading, writing, and enjoying life.
Tempe is also a proud member of Romance Writers of America® and Rainbow Romance Writers. Learn more about Tempeste and her writing at http://tempesteoriley.com.