I met T.C. Collins when I answered her post on a writing site asking for someone willing to help edit her stories there. After my usual disclaimer (“I'm a writer, Jim, not an editor!”), I volunteered. Why would a crusty old veteran like me take on a brand new writer? Because T.C. Collins tells a good story and writes some of the hottest sex scenes around.

Shadows of Light is her first published book, a dark thriller about Matty, a psychic hiding from his past as an exploited child, and Adam, the handsome detective with whom he reluctantly teams up to stop a serial killer. It's great fun and I'm thrilled to feature it today. 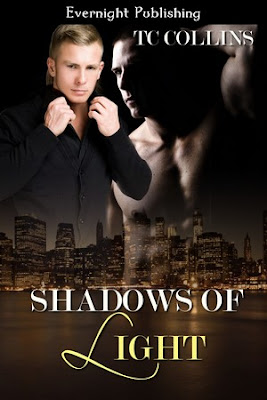 Matthew Rose is a reclusive psychic on the run from a mad psychologist. Held captive and exploited as a child because of his ability to connect minds with serial killers, all Matt wants now is to be free of his visions. His desire for peace is shattered when he sees the woman from his most recent vision lying in a pool of blood.
Adam Rivers, the homicide detective assigned to the murdered woman’s case, quickly realizes Matt is more than a witness. Adam fights his attraction to Matt because he doesn’t see himself as gay.
As the murders mount, Matt and Adam work together to defeat the killer—unaware that the mad psychologist from Matt’s past has returned and is determined to reclaim his prize. Can Adam keep Matt safe from the danger that surrounds him or will he lose the man he is just now realizing he loves?

Adam walked out of the bathroom with a towel wrapped around his waist. He’d obviously just gotten out of the shower because his skin glistened.
I watched, mesmerized as a water droplet began its slow, delicious descent from his neck, to his surprisingly hairless chest, past the fresh bandage a nurse had just applied before leaving the room, and down his very sexy six-pack, to the intriguing treasure trail to disappear into the towel.
I licked dry lips, vaguely aware of the increase in my heart rate and choppy breathing. The only thing I could think of was following the trail of the water droplet.
Oh my, I breathed.
Adam’s towel began to tent as I watched. Drawn like a bee to honey, I was halfway to Adam before I became aware of it. I stopped in front of him, nervous, and reached out a hand laying my palm on his chest. My heart was pounding as I touched an erect, brown nipple.
Adam groaned and grabbed my wrist. I looked up at him, dazed. His lips moved but I was beyond hearing.
Must taste. The urge obliterated everything else.
I stood on tiptoe, grabbed a handful of his dark hair, and yanked his mouth to mine. Delighted moans filled the silent room. Adam wrapped an arm around my waist and yanked me into all that hard male strength. My knees buckled and my erection stretched within the confines of my jeans.
Adam licked into my open mouth, his tongue chasing and dominating mine. I shuddered at the heat smoldering inside me. Pleasure flowed, heightening sensitive nerve endings. I pressed further into Adam, trying to get as close as possible. His hands journeyed from my hips to my bottom, kneading.
Oh god!
It was the hottest thing I had ever felt. A whimper escaped and I felt Adam’s groan vibrate in his chest. Pre-cum leaked from my cock. I rubbed it against his stomach to help alleviate the pain. I’d never been so turned on in my life and it was exhilarating. I felt as if I was flying and free-falling simultaneously through a pit of molten lava.
Adam twined his tongue around mine, trapping it. His tongue tasted every crevice in my mouth, leaving no part unattended. His kiss left me feeling ravished and the feeling became addictive.
I broke our kiss to gulp fresh air. Adam rumbled his protest and one of his hands left my butt to grab a handful of my hair and jerked me back to his lips. I had never felt so needed before in my life and I melted into the kiss, my surrender complete. Adam snarled his approval and tightened his grip. He staggered us to the bed. I felt him wince and pulled back from our kiss.
“Maybe we should—” I began before Adam claimed my lips again.
I looked down as he laid me on the bed. Oh wow! Adam’s towel had slid to the floor and he was enormous. His cock had to be at least eight and a half inches long and he was thick. The mushroom-shaped tip was an angry red, pointing straight toward me as if in silent accusation.
Fear shot through me and I scrambled backward on the bed. What the heck do you think you’re going to do with that thing? I shouted at him through our bond. There was no way I was letting him get within six feet of me with that monster leering at me.
Adam laughed and grabbed my ankles to keep me from kicking him. He dragged me toward him spreading my thighs so he stood between my splayed legs. He leaned down and nuzzled my neck before placing a soft kiss there. Despite my fear, I shivered in reaction.
Is this your first time, baby? he whispered, using our bond. Goose bumps pebbled my skin. His voice was just so…sexy and using telepathy heightened its appeal.
I grabbed a handful of his hair and buried my face in his neck. Shyness had overcome me and I found it difficult to meet his gaze. My gift and the threat of Dr. Johannasan wouldn’t let me get close to anyone. Plus I didn’t trust anyone enough to try.
Adam lifted his head and the fierce possessiveness seared me in place. Good, he growled. Adam lowered his head to kiss me again.