I want everyone to give a warm welcome to Rob Colton. I’ve been following Rob’s writing career for a long time and was thrilled when I learned he’d taken the big step toward publishing his work. I also think his first published book, The Ranch Foreman, is wonderful!

I’m Rob Colton and I’m here to talk about my new release, The Ranch Foreman. But first, I want to thank Tali for having me today. Thanks for your support!

Before we get to the excerpt, I wanted to take the opportunity to give some advice to first time authors. As a first timer myself, I’ve had several people ask me questions and hopefully I can help some people along the way.

My first piece of advice is to write, and keep writing. Read all you can get your hands on. Practice makes perfect.

Put your stuff out on the Internet. Set up a blog or use an established site like GayAuthors.org. If your stories are compelling, you’ll begin to get feedback and start to develop a following.

It is so important that you hook up with a beta reader and an editor—they could also be the same person. The beta reader can give you feedback and suggestions before you publish the story. An editor will help make sure you don’t have any grammar or spelling errors. Sites like GayAuthors.org are great at helping you find beta readers and editors.

Once you have written your masterpiece, try to find a well-established author to help mentor you. They can guide you through the process of getting your book ready for a publisher.

Finally, be fearless and submit! 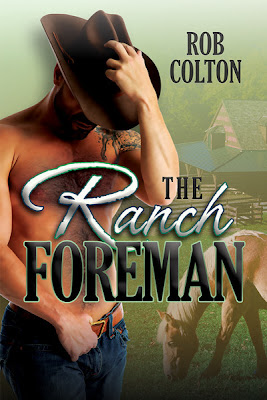 When Madison “Matty” Ward finds himself out of work and without a place to live, his cousin comes through with a job on the Gates cattle ranch. Despite not knowing anything about herding cattle or taking care of horses, Matty does his best to impress the older hunky foreman, Baxter Hollingsworth. Baxter is drawn to the new young hand, but he’s deeply closeted, and after an openly gay veterinarian shows he’s interested in Matty, Baxter’s repressed feelings lead to an explosive encounter. Baxter then withdraws—leaving Matty feeling angry and used—until an accident forces him to confront his fears.

Matty slowly opened his eyes. For some reason, he was lying flat on his back on the soaking-wet ground. He felt like he had been run over by a bus. The storm still raged around him, and he blinked rapidly as he tried to focus on his surroundings.
Someone was shielding his head with a jacket. Not that it helped too much. He was still being pelted with rain. Matty looked around, trying to get his bearings. A flash of lightning illuminated Baxter pacing back and forth nearby, muttering to himself while Brian leaned over Matty’s head, holding the jacket.

Matty looked up as Brian’s face leaned over even closer.

His cousin gasped in surprise and shouted, “He’s awake!”

Matty lifted his hand and swatted his cousin away. “Gimme some room.” Matty groaned and rubbed the middle of his chest with his palm. “Ow…. Oh fuck….”

“The tree twisted. A limb smacked the shit out of you, knocked you clean out for a couple of seconds.” Brian let out a ragged breath. “We thought you were dead.” Brian’s voice cracked.

“I’m fine.” Matty tried to sit up, but the pain in his chest and a throb in his head forced him back down. “Fuck, that hurts!”

At the sound of Matty’s pained cry, Baxter spun around on his heels. The cowboy was wide-eyed in shock, yet furious at the same time. He stormed up to Matty and dropped down to a squat. He grabbed a fistful of Matty’s shirt collar, then quickly let go.

“Of all the stupid—” he shouted. “Are you trying to give me a fucking heart attack?!”

A smart remark was on the tip of his tongue, but Dobby pushed forward with George, interrupting. “You okay, kid?” When Matty nodded, Dobby looked back to Baxter. “Boss, we got the herd rounded up.”

Baxter looked back at Dobby and nodded. “Get the fence repaired. I’m gonna take Matt back.”

“I can stay and help,” Matty protested as he tried to sit up.

At the look Baxter shot him, Matty knew better than to argue this time. Baxter and Brian helped Matty to his feet.

“I lost my hat,” Matty said as the cold rain pelted him in the face, forcing his eyes closed. His head throbbed and his stomach rolled and it hurt to breathe. Okay, so maybe he wouldn’t be much help.

“Take Chestnut back for me.”

Matty assumed Baxter was talking to Brian, but he didn’t open his eyes to look. Instead, he leaned against Baxter’s big body and let his strength hold him up.
When they got back to the bunkhouse, Baxter helped Matty up the stairs, straight to the bathroom. Matty sat on the wooden bench and quietly watched as Baxter fetched a first aid kit, some painkillers, and a glass of water.

Matty downed the painkillers and handed the glass back to Baxter.

“You’re bleeding from a cut,” Baxter noted. Baxter set the glass down and shrugged his heavy canvas coat off. He turned Matty’s head aside and examined the cut on his forehead. “It doesn’t look too bad.”

As he worked on Matty, he quietly spoke. “When I saw you go down and you didn’t get up… I thought you were dead.” Using a washcloth and peroxide, he wiped the cut clean, and then placed two large Band-Aids over the cut. “I’m glad you’re not.”

“Me, too,” Matty said with a smile and a chuckle, trying to lighten the mood some.

Baxter didn’t react to Matty’s comment. He remained serious as ever while he started on Matty’s clothes. He pulled off Matty’s coat, then squatted down and tugged off his boots.

Despite his head and chest hurting like hell and shivering from the cold of being soaked to the bone, Matty found himself getting aroused.

The crabby cowboy was being soft and tender and taking care of Matty when he needed it. Unfortunately, that seemed to be the only time Baxter acted like he cared. But maybe he wasn’t a complete lost cause after all.

And maybe Matty had bumped his head harder than he thought.

Rob Colton is a software developer by day, and avid reader of romance novels at night. A romantic at heart, he loves stories that feature big, burly men who find true love and happy endings.

Rob grew up in northern Michigan and currently lives in the Atlanta area with his very supportive husband and their very spoiled miniature schnauzer.
Author Links: