Fafhrd, the Mouser, and Me 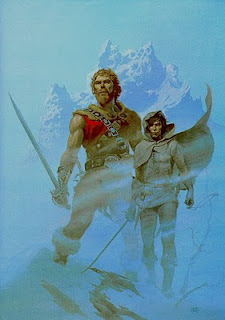 When a prompt about a unicorn, a mandolin, and some kind of plant inspired me to write something fantastical and slightly absurd, I reached into my head and pulled out a giant barbarian to serve as the main character. That character became Vorgell and the story turned into Thick as Thieves.

That there was a giant barbarian in my head in the first place—and also in the heads of so many other writers of high fantasy—is due in no small part to Fritz Leiber and his marvelous creations Fafhrd and the Gray Mouser. Of all the barbarians and thieves in fantasy land, these two are by far my favorites.

If you haven’t heard of Fafhrd and the Gray Mouser, you clearly haven’t read enough fantasy from the Golden Age of the 1960s and 1970s. Fritz Leiber practically invented sword and sorcery along with Robert Howard. He also has official credit for giving the genre its name. When I was just a gangly girl in braces and eyeglasses, already enamored of stories about faraway places and bigger than life characters, I discovered Leiber’s tales about a couple of men whose world and adventures captured my imagination. 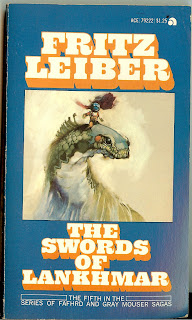 The stories of Fafhrd and the Gray Mouser are set in the whacked out world of Nehwon (yes, that’s Nowhen spelled backwards), overflowing with crusty gods, bloodthirsty tyrants, devious wizards, and just plain craziness in everything from denizens to geography. But what really captured the minds of readers were Leiber’s colorful characters, as fine a pair of scoundrels as have ever been written.

Here are the opening lines of The Swords of Lankhmar, a later novel in which Fafhrd and the Mouser are already boon companions:

“I see we’re expected,” the small man said, continuing to stroll toward the large open gate in the long, high, ancient wall. As if by chance, his hand brushed the hilt of his long, slim rapier.

“At over a bowshot distance, how can you—” the big man began. “I get it. Bashabeck’s orange headcloth. Stands out like whore in church. And where Bashabeck is, his bullies are. You should have kept your dues to the Thieves Guild paid up.”

“It’s not so much the dues,” the small man said. “It slipped my mind to split with them after the last job, when I lifted those eight diamonds from the Spider God’s temple.”

The big man sucked his tongue in disapproval. “I sometimes wonder why I associate with a faithless rogue like you.”

The small man shrugged. “I was in a hurry. The Spider God was after me.”

Right away you know you’re in for some fun. 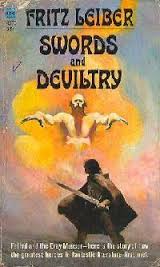 Fafhrd is a seven-foot tall barbarian with red hair, a gift for languages, and a romantic soul. He escapes the matriarchal culture of his icy homeland, and his controlling mother, to search for civilization and adventure. He’s smart and stubborn. The Mouser never knew his parents and has no other name. He’s small and dark, clever, reckless and trusts no one. I loved him. And I adored them together. They drank with abandon, fought with flair, lived large, and attracted trouble like no one else ever had before or since. My girlish imagination could envision no finer men. I spent much of my youth hoping to find a real live man who could inspire in me even a smidgeon of what these two men had together.

Leiber says it best when he describes Fafhrd and the Gray Mouser’s first meeting:

As the twain eyed each other challengingly through the murky fog lit indirectly by distant torches, they were already dimly aware that they were two long-sundered, matching fragments of a greater hero and that each had found a comrade who would outlast a thousand quests and a lifetime—or a hundred lifetimes—of adventuring.

A later book describes their bond as “…firmer than a rock, stronger than steel.”

And that’s it precisely. That’s why I have these guys in my head. 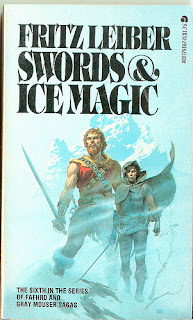 As characters written for pulp fantasy, Fafhrd and the Gray Mouser do the usual (for the era) manly thing and pursue any number of beautiful young wenches. Most of these women are nothing but window dressing. Even when they're not, they never get between the two men. After a while, the women seem mostly to be there to head off thoughts of a homoerotic subtext. Despite the author's efforts, I always saw the men’s most passionate bond as being with each other. Had fan fiction then been what it is today, there would have been slash with Fafhrd and the Mouser as a couple. Lusty, strong-willed, feisty… they’d be completely hot together.

As it is, there are charming hints of a more intimate relationship in the story “Bazaar of the Bizarre (1960)” (Swords Against Death, 1970), wherein the men steal—and then share—a house. And there’s this passage, in The Swords of Lanhkmar, where Fafhrd is with his Ghoulish girlfriend and has just learned the Mouser is in danger:

“You’re leaving me,” she asserted in a flat voice.

“Yes, Bonny Bones, I must ride south like the wind,” Fafhrd admitted hurriedly. “A lifelong comrade’s in immense peril.”

“A man, of course,” she divined with the same tonelessness. “Even Ghoulish men save their greatest love for their male swordmates.”

“It’s a different sort of love.”

Admit it, Fafhrd! You can’t live without the guy—and part of me, even as a teen girl, always wondered where they might go with that.

Although very little Fafhrd and the Mouser slash exists, I can direct anyone interested to this lovely short piece by Mary Crawford, who beautifully captures Leiber’s style and the personalities of these characters. It also fits brilliantly within the canon. 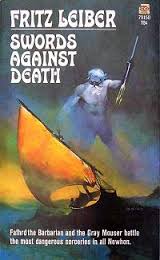 The adventures of Fafhrd and the Gray Mouser are best read in the original order of publication, but that's no longer possible without doing way too much research (as to that order) and work. For my money, the best book to start with is The Swords of Lankhmar (1968), which actually is a fully realized and wonderful novel that captures everything great about Nehwon and our heroes.

Swords and Deviltry (1970) is a collection of three shorts which includes “Ill-Met in Lankhmar,” the novella in which Fafhrd and the Mouser meet.

Swords Against Death (1970) is a collection of ten stories that range in quality from jaw-dropping brilliant to simply great fantasy. My favorites are "The Jewels in the Forest," "The Howling Tower," and "The Bazaar of the Bizarre."

Leiber’s prose is not as spare as the current fashion and occasionally wanders into blooming purple, but his imagination is breathtaking. His descriptions often amaze. The witty dialogue is sometimes profoundly philosophical. And his characters Fafhrd and the Gray Mouser? Awesome!
Posted by Tali Spencer at 9:29 AM