Lane Hayes and I are book release mates. Her novel and mine were released on the same day. She may have been a sweet unpublished book virgin before, but now she's a sweet published author with an amazing, heartfelt book being loved by her readers... so I invited her here to talk about it.

My new book (and yes... first ever) Better Than Good was released July 8th.  It is a story of self-discovery and ultimately acceptance.   Of course, it’s also a love story because truthfully, that’s my favorite kind of story.  I will read almost any type of genre, but the ones I end up enjoying the most have at the very least a side note love story.  I gave up feeling guilty that I wasn’t reading War and Peace equivalents long ago.  Been there, done that.  Now I happily read my M/M romance novels when I’m not busy trying to pen them myself.

Matt and Aaron, the main characters from Better Than Good have been in my head for some time.  I think of myself as sane (well mostly), but I swear I could hear very specific conversations between them and knew it was somehow crucial that their story be told.  I remember once reading about an author saying how she could smell her characters, which yeah... sounds a little strange, but I totally get it.

Better Than Good is told from Matt’s point of view.  He relates at the beginning of the book that he had literally seen the most beautiful person ever, male or female.  That person is Aaron.  A beautiful, self-confident and lively out and proud gay man.  Nothing is the same for Matt after that first chance encounter.  It doesn’t matter that he’s straight (or has identified as such) or that he has a girlfriend.  Matt wants Aaron, but will have to come to terms with how he views himself and the labels he identifies with before he has a chance to win Aaron’s heart.   I love these characters. Hopefully readers will enjoy them too.  In my head, their story keeps going... and going...!

Thank you Tali for having me today!  I appreciate the welcome! 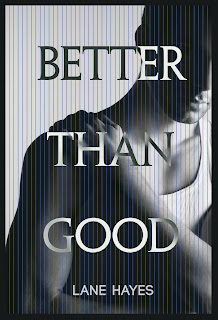 Matt Sullivan understands labels: law student, athlete, heterosexual. He has goals: graduate and begin his career in law. One fateful night, Matt tags along with his gay roommate to a dance club and everything changes. Matt finds himself attracted to the most beautiful man he's ever seen. All labels go flying out the window.

Aaron Mendez doesn't believe in labels, and he’s leery of straight curious men.  He makes it clear that he’ll hide his fabulous light for no one. While Aaron can't deny the attraction between him and Matt, he is reluctant to start anything with someone who is still dealing with what this new label means—especially when that someone has a girlfriend.

Excerpt from Better Than Good by Lane Hayes

By the time I took him back to his place, it was three a.m.  The usually busy streets were virtually empty.  A fine layer of fog from the river painted the low lying shrubs and sidewalks in front of his building.   It looked a little mystic and magical as though the early morning hour still held promise.  I pulled close to the curb, set the car in park and turned toward my companion.  I didn’t want to say goodbye, yet I didn’t know where this thing between us could go.  I felt that familiar wave of frustration.

“Can I walk you up?  I mean it.  I just want to be sure you’re safe.”  It sounded like a lame request, but Aaron seemed pleasantly surprised.

“You are a gentleman, aren’t you?”  His eyes twinkled.   “I won’t say no and I’ll try to keep my hands to myself.  There’s a parking spot up there.  Take it so you don’t get a ticket.”

I parked the car as instructed and met Aaron at the curb.  His smile lit his entire face.  God, he was beautiful.    He took my arm when I reached his side.  I didn’t protest, though the gesture seemed overly familiar.  It just felt amazing to have this beautiful creature at my side looking at me like I was some kind of hero for offering to walk him to his door.

There was a bright lantern light on above the old glass and iron front door.  Aaron couldn’t get the latch to catch, so I took the key from him and gave it a try.

“It sticks sometimes.”  He muttered under his breath.

It opened easily for me.  I was beginning to think my levels of chivalry were being tested.  The thought made me grin when I should have been annoyed.

“You’re my hero!” he whispered loudly.

“Knock it off.  Where is your place?”

“Uh oh, Matty’s getting mad.  Watch out kids.”  Aaron pointed to the elevator off to the right.   The corridor was not as well lit as the front alcove had been.  I was actually glad that I was making sure he was safe.  I was a little nervous myself.  Which must have shown on my face, because Aaron laughed out right as the elevator doors opened.

“Relax, sweetie.  This isn’t the Bates Motel.  It’s just an old building.  Supposedly historic, but really it just means the lighting is poor and the water pressure is worse.  My apartment is cute though.  Come see.  You’re safe.”

I rolled my eyes this time, but gamely followed him.

His apartment was on the fifth floor.  He led me down another long hallway and stopped in front of #5E.

“Home sweet home.” He said with a flourish as he opened his door.  “Come make sure there are no boogie men and then I promise to let you go, Matty.”

Aaron turned on a light and breezed through his small entry into a larger living room.  As I followed him I took in my surroundings.  The apartment was small with an open floor plan.

I could see into his bedroom from the living area and although it was dark, I could see that the bed was neatly made.  Aaron’s entire apartment was immaculate.  And the juxtaposition of his modern tastes and the apartment’s older features, like the high ceilings and a floor heater, made for a homey and comfortable space.  It was nice, and it suited Aaron perfectly.

Aaron threw his keys in the egg shaped bright orange bowl on his small kitchen table and turned around with his arms outstretched.

“It’s really nice.  Suits you.”  I felt a little awkward as I stuffed my hands back in the leather jacket Aaron had returned to me earlier.

“Thanks for walking me up.  That was very gentlemanly of you.  Is that a word?  Whatever, it was sweet.”  His smile was a little shy and his bangs had fallen back into his eyes.  This time I couldn’t help myself.  I reached out to move his hair away from his eyes.  He looked up at me in surprise and my breath caught.  We stared at one another for a second more before our mouths met.

Lane Hayes is a designer by trade, but is first and foremost a lover of the written word.  An avid reader from an early age, Lane has always been drawn to romance novels.  She truly believes there is nothing more inspiring than a well-told love story.  Lane discovered the M/M genre a few years ago and was instantly hooked. She loves to travel and wishes she could do it more often.  Lane lives in Southern California with her amazing husband, three teenage kids and Rex, the coolest yellow lab ever.