Book Giveaway: Shadows in the Night by M.A. Church

I've admired Michelle's writing for years (has it really been that long... yes, it has) and I had the pleasure to be a beta reader for this book. And I do mean pleasure... Shadows in the Night is one hot shifter book!

She's letting me do an ebook giveaway also. Easy to enter. Just answer her question in a comment and be sure to include an email address. My lovely poodle Cate and I will pick a winner about 6 a.m. on Saturday, July 20th. 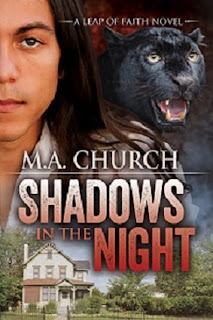 The foes that are unseen are often stronger than those that are seen.
~EDWARD COUNSEL, Maxims

Hey everyone! I’m M.A. Church and I’m here to talk about my latest book called Shadows in the Night from Dreamspinner, which was released July 12th and do a giveaway. To enter, answer this question:

At first, what did Jason call the golden cougar that attacked Chip?

The answer is in this post lol. Make sure to leave an email addy too.

Shadows is a paranormal/shifter novel that focuses on two men raised in different times—Jason, a Native American shifter, and Chip, a modern man with modern ideas.

Time has also brought with it an enemy that harbors a deep-seated hatred for Jason; an enemy who will use whatever means necessary to bring Jason to his knees… including Jason’s own mate.

As Chip is drawing farther and farther into a world he can’t escape from, one thing becomes clear to him. He’s going to have to learn to trust the man he’s coming to care for and take a leap of faith.

Shadows in the Night
~A Leap of Faith Novel

~Blurb:
When Chip Riley's beloved granny passes away, she leaves him all her money, her land, and a house that needs some tender love and care. She never mentioned the legacy comes with a Native American shifter who intends to claim Chip as his mate.

Jason Sky has lived since buffalo roamed the land. When his totem spirit, a black cougar, saves a little girl, he doesn’t realize that generations later, her grandson will become his mate, leaving him to take on a modern man with modern ideas. But that’s the least of his problems.

Garon, another shifter with a long-held hatred for Jason, plots to kidnap Chip and lure Jason to his death. Soon Chip finds himself in an untenable position between a rock and a hard place. A leap of faith may be the only way to save himself and the man he’s learned to love.

~Excerpt:
THE black cougar pulled the blanket to mid-hip. Chip’s chest was still bare, but hey, he had to get his kicks somehow.

Ugh, raw steak. Stereotypical response. See what looks like a wild animal and offer it raw, bloody meat. I prefer mine medium-well, Chip.

He made another loop around the living area. As far as he could tell, things had calmed down outside and the other shifter was gone. The appearance of a new cougar worried him. He knew who all the shifters were in town, and this one, he didn’t recognize. There was something about its scent too—he smelled off. Wrong. He had made eye contact when they fought and there was nothing, no humanity in the other cougar’s eyes. All of his kind retained their morals while in spirit form. Whoever this was had targeted Chip, and that was a mistake. Messing with a shifter’s mate not only could result in death, but usually did. His kind tended to be… possessive.

He glanced back at Chip. His human was snoring. All the excitement must have worn him out.

And what the hell is up with the “boy” nickname all of a sudden? Do I look like a boy? We’ll see who the “boy” is when I get your ass in bed and you’re under me screaming my name. Frankly, I don’t think I can afford to wait much longer, with the appearance of that other shifter. Of course, you need to know whose name to yell. First thing tomorrow, I plan to remedy that, thanks to the Other. Just wish it didn’t have to be done like this.

He’d taken to calling the new shifter Other simply because he didn’t know who he was. Hours passed, and the night sky lightened as daybreak approached. He decided it was safe for him to leave. There had been no sign of the new shifter for hours.

Should I wake him? Ah well, where’s the fun in that? Time to make a point, I think. One that he can’t ignore. Might as well, because come tomorrow, he’s going to have to deal with the fact things aren’t what they seem around here.

Author bio:
M.A. Church
M.A. Church lives in the southern United States and spent many years in the elementary education sector. She is married to her high school sweetheart and they have two children. Her hobbies are gardening, walking, attending flea markets, watching professional football, racing, and spending time with her family on the lake.