Petal the baby basilisk first reared her little head in the final chapters of Thick as Thieves, whereupon she won Vorgell’s heart completely and that of many readers as well. In a moment of sheer whimsy, I commissioned some coffee mugs featuring Petal and I just love them.

Take a look. The mug was made by Chibisilverwings. Adorable, right? 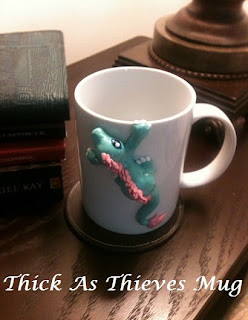 All at once the egg split and a hideous little head popped out. The basilisk’s beady, slit eyes fixed on Vorgell. He recognized that gaze. The eye had looked quite a bit larger as it stared at him from the green jewel of Madd’s collar, but it was the same. He grinned a greeting and watched the slimy thing struggle to free a pink, clawed foot. He could not say for sure just what a basilisk was, save that it had very long toes and what looked like a beak on its snout. Some sort of wet, rosy feathers plastered its skull, but the rest as it emerged appeared to be soft, scaly, and green, not unlike a lizard. When it freed the last of four little legs, it tumbled, tiny tail and all, into Vorgell’s waiting hand, where it quivered in the cup of his palm.

“Well, look at you,” he said, putting aside the now vacant egg and its prison of rock. He thought better of touching the poor newly hatched creature, not knowing if that would be wise, and simply cradled it against his body where it would find warmth. Now that it was free of the egg, he could see the rosy feathers continued from its head down its back and it had a cute little tuft at the end of its tail. It didn’t look quite so ugly now.

I’m keeping one of the mugs for myself and giving the others away. So yes, this blog post is a giveaway for one limited edition Petal mug!

~ To enter the drawing, leave a comment and tell me why you think a basilisk would make a good pet. Be sure to include your email address so I can contact the winner.

~ You have until midnight on Sunday, July 28th to leave a comment and I’ll announce the winner on Monday the 29th.

~ I will ship anywhere in the world, but the winner will need to give me an address that will accept a postal package.