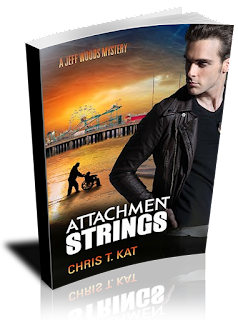 Today I'm sitting down to talk with one of my favorite authors, Chris T. Kat. She writes amazing, hot M/M romances. Her new release, Attachment Strings, veers into a genre I love almost as much as fantasy, the detective novel. Plus it's set in a place I can practically see from my house!

1. Writing is a solitary, often frustrating, and woefully underpaid profession. That said, a lot of people want to do it, so there must be an upside other than the obvious, which is that being a writer makes one sexy. So why do you write?

It does make a writer sexy? Oh, well that explains my husband's interest in— Um, where was I? Oh, right!

I've always had my head full with stories and wrote them down as a kid and teenager. For whatever reason I stopped writing for a long time. I was content with reading, doing sports, crafting and living for my job. After both kids were born I was sick for a few months, discovered the world of fan fiction and suddenly the writing bug bit me. I wanted to read a certain kind of story in my fandom and since I couldn't find it, decided to write my own. That was in 2008. I haven't stopped writing since and I don't think I ever will.

There are so many stories waiting to be told and I enjoy creating my own worlds, to see where my characters will lead me, what discoveries they will make on their journeys to happiness and true love.

For me writing is a way of escapism, a place where I can do whatever, live a life I'll never have in real life and just lose myself. Even though writing is sometimes very hard work, it's the one thing that always relaxes me. 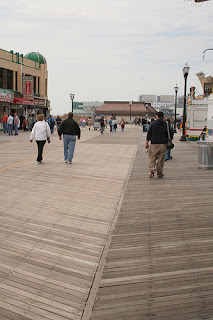 2. Attachment Strings is a M/M detective story. Where is this story set and how did you tackle the world building? I’m asking this because the cover sure looks like the Jersey shore to me and the blurb doesn’t say.

You're correct! The story is set in Atlantic City. The shore and amusement park you see in the background is the Steel Pier Amusement Park, located at Atlantic City's Boardwalk.

3. How much of your personality and life experiences are in your writing?

There's quite a lot of life experiences in my writing. I'm a special ed teacher, so when my characters have a disability I not only have book knowledge but I've also worked with children and young adults with those disabilities. I've gotten to know children when they were still healthy, could run and talk but due to a progressing disability they were bound to a wheelchair and couldn't talk properly any more two years later. I'll never forget the one time when a severely disabled child died during the school morning.

How much of my personality is in my writing? Hmm, that depends on the book probably. I try not to insert myself in my books but some obvious character traits are still in them. For example the teasing way some of my characters have when they talk to each other, that's how my husband and I talk to each other. Well, and then there's my love of animals, which is why in most of my books animals play a prominent role.

4. If we could see your writing space, what would we see?

You really don't want to see my writing space because it's rather, hm, how should I phrase it? Well, it's chaotic, to be honest. I have a small desk in a corner of the living room, so there's stuff piled up everywhere. I absolutely hate when someone tries to organize my desk because I'll never find anything again! My desk might look like a mess but I know exactly where everything is. (Yeah, that's the kids excuse for their messed up bedrooms too...) 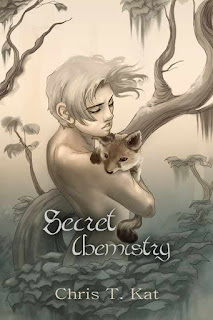 5. I’ve noticed many of your books have a special connection between humans and animals, whether as shifters (Secret Chemistry; A Purrfect Match), pets (Seizing It; Too Good to be True), or feral animals (Caveman and the Devil). So… do you love animals?

Yes! I do, no doubt about it. Currently we have two guinea pigs, named Sky and Sam. We plan on getting a dog but only when we can make sure that we don't need to leave it for six to eight hours.

When I was a kid my mother never wanted pets but she allowed me to go riding. I did that for a while but then money got tight and I had to cancel them. My mother's second husband got me guinea pigs without my mother's permission later and I was very happy about that.

I always get along well with animals, especially those who usually seem to be restless. They always calm down around me and I just love petting them, talking to them or taking them for a walk. When I met my husband at 17 his family had a Bernese Mountain dog—this dog quickly became mine. I loved her dearly! 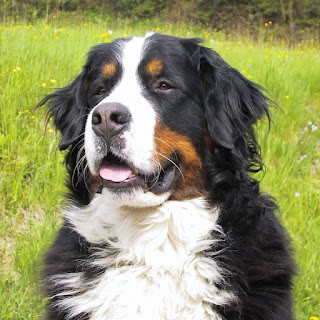 Even though she was such a big dog, she was a real scaredy cat. Any unknown noises or even a little mouse crossing our path during a walk would have her hiding behind my legs. But there was one incident in which she showed her protective instinct. I was out with her for a walk in the evening (in a forest) and a man started stalking me. I began to quicken my pace and the man did the same. The dog was unleashed but she started circling me. Then suddenly she ran back toward the man and barked (this is one of the dogs that never barks!). She walked further up to him, barking and the man quickly veered off. The dog came back to me and stayed close to my side until we were back home. She stayed so close I almost tripped over her! At home I sat down on the sofa, told my then-boyfriend what happened, and the dog climbed into my lap and didn't move for an hour. I was so grateful for her intervention!

6. Want to tell us about any projects you have in the works? Or any releases coming soon?

What author doesn't want to talk about their projects? ;-)

I'm revising a shape-shifter story at the moment and when that's finished I want to go back to the second Jeff Woods Mystery, titled Sacrifices. I've already written two third of the story, so this one should be finished this summer. After that I'll probably go back to a story I started a year ago (it's about an angel and his human mate).

7. Which of your characters most resembles you?

I can't answer this question with just one character because it's a mix between Riley from Silver Lining and Andrew from A Purrfect Match.

Riley because he's compassionate and doesn't leave Scott when things get rough. He stays and tries to find a way to reconcile with Scott. I'm much the same—I don't give up on other people easily. I always find something positive and will be loyal (within reason, of course).

Andrew, because he tries to do what is best for Tony, his son, even if it might not be the best for himself. Jim's shape-shifter secret doesn't faze him and when he loves someone, he does it whole-heartedly. What can I say? Sounds like me. :P

Chris T. Kat lives in the middle of Europe, where she shares a house with her husband of many years and their two children. She stumbled upon the M/M genre by luck and was swiftly drawn into it. She divides her time between work, her family—which includes chasing after escaping horses and lugging around huge instruments such as a harp—and writing. She enjoys a variety of genres, such as mystery/suspense, paranormal, and romance. If there’s any spare time, she happily reads for hours, listens to audiobooks, or does cross stitch.

Visit Chris's  blog at http://christikat.blogspot.com/ or add her on Twitter at http://twitter.com/christi_kat.