Today I'm welcoming back my good friend and awesome writer M.A. Church, who's here to talk about her newest release, The Yellow Rope. This short novella is just the thing to read out on the screen porch on a weekend evening... something I actually did. So yes, it goes great with iced tea or lemonade!

Okay, lol, so I did a few of my own interview questions that focused more on me as a person than me as a writer. Hope ya enjoy!

~When do you do your best writing… morning, afternoon, evening, night?
Well, I’m probably the freshest in the mornings, but I write at all times of the day. If the hubby is working nights, then I’m working. If he’s on days, then I’m writing during the day. What it comes down to is this: when he’s off and awake, lol, I’m not writing. That’s our time together. It’s what we’ve found that works for us… to keep our marriage intact. Otherwise, I’d be on the computer while he’s in another room watching TV.

~ Who’s your favorite horror villain and why?
Huh. Don’t know if Riddick falls in that category or not, but he’s my favorite. Why? Well good God, just look at the man, lol. ;) And that voice! Maybe it’s that dark edge to his voice that gets me, lol. Aw hell, and that body.
I’m not really a horror fan, to be honest. They tend to give me nightmares. I scare easily enough without purposely watching something I *know* is going to freak me out, lol.

~If you could have dinner with one person, dead or alive who would it be and why?
Oh wow, many people come to mind. I’m hoping I get to have time with some of my fellow writers at GRL this year. There are some fans, too, I’d like to meet. Then there are a couple of reviewers I’d like to be able to put a face to. *laugh* I mean that in a nice way!
But who would I *really* like to have dinner with? As sappy as this is going to sound… my Mom. She passed away three years ago. I’d love to be able to sit down and have a chance to catch her up on things she’s missed with me and the kids.

~If you could pick one band to play the background music to a love scene in your book, whom would you choose and what song would they play?
Chicago – Hard habit to break. It’s a sad song, but I love it. There’s so much truth in that song.

~What do you do to relax?
*snort* Relax? What’s that???
Okay seriously, I like to sit on the back porch and enjoy the great outdoors. We live by a pond and there’s wildlife here… ducks, geese, rabbits, squirrels and so on. Even if it’s for ten minutes, I feel refreshed. And some of my best idea’s come while I’m sitting out there looking at the water, lol.

Blurb:
A cranky submissive...
Luke Walker is tired. He spends long hours between his job as a teacher assistant at an elementary school and helping out his family at their restaurant. Coupled with the fact that his degree is going to waste, he’s discouraged and fatigued by too much work and endless southern heat, and not enough time spent with his live-in partner.
An understanding Dom...
Gage Holt has been on both sides of the fence. He believes that in order to be a good Dom, one has to understand being a sub. Unfortunately, he’s had some bad experiences in pursuit of that knowledge, and suffered a great deal. But that’s in the past now.
A long weekend...
Three little days... Gage is determined to see that his man gets what he needs in every way he can give it to him. Anything to remove the dark circles from beneath his beautiful eyes. For the next seventy-two hours, he’s going to pamper his boy—in his way. He’ll fight a bull that hates him, battle with a crusty old woman at a gift shop who snubs him, and deal with the never-ending lack of money just to bring the shine back to Luke’s eyes.
Luke will relax and have some fun, even if Gage has to tie him to whatever flat surface happens to be handy. 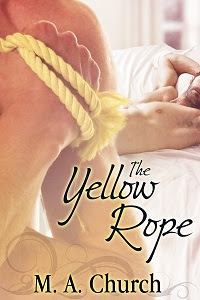 Excerpt:
“I’m going to untie you for a little while so your wrists don’t bruise.”

“Indeed you do. Touch your cock without permission and I’ll tie you to the bed and really warm that ass up.” Gage’s lips twitched. Luke knew him all too well. “I want you to go take a shower and clean up. I’ll be checking, too, so behave.”

“You’re not going to join me?”

“No, I have something to do downstairs.”

“Damn.” Luke moaned into a pillow.

Gage slapped his ass again. “No complaining out of you, either.”

“I’m not complaining!” Luke’s smothered laugh had Gage grinning.
“Just wondering if I’m going to be able to sit down tomorrow.”

“Possibly.” Gage untied Luke and helped him up. “But I wouldn’t bet on anything at this point, I’ve been too long without you. Now, go shower, babe. The longer you keep me waiting…”

“I’m going, I’m going.” Luke’s cheeky grin followed him out of the room.

Once Luke was behind closed doors, Gage went to the guest bath, wet a washcloth, and cleaned his body. Hurrying back to their bedroom, he checked on Luke. Seeing Luke bite his lip while his hands moved quickly and efficiently over his body, he returned to the bedroom and hunted up a pair of boxers. A quick trip downstairs to check on things and he was ready for the next adventure. Gage was back upstairs when Luke came out of the shower.

Gage followed Luke back down. While Gage warmed up the spaghetti, Luke fixed the garlic bread and salads. Gage was happy to see Luke looking more relaxed. Gage fixed both of them a plate.

Luke picked up his plate, a big grin spreading over his face. “Do you really have to ask?”

“Den, it is.” For some reason, Luke hated sitting at the kitchen table to eat. There were times he wondered if Luke’s mom had made Luke sit at the table until he’d finished his vegetables. God knows, the man didn’t like anything green…outside of salad. That was just one of his odd little quirks Gage had to get used to. Gage sat next to Luke on the couch. Luke curled his legs under him and snagged the remote, turning on the TV.
Luke let out a lusty moan. “I swear, you make the best spaghetti I’ve ever tasted.”

Luke found a reality show he liked and set the remote down, smirking. “Ah, I don’t think so. Remember the fried chicken deal? The outside was burnt to a crisp and the inside was raw. So it isn’t my love for you that makes me say this is good.”

Gage scowled at Luke. Stupid chicken was going to haunt him for the rest of his life it looked like. “You’re never gonna forget that damn chicken, are you?”

“Nope.” Luke bit into his garlic bread and winked at Gage.