I like quirky people and quirky things. Life is too short not to be interesting and some people and places are so darn interesting they become cultural icons. Take for example the Purple House. You know right away a place is special when it has a name everyone recognizes, maybe not everyone but definitely everyone on the south side of Milwaukee. How could you miss it?

The house occupied the corner of W. Howard Ave. and S. 43rd Street. I lived in the area and drove by it all the time when I went to college at Alverno, which was just down the street. The house wasn't always painted purple, which is why I never noticed it until one day in 1993 I drove by and saw this: 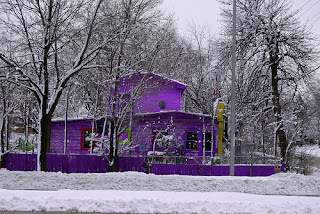 Well...that was different! I rather liked it for the high quirk factor, but it wasn't exactly something most people would want on their street. Because it wasn't on my street, I simply smiled as I drove by.

When I lucked into what became one of my favorite jobs, working for a Milwaukee County supervisor whose district just happened to include the Purple House, I learned quite a lot about the place and its owner. The owner had gotten a job with the city of Milwaukee and needed to live in the city. He was a bit of a free spirit and didn't keep up the property quite as his neighbors liked and they must have complained because he started getting fines for not having the place properly painted. So he painted it. He painted it purple.

Oh yeah, well how do you like THIS! I love that story. 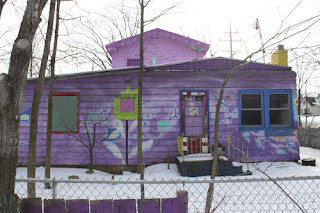 My boss, the county supervisor, got along with the owner just fine and told me the story of the man's ongoing war with the city. He just didn't want to be told what to do. I could relate to that. I could also relate to the neighbors being unhappy. I eventually met him a time or two while delivering house to house notices about public sewer and water installation in the area. I always asked if the constituent had any questions for the supervisor about county programs and the like. He never did, but we had some interesting chats about development in the area and the decline of the parks. The house was near a park.

Two years ago when I was in Milwaukee visiting Mom, I learned that the Purple House was condemned and torn down. I was sad to learn the owner had died. I was even sadder to drive by the corner and see an empty lot. The house had been interesting. It was something special, a piece of pure Americana and Milwaukee up-yours spirit that will never be replaced. I mean, where else would anyone create a Christmas card like this? 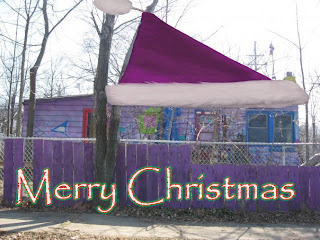 I'm glad I got to see the Purple House, and understand it. It helped me understand that some of the best things in life are the things and people that stand out for being different. We try so hard sometimes to have neat, predictable lives. But there's something to be said for not being part of the crowd. I don't remember most of the many thousands of houses I've seen in my life...but I will always remember this one.
Posted by Tali Spencer at 12:58 PM