Character Sketches and an Excerpt: Vorgell

Some of you may recall the artwork that accompanied the blog postings of Thick as Thieves, which will be released by Dreamspinner in a few months. This sketch of a barbarian was the original inspiration for Vorgell, the main character who has a warped encounter with a unicorn horn:

Notice the ferocity? That ferocity grabbed my imagination and I ended up writing about this big, scary warrior who turns out to have a heart of pure gold when it comes to one other man: Madd, a dark-haired, cranky witch.

Well, as a gift to myself, I contacted Demacros, the artist who drew that image, and commissioned some character sketches for Thick as Thieves. What I love about his work is that the men are vigorously drawn and richly detailed. I wanted that for my guys. I'm so happy with what he did I'm sharing them with you!

So here's Vorgell looking all studly with an ax. He uses several weapons in the novel, including a ridiculously fearsome mace, but he would like nothing better than to get his hands on a Scurrian war ax. 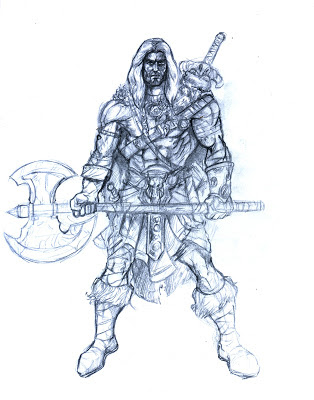 And a close-up of the big guy: 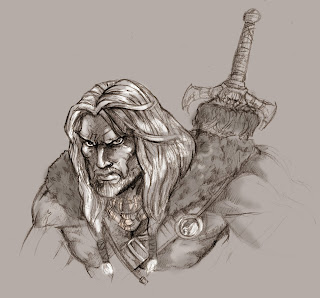 I love that he looks ready to tear someone's head off.

Ready for an excerpt? Here's an expanded (and not yet edited) scene from Thick as Thieves: 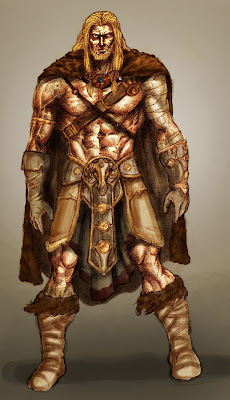 
Coming soon...sketches of Madd. Another excerpt. And news about a basilisk.