It's time again for Wednesday Briefs, a blog hop in which writers post a 500-1000 word flash story—or episode, in my case—based on weekly prompts. At the end of my post, you'll find links to all the other Wednesday Briefers.

I’ve opted to continue my science fiction M/M story “Useful Things” using one of the visual prompts that spoke to me.

If you’d like to start from the beginning, here's the link. [Chapter 1] 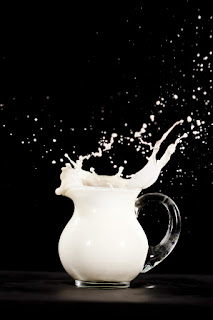 Rasvim curled his arms over his head, distraught at what he’d done. He’d spoken back to an Aeth…had raised his voice.

Don’t call me that!

He was going to die. He’d seen other humans die for less. For refusing an order…for allowing a moment of anger to flash in their eyes, Osvith had ordered them torn to shreds. How had he let his control slip now?

“Listen to me, my special one, and remember my promise.” The low rumble of Majak’s voice didn’t sound like that of a predator intent on harm. “You have nothing to fear. I will not hurt you, whatever you say to me, however you say it. Not in private. Not when we are together like this.”

“Private?” Rasvim gasped the word, amazed his mind could shape a word at all. But he absorbed its meaning. They were alone.

“In front of others, I would be compelled to punish you to protect my own status—but I would not hurt you even then. I will never inflict harm. No death. No feeding. No cruelty. Do you understand?”

It had been easier before. Easier to let Aeth words fall to every side of him while he listened for the ones he must obey, upon which his life depended. He had learned those first. Later, to combat boredom, out of a desperate knowledge he might someday need them to survive, he had learned the language. He had said more to Majak in two weeks than he had said to Osvith in five years. Osvith had used him to mindlessly regurgitate information he had been fed or overheard while left in the company of unwitting visitors. And for sex.

Majak wanted something else. And Majak’s words would not slide past his mind the way Osvith’s had. The words stuck in his brain and clamored to be understood, if he would just let them link into his thoughts. Majak wanted him to understand.

Simply to escape scrutiny, Rasvim nodded that he would listen.

Majak sighed. “My race evolved in violent ways, even the best of us can be vicious. But your poor race was discovered by the worst of our kind, by criminals. When the first of the Var Sareem came to this planet and found evidence of what had been done, we were appalled. That is why I came to your world. What I learned moved me to assume control of the mission to discover the truth about humans.”

Tears rose to Rasvim’s eyes, but he blinked them back. “I don’t know anything. My mother called it spilled milk.” Majak’s sudden look of puzzlement made him realize he’d used human words. He was falling apart…his childhood leaking through the cracks. “You need someone older. It happened before I was born.”

No, he wanted to say, though his tongue wouldn’t fashion the word. Majak was pushing for something he was not ready to hear.

“Rasvim, I am going to ask you to understand something painful. The humans who were removed from your planet and survived, the ones bred for meat, were altered and made more useful for that purpose. So were the ones we now use sexually. Criminal scientists altered the brains of the offspring even more than their parents, made them obedient, only marginally intelligent, and incapable of speech.”

“I gave him language. I had a neural speech component created by my scientists and placed into his brain.”

Bright, life-loving Enir had been speechless? Rasvim drew a deep breath. Outside, the solar wall had shifted, keeping dawn from flooding the hut with light.

“Humans in Aeth space are herd animals, suggestible, incapable of critical thinking. Even Enir.” Majak paused, then said, “When a salvage crew found the corpses of several thousand original humans aboard a derelict processing ship, our scientists uncovered evidence about how humans had been altered. They believe humans—those here, like you—might be as intelligent as the Aeth.”

“You—you believe that?” This time he met Majak’s eyes, and received a smile in return.

Rasvim nodded. He remembered Majak’s words, and how they had made him feel. He had been happy Majak knew him to be intelligent. “But why does that matter? If we’re smart, if we’re not…what difference does it make?”

“Because life is commonplace, but truly intelligent—sapient—beings are rare. There are only four species that we know of. The Aeth are one.”

He realized he knew the name of another. Osvith had spat invectives against a hated enemy. “The Slig,” he said, and was pleased when Majak nodded.

“Yes. The Slig are terrifying. We don’t understand them and our few encounters have been deadly. The other species of intelligent beings of which we are aware is bound to an extreme environment and our interactions are complicated.”

“I do not know what humans truly are.” Majak lifted a hand to his hair and gently stroked the ridge Alaksu had created. “I am hoping to find out by learning what you are.” Rasvim could not look away from the alien’s eyes or the passion burning there, seeing it for what it was, naked and intense and focused only on him. “I want you at my side to show me your mind, speak your thoughts…your ideas. I want your opinions to inform mine, open portals through which I may see. What you say, what you show me, will not be new to you, and you may not understand its importance. But it will be new to me, new to the Aeth.”

Majak wanted him to be human.

(Continued in next chapter…)

Thanks for reading. I guess Rasvim now knows at least some of what Majak wants. :) The rest of the Wednesday Briefers have great stories to offer if you click on the links below.