Welcome back to Wednesday Briefs, in which writers post a 1000 word flash story—or episode, in my case—based on the weekly prompts. Even though tomorrow is Valentine’s day and I thought about doing a standalone Valentine’s flash, I’ve opted to continue my science fiction M/M story, “Useful Things.” Majak and Rasvim are on a roll!

The prompt I chose this week is a pic of two people kissing. Both are obviously human. In my story one of the characters is an alien, but who would have a picture of that? This is inspiration, though and…kissing. Yeah. That happens, so we’re good to go.

Want to start at the beginning of Useful Things? [Chapter One]

You’ll find links to the other Wednesday Briefs bloggers at the end of this post. Happy Valentine’s Day! 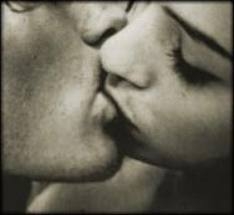 Rasvim shuddered as Majak’s warm breath stirred the fine hairs on the side of his neck, and he silenced a whimper. His erection ached as he thought of Majak using him, but already his body tensed for the assault. He always hated the moment when an Aeth cock invaded his body…hated it as hotly as he craved it. Except this wasn’t the way it was usually done. He was seated on a bed, his legs bent over the edge, and Majak was seated at his side, not looming over him or pushing him down onto his back.

When Majak’s mouth brushed his cheek, the gesture was so delicate, so resonant of restraint Rasvim nearly strangled with need. What would it take to get this alien to fuck him? Frustrated, he turned his head so his lips found Majak’s, mouthing the sensitive skin folds to get at the smooth, moist undersides. He encountered resistance, hesitation, but he renewed his entreaty even more fiercely until Majak emitted his own frustrated growl, grabbing him by the back of his skull and crushing Rasvim’s mouth to his.

Rasvim gave a muffled cry of welcome as Majak’s strong lips pried his open to exchange moisture, heat and breath. Each movement brought discovery. Hot, demanding, pulling desire from his core. He found himself braced by powerful arms, held, mastered…the way it should be. Until Majak ceased his plunder, mouth moving from Rasvim’s parted lips to press hot kisses down the exposed column of his throat.

“I will not use you.” Majak’s voice sounded strained as he murmured against human skin. “I will not do that.”

He quieted as Majak returned, lips gliding atop his, gentler this time, exerting control. More aware of his surroundings now, Rasvim caught sight of the Aeth and groaned. Majak was in full sexual arousal and display, his mating crest lifted and magnificent, dominance striations standing out in striking contrast on the skin of his neck and head. Rasvim knew but for the form-fitting shield skin Majak still wore, he would see those markings trail in sinuous patterns down the Aeth’s shoulders, arms and back.

Rasvim spoke Majak’s name again, lips upon lips, and gasped at the light push of the alien’s tongue. He sucked upon the tip, his own tongue tracing the slippery underside while the raspy upper nudged his lip. He sobbed with pleasure when he felt thick alien fingers curl around his stiff cock.

He arched his back only to discover Majak cradled him tightly to his chest. The deep Aeth ribcage coupled with a strong upper limb to hold him captive and yet it didn’t feel like being imprisoned. It felt tenderer than that. Rasvim could still push his feet against the floor and he did so, lifting his pelvis and pushing his erection into Majak’s waiting hold. Two fingers and one of the Aeth male’s opposable thumbs gripped him while the spongy pad of the second opposable digit lightly caressed his exposed, aching glans and spread his dripping pre-come. With every thrust, the lubrication slicked Majak’s fingers, creating delicious friction from the alien’s firm hand.

He was going to come—he wanted to—and he leaked even more. What Majak was doing felt too good…too much, and he broke down in a whine.

Again Majak faltered, but only for a moment. His lips moved in again, laying claim to Rasvim’s mouth and skin with fierce, bright possession and his fingers tightened around the barrel of Rasvim’s cock, pistoning him. “Use my hand, Jesse. Take it. It’s yours.”

Hearing his name, Rasvim lost his bearings completely. His pelvis bounded toward release and he tumbled over the precipice into the free fall of orgasm. Semen spilled thick and hot into Majak’s waiting fingers, each jerk successively weaker.

“I’m sorry.” The apology barely formed on his lips before Majak kissed them away. More soft, shushing sounds followed.

Still holding him gently, Majak pulled him down onto the bed and Rasvim sagged against the alien’s body, surrendering himself over to the heavy lethargy of exhaustion. The Aeth’s body heat and calm lulled him as he futilely tried to make sense of it all. Nothing was making sense anymore…not even this, that he could lie here after, his mind able to drift while he remained anchored and safe…

Majak waited until Rasvim was sleeping soundly before he eased his body from the bed. What he had just experienced was too shocking for sleep. Nothing in his pleasant interludes with Enir had prepared him for this. Not this heat. Not this raw, consuming desire. He had enjoyed this human too well, had felt pleasure in laying hold of him…the way Rasvim’s mouth had opened to his so hungrily, the delicious taste of hot flesh giving itself to him without resistance, little as he liked the reason. He could no longer deny that he wanted Rasvim with a craving that someday he must sate.

But carefully. He must be careful.

Majak walked to the other bed and stripped from his shield suit, wiping his hand clean of semen but not the memory of how it had felt to hold Rasvim’s ejaculating cock in his hand. He wanted to do it again. He wanted to do more. What stirred in his blood far surpassed a simple demand to satisfy his loins. For that, a pet would do, or a subordinate of his own kind. This…was different.

Voicelessly, he tested Rasvim’s race name again. Jesse. Enir had told him of it. Speaking it had felt intimate, and Rasvim’s response to the name had been powerful. He had touched old roots. He had uncovered at last the deeply hidden creature he wanted to reach and see grow.

Jesse. A human name. A name for everything Majak was trying to do…if only he could hold back from claiming Rasvim the way he so wanted to claim him.

(continue to next chapter….)

Thanks for reading. Hope you enjoyed their first kiss. Here are some links to the other Wednesday Briefers and their stories for some fun Valentine’s reading.