Welcome back to Wednesday and a continuation of my science fiction m/m story, “Useful Things.” I’m cruising the Caribbean this week, so this is a non-Briefs installment I wrote in advance (though I’m keeping the 1000 word limit).

Majak reclined on his bed and watched the two humans. His initial question—whether Rasvim would accept Enir or turn him away—had been answered. Enir curled next to Rasvim and the two appeared to be touching each other in tentative but gentle ways. He sensed no danger to Enir. Their hushed conversation filtered to him through the feed and he listened, enjoying how light his language sounded when spoken with human voices.

He learned nothing new. Rasvim, as usual, said little. It would take more than a few demonstrations of kindness to unlock that wary creature’s secrets. Majak saw Rasvim look toward the bed and smiled. There it was… an unguarded moment. Rasvim’s dark eyes looked different, sharp with intelligence, as he gazed openly at the blank screen of the privacy shield. He had not yet discerned that its opaqueness was one way, and allowed Majak to observe him.

Majak saw no trace of the slave he had taken from Osvith’s compound. This Rasvim was not a passive captive, dulled into servility. The muscles of his face lifted and defined his features more clearly, drew his mouth into a shape that was new and expressive.

Majak’s breath quickened. It was impossible not to respond to Rasvim—his luxuriant crest of black hair and alert dark eyes, elegant nose showing nostrils flared with arousal, and lips slightly parting as he stared at the bed. Majak released his genital shield and allowed his cock to emerge fully from its sheath so that his fingers might stroke it, teasing pleasure while he gazed upon the amazing creature he desired. He regretted when Rasvim looked away and settled behind Enir, intent on finding sleep.

With unabated urgency, Majak filled his mind with images of Rasvim kneeling submissively before the holders with blood rubies sparking against creamy skin. Rosy lips open while Rasvim’s tongue touched Majak’s fingers. His breathing quickened as the images served their purpose and he ejaculated, semen flooding his fingers. He had been abstinent since taking up this post.

He frowned with displeasure at his sticky hand. At least his mind was clear again. Tomorrow he would need the clarity. 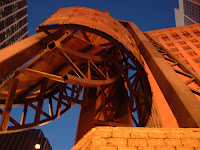 The simulated Aeth noctis bled into another Qattiyan midday. The Prime Quadrant’s solar shields diluted to allow sunlight to filter into the rooms. Majak adjusted the parameters of his shield skin, appreciating the sleek fit. Urhal’s frown deepened.

“The field units are not equipped to welcome and protect a son of the Var Sareem, nor will they be happy when they must host one of these.” Urhal gestured to Rasvim. The human stood near the window, where he was being outfitted by Alaksu and an armorer. Aeth armor fit uneasily upon smaller, differently shaped human frames.

Though he listened intently to Alaksu’s instructions, Rasvim looked confused. Majak considered the scene for a moment before turning his attention back to Urhal.

“The field unit will do as I order. I want him with me.”

“The slave's been adjusting well. Why re-expose him to his native environment?” Urhal grumbled. “What if he reverts?”

“If he reverts, everything I believe about him is mistaken. When is the last time I was mistaken?”

“You were mistaken when you made the decision to come to this wretched rock. Many wish to see you fail. You gave them the opportunity.”

While not a peer, Urhal had long owned the right to criticize his lord. No one would defend Majak more fiercely if the circumstances called for blood and life. “I gave myself the opportunity to succeed. I am giving our species the opportunity to gain allies against our enemy.”

Urhal snorted. “These things? They do not exist in sufficient numbers to arm as soldiers. They are too weak to serve in the mines. They don’t even breed sufficiently quickly to be useful as food for the troops—they’re elite meat. They cannot learn our technology. Their greatest asset is that they are well made to be fucked, and fucked often. They even learn to enjoy it. Bed partners, my prince, are the best use for humans.”

A point Majak saw no need to argue. Was he not lusting after a human himself? He had not thought to do so when he had first encountered the species. His sympathy had been for their plight, and closer examination had piqued his curiosity.

He walked across the room to where Alaksu fussed with the wrist tabs on Rasvim’s fitted garment. Blue-green metal glinted where she had replaced the usual weaponry with tracking and communications gauntlets. Seeing a human standing before him wearing an Aeth shield skin was disconcerting. Except for his alien skin and eyes—clear of cosmetics for the first time—and the slightness of his build, Rasvim looked like a young cadet still in training.

Majak adjusted the fit of the collar and gazed down into Rasvim’s lifted eyes. Questions resided there, waiting in brown depths so dark they beckoned him inside. Something waited there, something important, if only he could reach it.

“Are you ready?” he asked the waiting human. “Today you will accompany me to the field. We are going to see Kansas.”

Thanks for reading! I'll be back tomorrow, so will answer any comments for the last couple installments then. :D

This is where I would usually include links to the other Briefers, but I was sailing the seas when that list was released. The link below should take you to someone who does have the list.