M.A. Church: Into the Darkness

You all know how much I love dark, delicious bites of fiction.  Well, M.A. Church is releasing another in her series of dark, sexy stories and she’s agreed to give me a sneak preview of her newest tale, Into the Darkness. 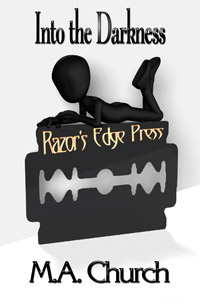 Tag: Jordan and Allen are out for fun, but they're playing a dangerous game with an ancient predator...

Blurb: Pounding music and writhing bodies fill the dance floor at Night Moves. Brothers Jordan and Allen share everything, and are part of a very small, very elite group of friends. What do they have in common? More money, power, and connections than most people can even fathom. These young men consider themselves above the law. Spoilt, powerful, and totally amoral, they use men without a thought for the consequences of their actions. Tonight the brothers have their sights set on a sexy redhead -- they're determined to have him in their bed!

Chaus is an ancient vampire as cold as his deadly kiss. Driven by a taste for kink, he's searched for centuries to find someone as debauched and sinful as he is, only to be continuously disappointed by humans and nonhumans alike. One desire drives him: a pet to call his mate that he can torture and pleasure with his lethal desires. His hunt has brought him to Night Moves, and he's on the prowl.
Jordan and Allen are out for fun, and they place a bet on a deadly game. But they're playing with a predator -- and a dark, hidden secret that the brothers possess will be the catalyst that brings Fate down on them. The Bad Boys Club has once again picked the wrong target to play with.

Email ThisBlogThis!Share to TwitterShare to FacebookShare to Pinterest
Labels: excerpt, Into the Darkness, M.A. Church