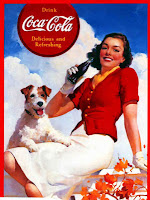 While I am enjoying a wintry visit to family, my good friend M.A. Church has agreed to blogsit and interview her characters, Brian and Daroshi, from her new book Nighttime Wishes. So please welcome her, and enjoy the guys!

Bryan: I think it was when he took me back to earth to get some of my things. We didn’t have a lot of time with the jump coming up. He could’ve blown me off with the excuse of lack of time, but he didn’t. I guess that’s when it became clear he really wanted me to be happy, and would do his best to make me happy. Now, as far as being happy as his mate, that’s a little harder to answer.

Daroshi: *tentacles jerking on his back* What does that mean? You are not happy? Bryan, I want you to be happy!

Bryan: I’m not saying I’m unhappy, big guy. Calm down. All I’m saying is things are still too new between us. I have no idea what my life will be like once we get to your world, how I’ll be treated, what I’ll do every day. I’m still settling in, you know what I mean? Things are still… I’m adjusting.

Daroshi: You will be happy as my mate; I will make sure of it.

Question: Does you still bake? If so, what do the aliens think of it? *insert mental picture of alien eating a chocolate chip cookie*

Bryan: I’m gonna kill M very slowly! *Laugh* so much for my secret. So far, I haven’t had much of a chance to do any baking. I’m hoping once we get to their home world, Daroshi can make something like an oven for me. He should be able to do that, right? *eyes Daroshi* Hey, what can I say, I like to bake.

Daroshi: What is this bake? What is a chocolate chip cookie? What I saw that night at your house wasn’t very good looking, I have to say.

Bryan: Um, guys, if you remember I had someone trying to—

Bryan: Ooops. *Blush* Sorry about that. Don’t want to give away the end of the book.

Question: If there was one thing you could go back and get on earth what would it be?

Bryan: Right now, the first thing that comes to mind is my damn gun. Seriously, I need it. But other than that, I guess I’d like to have my new mattress. You know, the one I just bought and had to leave behind.

Daroshi: *Grumbles* I made you one.

Bryan: Still not as nice as the one I left behind.

Question: So, Bryan's mate is an ALIEN!!! Scales, tentacles, along with human features… I would like to know what he thinks is Daroshi's sexiest feature.

M: *Snicker* Bet I know the answer to that one.

Bryan: Shut you, you. *Clears throat* Okay, well. I’d have to say the tentacles. I’m not going into why I like them so much. I’ll just say they are… useful. Outside of that, I’d say his eyes. They’re really cool.

Question: I want to know what the first thought Bryan had when he first saw the aliens.

Bryan: Oh, that’s easy: “Oh shit, I’m fucked.” I mean, the first one I saw was Ziang, and it was night too. Scared the hell out of me, to be honest. This dude was huge, and mean-looking. Yeah, I freely admit it, I was scared shitless.

Daroshi: Oh come on, we aren’t that scary.

Bryan: Keep telling yourself that. I know M tried to make ya’ll intimidating, without being horrifying. Still, you guys are really big close up.

M: *Grin* And I do believe that’s something you liked, right, Bryan?

Daroshi: He likes that I can pick him up, in case anyone was curious. And he’s not a little guy, either.

Daroshi: What? “Looks around* What did I do now???

The first book is called Nighttime Wishes. https://www.allromanceebooks.com/product-nighttimewishes-790160-143.html The second book is Nighttime Dreams, and there is one more book in the series coming soon: Nighttime Promises. 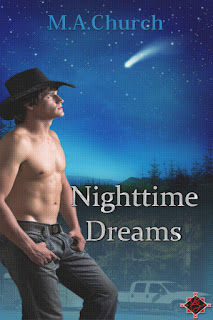 Blurb:
Bryan, a simple country sheriff, is ready to shoot someone and hide the body. One particular homophobic FBI agent is really pressing his buttons. Along with that he finds himself in the middle of an FBI investigation revolving around a recent UFO crash landing, is questioned about a missing friend targeted by the FBI, and makes first contact with the very alien the FBI is hunting.

Daroshi, a Ma’Rairan warrior, has fulfilled his obligation to his species, and is ready to mate. As second in command he monitored the rescue of his captain who crashed on Earth while collecting his mate, and witnessed the confrontation between a country sheriff name Bryan and his captain. Impressed by how courageously the brawny human male handled meeting a fully armed alien warrior, Daroshi asks permission to take Bryan as a mate.

Neither male is ready for the problems that come with Daroshi’s decision, nor the passion that explodes between them.

Excerpt:
Ziang and Daroshi transported down into Bryan’s backyard. The night was pitch black, the moon hid behind layers of fluffy clouds. Branches in the trees danced soothingly to gentle breezes. An abundance of shrubs moved silently in the quietly swirling wind. Bryan’s small house was set away from the main road and deep in the woods, alone and isolated. Much like the owner.

“Interesting set-up he has.” Daroshi looked around. “Bit cut off, though.”

“That’s good for us. The last thing we need is more attention, and that FBI agent showing up,” Ziang said. “I want this to go clean and fast.”

“True. Of course, if he did show up, we could give him to Haya.”

“I don’t like the human, but I wouldn’t do that to my worst enemy.” Ziang tapped the communications device on his wrist, loading in their landing coordinates. “Since Bryan is a law enforcement officer, set your weapon to low stun, just in case.”

“Ziang, I don’t want to stun him if it can be avoided.”

“Neither do I, but Shawn’s words keep replaying in my head. Most bullets won’t hurt us, but then, Bryan isn’t most humans. I’m sure he has other weapons in his house that could be dangerous.”

“But their weapons are so primitive.”

“That may be, but primitive can wound just as easily as advanced. Set your stunner to low, and use only if needed.”

“I’ll distract him, and you unarm him, if necessary. I know you don’t want me touching him.”

“No more than you’d want my hands on Shawn.”

“Should we activate our invisibility?”

“No, it’s dark enough. If we just appear, we may scare him even more.”

They crept around the house, moving carefully though the darkness. Both activated their face shields for night vision. They blended with the night, silent hunters that became one with the darkness and shadows; predators with a mission. The prey was inside, unaware of what was closing in on him. Ziang opened his wrist weapon and pinpointed Bryan in the house by his body heat. He motioned for Daroshi to follow him to the back of the house. They’d enter through the back door in the kitchen. As they passed the open window, Daroshi came to a stop when he heard Bryan’s comment about his hand and a big red dildo.

His body came alive and his tentacles jerked against his back. A low growl of desire slipped out. Ziang immediately sliced his hand through the air, calling for silence. Daroshi couldn’t help himself; the very image of Bryan working a dildo up his ass inflamed him and sent his desire for the human spinning out of control. Daroshi respected this human’s bravery and his dedication to an often thankless job, but now there was more. He could scent Bryan’s arousal. The scent was unlike anything he’d ever smelled, sharp and musky. From the depths of his soul the word mine exploded in his head. He wanted Bryan with a passion he hadn’t felt, ever, and he’d do whatever it took to ease him into his new life.

In his excitement, he made a rookie mistake. As he passed the window, he didn’t bend down low enough to conceal himself.
* * * *
Bryan sat at the table, waiting for the cookies to bake, when he heard a low growl, quickly smothered, outside the window. He’d heard something very similar, and not long ago. It wasn’t a sound he’d ever forget. Every hair on his body stood up, adrenaline spiked, and his heart kicked into high gear. A cold flush spread though his body. From the corner of his eye, he caught the blurry shape of something moving under the window. He glanced at the back door and his stomach cramped. It was unlocked.
There was no way he could lock it before the intruder busted through. And if he was right, and what was out there was what he thought it was, a wood door wasn’t going to stop it. Plus, the window was open.

Calmly he stood and reached for the drawer by the stove. His off-duty weapon was stored there. He grabbed the taser, too. Why was the alien back and sneaking around his house? If it was the alien that Shawn left with, why not just show itself? He’d seen it before, so why act like this? He’d seen lights in the nighttime sky shortly after Shawn left with his alien, but he assumed they were monitoring the situation, to make sure all was okay before they left. It never crossed his mind they were watching him.
Why would they be watching him? Another unsettling thought hit Bryan. Had something bad happened to Shawn? If that was Shawn’s alien, and he wasn’t sure it was, had it returned to let him know? But that was silly; he couldn’t communicate with it like Shawn could.

What the hell was going on?

The handle on the back door turned slowly. Bryan tried to slow his breathing; he was sucking air and that wasn’t good. The door eased opened, an inch at a time. He held his ground as the door opened and he found himself staring at a seven and half foot alien… again.

Bio:
M.A. Church lives in the southern United States and spent many years in the elementary education sector. She is married to her high school sweetheart and they have two children. Her hobbies are gardening, walking, attending flea markets, watching professional football, racing, and spending time with her family on the lake.