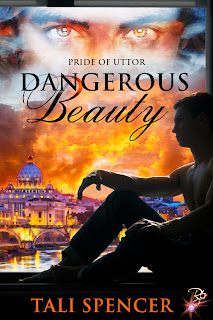 I don't have a release date yet, but here's the cover art for my upcoming Pride of Uttor novel, Dangerous Beauty. The book is a m/m romance and a sequel to Captive Heart.  Resplendence will be the publisher.

Dangerous Beauty tells the tale of Julissa's brother, Endre, and continues the story of the captured Sebboyan royal family.


Once the Kordeun family ruled Sebboy… now they are imperial captives of the Uttoran Emperor. Devout and studious, Endre Kordeun loves his family and will do anything to free them, even if that means pretending he is homosexual so he can pass messages to his father’s shady allies. With his golden good looks and a beautiful male courtesan posing as his lover, Endre finds Uttor’s decadent society more than willing to believe his ruse.

But when a passionate kiss from a dark, gorgeous man unlocks feelings Endre had been hiding even from himself, lies start to unravel. Arshad, prince of Tabar, is Endre’s match in every way… including a shared love for science and celestial mechanics. Going forward with his charade will be dangerous, and not only because he might be discovered. In that event, even his own father would kill him. How much is Endre willing to risk for love?
Posted by Tali Spencer at 2:16 PM