Welcome to this week's Wednesday Briefs and another 1000 words of my serial flash M/M WIP. I'm having fun with it and hope you will, too. For this week's episode, I used one of the visual prompts.

The Aeth had razed scores of human cities; the rest they just let crumble. The remnants of free humanity dwelt in those crumbling cities or huddled in wilderness enclaves, both of which the Aeth now left alone except for incursions by poachers and slavers. Rasvim had spent his childhood in what remained of Wheeling, an inland city far from Aeth colonial posts. After his capture, he’d been taken somewhere else and sold to Osvith, who had run his operation out of the ruins of Baltimore.

Now he stepped out of a transport vehicle and onto a platform in the first unruined city he had ever seen. To every side, dark towers glittered with trails and halos of light. He dared not look down, but kept his eyes on Majak as he walked along a gangway into the maw of an Aeth building. The air smelled faintly acrid, though with hints of musk when an Aeth drew near. Majak gave off his own powerful scent, that spicy trace Rasvim found so intriguing. Ver Majak found reasons to touch him often—on the small of his back to guide him along, at the top of his spine in what felt like an attempt to reassure.

Rasvim was accustomed to being touched by Aeth fingers, having his more delicate skin stroked by wondering Aeth hoof-pads. His usual response was conditioned arousal.

He observed his surroundings as he always did, funneling images, sounds and smells into his body. He would make sense of them later, when he had time to sort through everything. He would assign meaning where he was able and try not to misinterpret the rest.

The corridors became filled with fewer people and more objects: polished displays of art or military objects, alcoves ringed with cushions around tables laden with glittering vessels and strange, bird-like flowers. Living trees grew from the floor. At least there were but two Aeth to greet Majak, Urhal, and Rasvim. Three Aeth and a human. 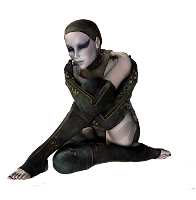 The human did something strange. He, to judge by the bulge in his form-fitted body wear, which barely covered his torso, folded his fabric sheathed arms across his chest and lowered his body to the floor in a graceful sitting posture. Fabric also sheathed his legs and covered his hair, giving him an odd, sexless look.

To the Aeth, Majak said, “I have brought you a new member of the household. This is Rasvim”—he had learned the name during a brief conversation during their journey—“and you will find him already well-trained and quick to learn. He speaks our language fluently and I expect you to train him to full companion status.”

“Companion?” The Aeth who spoke had a darker nose than Majak and smaller eyes. The higher voice marked her as female. Dark striations marked the hide from her neck to where a crimson robe clasped at her throat. “Not comfort?”

“No. I am reserving him for my personal use. Like Enir here.” Majak dropped a hand so he could press long fingers to the seated human’s head, which bowed to the touch. Blue human eyes looked up from beneath painted eyelids to meet Rasvim’s.

Was this what Majak wanted him to become?

“I want Rasvim and Enir both to accompany me to the reception tomorrow.”

“Such an important event! All the prime holders—”

“I understand, Alaksu. I trust Rasvim’s training will not embarrass me. I also trust your preparation of him will please me.” He turned to his captain and the other Aeth, a squat female wearing what looked like a military sash. “Come Urhal, Damqa… I want to go over what we gleaned from this operation.”

Majak walked away, leaving Rasvim with Alaksu and Enir. The human rose as gracefully as he had lowered. He was taller than he had looked, and so slender he looked like a child. Rasvim was taller and broader.

Alaksu raked Rasvim with a critical gaze, then snorted, her flat nostrils flaring. “He’s probably right. You’re almost too crude to be a comfort slave. Pretty, but growing coarse. They failed to neuter you soon enough.”

Rasvim saw no point in volunteering that Osvith had rejected the option because he’d hoped to breed him. He caught a sidelong glance from Enir, but Alaksu commanded his attention again.

“I will see just how well-trained you are. Someone from the den of a criminal is unlikely to have skills sufficient for the house of a son of the Var Sareem. Ver Majak must be attended only by creatures that bring credit to his position. I fail to see the potential.” She huffed again and led the way into a different corridor.

Alaksu gave him to Enir to be bathed. The chamber in which she left them was round and lofty, filled with fragrant steam. The pool at the center was beautiful… round with creamy marble steps leading down into water of a soft, mesmerizing blue-green. Rasvim yearned for the touch of water on his skin. At Osvith’s, he had used only wet cloths and small amounts of medicinal gel. He stripped out of his clothes, which Enir examined disdainfully.

“Old human?” His voice was light and pleasing.

“My master liked the look.”

“You won’t wear that here.”

Rasvim didn’t mind. Naked now, he stepped into the water and sighed happily at the warmth that seeped into his muscles. He had never bathed in warm water, only cold. He looked back to see Enir staring at him.

“You’re beautiful,” the other human said.

“But you are. I see why Majak wants you.” Enir peeled off his leggings and arm wear, then his single piece torso covering. Rasvim studied him openly. “I’ve been neutered, but I think you guessed that.”

“No. Processors. I was being raised as food. The Var Sareem found the operation and shut it down. I was rescued.”