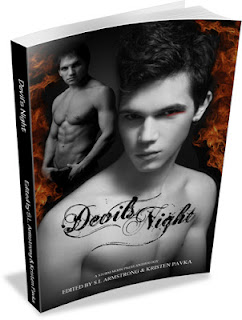 This will go down as the year I went to the devil.

Let's see, of the stories I've written this year (meaning wrote, not published), all but one of the free stories has had supernatural villains. Sorcerer's Knot has a very dark and evil god. “Blood Red” has creepy ghostly horror. Even Thick as Thieves, light-hearted romp that it is, has Madd and Vorgell battling horrific otherworldly fiends commanded by evil wizards.

And the “The Seventh Sacrifice” is all about a demon.

The Devil's Night anthology is available today from Storm Moon Press. [HERE] AND I am conducting a giveaway... with the winner to be drawn tomorrow morning. The giveaway is HERE.

And here's an excerpt where a bit of my sexy dark side comes out to play:

“I want all of you, Spaniard.”

The prickle of warning he’d been fighting all day made him jerk with alarm.  “My name is Beltran—”

“Your name doesn’t matter.  This does.”

He gasped, and a shiver traveled down his spine when he felt Katari’s lips on the nape of his neck.  God, yes!  Wasn’t this what he had come here hoping to find?  Well, maybe not a sorcerous cock-ring, but the pure, hot celebration of cock mastering cock.  The man was teasing his cock again, prodding his balls, sending pleasure ratcheting through him like beats on some infernal drum.  He threw his head back, hair spilling over Katari’s shoulder, as his knees threatened to buckle.  Overhead, the moon shone white and shimmering and three-quarters gone.

Katari rubbed a thumb over his cock head, swiping at his leaking pre-come and smearing it over the sensitive glans.  He nibbled the rim of Beltran’s ear and teased the lobe with the tip of his tongue, causing Beltran to try to wriggle out of his grasp.  “Do you know what an amaru is, Spaniard?”

“No.”  Something was happening to Beltran, something he feared but didn’t want to stop.  Don’t let this end, please don’t let it end... I need this too much.  Those dark fingers handled him expertly, caressing his rigid dick with firm control to the rhythm of silken words.

“The amaru are great serpents, children of the earth itself.  The gods could not order them, the Incas worshipped their powers.”

“Snakes?”  Though he managed the word, he was barely able to think.  Snakes?  With every stroke of those strong fingers, Katari was finding new ways to own him.  He bent forward, intent on watching.  What he saw made him moan.  His cock was now wrapped with a serpentine band of gold, twining around it from root to engorged tip.  A ring of the same shining metal encircled the base of his glans, which protruded, dripping, from the cage.

“Yes.  Sacred, powerful snakes.”  Katari licked the side of Beltran’s neck.  “Do you like my handiwork?  Your legs are getting weak, Spaniard.  Kneel.  I have a snake for you to worship.”

Oh, and here's a cool picture of an amaru... thanks to the beautiful art of Genzoman.  He's from Chile, so knows his llama-serpent demons! 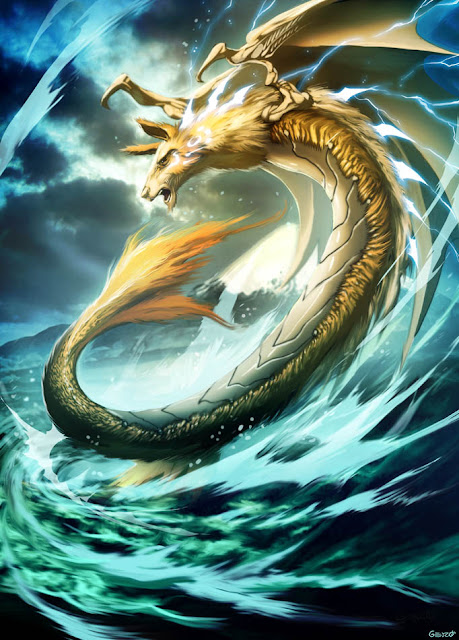