Gertie the Duck and the Tobermory Cat

This post is part of the Holloween Blog Hop and any reader who wishes to comment can win a free ebook copy of one of the books on my sidebar. I'll be drawing three winners, so just leave your email in the comment so I can contact you if you win. If you comment on any of my posts during the blog hop, yes... you get more chances to win. :D

Now, what or who is the Tobermory Cat and what does that have to do with Gertie the Duck?

Well, yesterday I read about what happened to this writer, Debi Gliori, and the bullying and trolling she suffered because she wrote a book about the Tobermory Cat. It just floored me. I really suggest every writer read Debi's blog post. I suggest every reader who has ever thought another writer ripped off their favorite author's "idea" read it also. Writing, my friends, is not a profession for the easily intimidated. 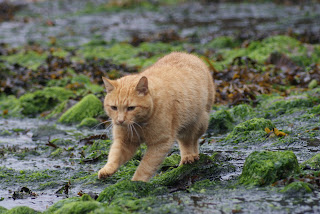 I grew up in a city filled with stories. Milwaukee has its share, and one is the story of Gertie the Duck.

In April 1945, near the end of World War II, a young boy pointed out a mallard duck had built her nest atop one of the wood pilings under the Wisconsin Avenue bridge in downtown Milwaukee. Wisconsin Avenue is one of the busiest streets in the city and at that time was lined with stores and offices. Soon, shoppers and passersby were thronging on the bridge to look at the nesting duck. A newspaper reporter, Gordon MacQuarrie, began writing daily reports about the duck, soon named Gertie, and the city adopted her as its own. Gimbels department store even provided a window for Gertie and her six ducklings to live in (complete with nurses to tend to their conditions) when fire destroyed nearby pilings and threatened them. Two million people stopped by to see the famous duck and her family. The ducks were later relocated to one of the city's park lagoons, where Gertie continued to draw visitors for years. 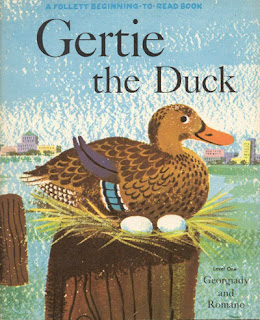 The main point of Gertie's story is that no one later prevented--or even tried to prevent--children's book writers Nicholas Georgiady and Louis Romano from writing the story of Gertie the Duck in 1949. Or any of the several other books released over the next decades. Reporter MacQuarrie or the newspaper, the Milwaukee Journal, could have claimed the story was theirs... but they didn't. Gimbels Department Stores could have claimed they "made" Gertie famous through their store window. Gimbels simply gave the authors permission to use their store name in the book. The people involved with Gertie realized that Gertie wasn't a product. Gertie was an idea, a part of the culture and tradition that is Milwaukee. Gertie the duck is long gone, but Gertie the Milwaukee Duck lives on in statues, books and fond memories. 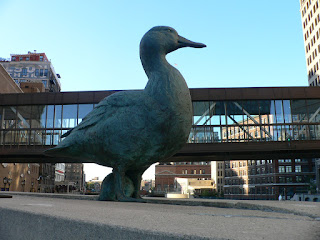 The artist in Tobermory who believes he owns the idea of the Tobermory cat because he started a Facebook page about the cat is mistaken about the nature of copyright and intellectual property. I know what it's like to have intellectual property stolen. I blogged about my books being stolen: that thief stole my stories word for word and pretended she had written them. Read Gliori's blog, and read what the artist in Tobermory is doing, and tell me that's the same thing. It's not. 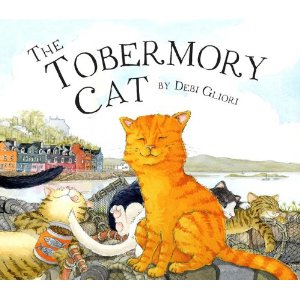 The brouhaha surrounding the Tobermory cat is ugly. That ugliness is now part of the story of the Tobermory cat. And that's a shame. The cat could have been as lovely a part of humanity's sometimes graceful relationship with nature as Gertie the Duck. Now it's mostly a sordid tale of humans at their worst.