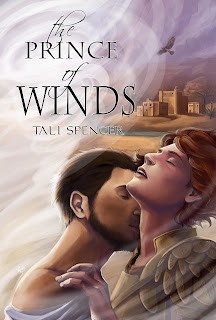 I loved creating the world of this book. It has everything I enjoy: hot men, majestic eagles, epic battles, exotic civilizations, gods behaving badly, and magic. In fact, I love this world so much I have sequels planned.

Even more special to me is that this book began as a dream that haunted me for years. I was still a teen when I woke up in this dream where I was a young man, wounded and holding a dagger. A merciless sun beat down on the barren desert rocks where I’d found shelter, but I was dying of fever and thirst. Then a shadow blocked the sun and someone pressed water to my lips. I looked up at a man's face and I drank. But I knew the man was one of the enemy…

And then I woke. But to this day that dream is the most vivid I have ever dreamt. It felt, tasted, and smelled completely real. If I met the man who gave me water here, today, I think I’d recognize his scent, his eyes and the shape of his mouth.

Many years later, during a difficult time in my life, a friend dragged me to a past life reader to find out if I had karmic enemies (things really were that bad). It was a lark for me, but my friend was certain I had lived before. I had never told her or anyone about my dream. I was stunned when the psychic said my first life had been as a young warrior in ancient Mesopotamia. I’d figured out through research on clothing, chariots, and weapons that ancient Assyria was where my dream had taken place.

To this day, I’m not sure if I believe in past lives—turned out I had no karmic enemies, just a nasty present day problem—but it sure was interesting about that Mesopotamian warrior. And I started thinking there was a story there. I tried a couple of times to give the dream guy a story, but every love interest I tried to give him slumped on the page. His rescuer’s daughter… the tribal princess… a queen of Ur. No woman I tried seemed to click with him. And then one day something I should have known from the beginning hit me between the eyes: he was in love with his rescuer.

I changed the scenes somewhat for the book, and mixed things up a bit, but you’ll recognize the dream. I like to think I continued it nicely and gave my former life a new spin.

Here’s the blurb for The Prince of Winds.

Rimmon may be an eagle warrior, but he’s never known war, and he’s never known love—until his kingdom’s army is destroyed by Ekari, the demon of winds, and he is captured by Melkor, one of the Iron Horde that has been killing off the world's gods. Although those gods have cursed Melkor and his brothers to be conquerors and to never be loved, Melkor hopes to overcome his fate and carries Rimmon off to his island. There, Melkor heals Rimmon’s wounds and teaches him about sexual pleasure, earning the young warrior’s trust and fanning the flames of an attraction both men yearn to embrace. But the curses of vengeful gods are difficult to break, especially when Rimmon discovers Melkor is the wind demon who destroyed his home.

You can read the opening scenes of the novella here. [EXCERPT]

For a chance to win a copy of the book, just leave a comment and tell me if you believe in past lives. On Monday morning, September 17th, I’ll put the names of commenters into a hat and pick two winners.

Thanks for helping me celebrate the publication of this book. :)

Oops! Edited to add... remember to leave an email address so I can contact you and send you your book if you win! I'll announce it here, of course, but an email makes it easier for everyone. Thanks!
Posted by Tali Spencer at 8:10 AM