Meet the Author of Pricolici 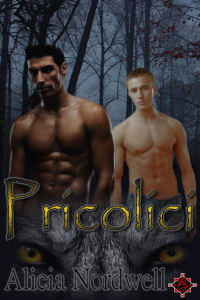 The excitement of getting that first book published is hard to explain, but it rates right up there with childhood Christmas Eves and wedding days and, yes, the birth of a child. Today Cia, aka Alicia Nordwell, has stopped by to talk about her first baby... I mean book, Pricolici. Look at that gorgeous cover! It captures the gritty, fiery vibe of her world of shifters and hot, hot, hot men. And not only does she create likable characters and a multi-layered world, but she's a warm and wonderful person in her own right.

I once had a reader whose opinion I really valued tell me a story was like schoolwork from a 17 year old and lacked balance. It stung, but that was their issue with the story content. I asked later why the author felt that way, and it turned out not to be style so much as their visceral reaction to certain elements in the story.  The best compliment? I had a reader tell me that my Carthera story felt ‘real’ to them, even though some of the characters had wings or fangs. My goal when write modern fantasy is to make it seem almost as if you could go to the store and meet one of my characters, so that meant I hit the nail right on the head.

2.      If you had to choose, which writer would you consider a mentor?

I don’t think anyone really mentored me, exactly, but I did have several authors who I turned to when I first started writing for advice and input on my actual story. Lugh and Nephy from Gay Authors gave me exactly that, along with a great reader friend, Paya. My beta, fellow author, and good friend (even if we haven’t met in person) Renee Stevens and I helped each other learn the craft of writing together.

3.      Are there any new authors that have grasped your interest?

Well, recently I read a story by Ryan Loveless called Ethan, Who Loved Carter. She’s not exactly a new author, but I hadn’t read her work before. I loved this piece. I even cried. I hate admitting that, but it was that good. You can check out the review on my blog from last Monday. On Gay Authors, a home of a lot of great free fiction, I’ve been following Mann Rambling (also reviewed on Monday) and Randomness who wrote To Move Forward.

What aren’t I doing right now? I’m editing several older stories. Currently I’m writing and posting Adverse Effects along with the short story, Never More Lonely, from the Wednesday Briefs group on my blog. On the sly I’m working on 2 yet to be titled stories. One will be a modern mmf and includes elemental magic. The other is a modern mm story that includes a winery, two men, and a little bit of a surprise, along with some intrigue. That’s a lot in one story, but is one of mine, after all, lol! I’ve also been doing research for Benny’s story from my Carthera series.

5.      How did you become involved with your publisher?

Well, two of my author friends had already submitted stories to Romance First Publishing. I tend to be slow to try new things, but when they both had great experiences I said what the heck! and sent in a submission. Stephanie said she really liked, and wanted, the story but it needed more. She was right and so began the last six months worth of re-writing, expanding, editing, editing and MORE editing. I’m extremely grateful to everyone who has been involved with the process for all their help. I’ve been very impressed and encourage anyone thinking about submitting to send their stories in!

Forced out, Tucker was vulnerable and alone. Betrayed by his haitas, he unknowingly drove straight for Pricolici territory. Their alpha claimed him, as a hultan and his mate. Tucker didn't believe him ... at first. Facing an attack from Stelian's ancient enemy, Tucker found out what he truly was.

“Did someone try to hurt you on your way here? Were you attacked by a human?” Stelian’s voice was a low snarl.

“No!” Tucker clenched his hands into fists.

“Shane got lucky then.”

Tucker tried to stay calm and ignore his resentment at the lupe’s obvious belief that he was too weak to protect himself from anyone. “I can handle the humans and if you’ll just let me go, then my freaky pheromone problem won’t affect anyone in your haitas either. I’ll leave right now.”

Stelian’s nostrils flared as his hands slid over his lower stomach toward the waistband of his pants. “What makes you think they haven’t already? That I’m not thinking about bending you over that table and mounting you right now?” Stelian smirked at him.

He shuddered a little at the heat in Stelian's voice, and the look in those fierce eyes.

Shit! He hadn't really noticed but Stelian had moved closer as they talked, inch by slow inch. Amazingly, Stelian was only several feet away, and Tucker could feel the alpha’s aura flowing toward him. He hadn't realized his awareness of the lupe’s power was gone until that moment. Stelian dominated the room even without the power that reinforced his place in his haitas.

"Don't worry, you're in my territory now." There was satisfaction in Stelian's voice. "If your haitas didn't know what they had, then it’s not my place to enlighten them."

"What they—” Tucker froze when Stelian stalked around the table. He grabbed the chair and slung it sideways. Stelian’s huge hands slammed down on either side of Tucker and his arms made a cage, penning Tucker when the smaller lupe would have tried to bolt.

"Oh yes. You're very special," Stelian said as he bent down to drag his nose up Tucker's neck. A stinging bite at Tucker's ear and a low growl stopped him when he tried to jerk his head back.

Tucker froze at the order from a voice laced with the wolf's growl. The ache he’d felt earlier from the bartender had nothing on the way he felt from the suddenly overwhelming surge of lust that emanated from Stelian.

Something welled up inside him and Tucker felt his eyes shift. Everything became sharper and clearer when he saw through the eyes of his wolf. He knew his normally murky green eyes now shone as golden as the larger lupe's.
Entranced by the angles and shadows he'd missed with his human eyes, Tucker stared at Stelian's dusky skin where it stretched tight over his sharp cheekbones. The Pricolici were mostly old lupes that had emigrated from Romania. They’d passed that coloring on to their pups. Stelian’s Romanian blood gave him a deep skin tone and even the yellow eyes of an excited werewolf looked natural on him, as if he was never fully human.

Tucker couldn't help but lick his lips as he stared at the strange lupe's strong and handsome face that matched the hard, muscular body he’d been pinned against earlier. All lupes were stronger than they looked, but Stelian was taller and more heavily muscled than the biggest male in his old haitas. Unbidden, the power inside Tucker poured forth and met Stelian's aura.

There was a sensation of blending, a mingling of two different yet similar forces. Stelian’s hand was hot against Tucker's neck as he tugged at his chain, pulling his face closer to Stelian's. The lupe's breath puffed against his lips, only inches away from Tucker’s. It startled Tucker and he jerked away, his power snapping back inside him like a rubber band as his chair tipped over backward.

~~~~~~~~~~~~~~~~~
Thanks, Cia! Here's a bottle of champagne and some confetti. We'll kick back and party when your book launches on the 28th. That's Friday, so you know what I'll be reading this weekend. :D In the meantime, here's where to find Cia and her book.