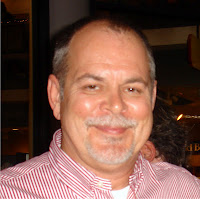 Today I'm welcoming Michael Rupured, who's agreed to share some his of reflections on what it was like to be a young gay man when life was less complicated, and yet more complicated, than it is today. Michael is friendly and loads of fun, so be sure to check out the blurb to his upcoming book and his links at the end of this post.

Two girls claim they were my first kiss. Cindy told me several years ago that we kissed on the swing set in her backyard when I was in fourth grade. The last time I saw Pam, she reminded me that we’d kissed at school in front of the fish tank in fifth grade. The news, in both cases, came as a surprise to me.

Joanie was the first girl I remember kissing. We were in a box fort in a neighbor’s basement when I was in sixth grade with another boy and girl who were attempting to climb inside each other’s mouths. I kissed Joanie on the cheek and apologized the next day for my ungentlemanly behavior. Momma said I should.

Details from the Monday night ten years later when I visited my first gay bar stand out in my mind just as clearly. As soon as I saw guys who defied the stereotypes I’d been raised to believe were the norm, I knew I was gay. By Saturday I was involved with what I believed would be my first serious boyfriend. Snort.

I was 21 years old. The year was 1979—ten years after Stonewall and two years before the emergence of AIDS. The gay bar in Lexington, Kentucky was a refuge from straight society and the only place where it was okay to dance and flirt with men without fear of getting beat up by bullies and rednecks. Outside, things could be dangerous, but inside we were safe.

Oh, the memories…. I think of those first few years at the bar the way my hetero friends talk about high school. I ran with all the popular boys and wore my gayness like one of those high school letter jackets with the shiny sleeves and elastic at the waist. Girl, I was G-A-Y with all capital letters.

I lived for the bar. Six nights a week I whipped my hair into a fierce look, squeezed into my tightest blue jeans, and headed downtown. Especially in those early years, a wild night of drinking, dancing, and outrageous acts followed, including a few that are finally legal in most states and some that never will be.

The dance floor was the center of my world. With a drink in one hand and a cigarette in the other, I danced with a passion and energy I envy today. I fell in and out of love hundreds of times, ending up with a broken heart more often than not. Bouncing back ranged from months to minutes, depending on the circumstances and my investment.

When I wasn’t sending “Yes, I’d love to” messages with my eyes to some new love object across the dance floor, I watched myself shake my groove thing in one of the many mirrors positioned on and around the dance floor. Don’t laugh. Everyone was doing it.

My friends and I danced in one big group in the middle of the floor. We owned that place, and everyone in it had come to see us. Or at least, that’s what we thought at the time.

Recreational sex was the rage. STDs didn’t have initials yet, and could be cured with a couple of shots of penicillin. Condoms were for straight people.

Guys fooled around on the dance floor all the time. We’d position ourselves around them so nobody could see. That’s one of the first moments I had this sense of solidarity—of not just belonging, but of being an insider and privy to something that was somehow just for us. I know, sounds kinda sick now. You had to be there.

I remember afterhours parties with bedrooms or basements piled high with writhing naked men and observers. I’m not an exhibitionist, nor has voyeurism ever really been my thing. And princess that I was, I really didn’t date those boys, however fine the line between us may have been.

Unlike women in my past who’d been interested but didn’t want to appear too forward, men whistled from across the room and yelled sex acts they’d like to perform with me. It was a man’s world and there really wasn’t anyone to say no. I had a blast.

AIDS changed everything. People, gay and straight alike, were afraid. The bar was practically deserted until Saturday nights when couples came out for a night on the town. Instead of every night, I dropped back to once or twice a week, then a few times a month, to a couple of times a year. Now it’s been years since I went to any bar, gay or straight, mostly because I can’t stay up that late.

I hear the number of gay bars is declining and that they may become obsolete. Some blame hookup apps and web sites for the demise of gay gathering places. Seriously?

I won’t deny that getting laid was an ever-present goal. Isn’t that normal when you’re 22? But we went out to dance, drink, and spend time with our friends. Nobody worried about getting laid, not before last call anyway.

Things have changed so much since then. If you ask me, gay bars are closing because twenty-somethings care as little about sexual preference as they care about race. Being gay isn’t a dirty little secret to them. They say, “It’s who I am so deal with it.” God love ’em!

Nobody in my circle of friends thirty-five years ago ever mentioned gay marriage. The notion was so far from our reality that I don’t think we ever saw it as a possibility. Things are very different now.

So many gay men my age and older have died. They’re not around to tell stories about those early days. People forget how far we’ve come. They don’t know about our Big Moments and have never met our pioneers.

Last month I added another Big Moment to my own collection when I got an advance from Dreamspinner Press for Until Thanksgiving, my first novel—an m/m romance-thriller to be released in December or January. Set in 1997, it’s the first in a series of novels with holiday titles revolving around the same cast of characters and taking place from 1966 to today.

Gay and pushing forty, Josh Freeman knows his best years are behind him. After his partner of seventeen years has an affair with a younger man, Josh buries himself in a pile of take-out boxes, empty bottles, half-smoked joints, and self-pity. His best friend, Linda does what friends do—gently kicks his ass and encourages him to give the job he’s been offered in Washington D.C. a try—at least until Thanksgiving.

Thad Parker, a DC-based relocation expert, rarely dates and has never fallen for anyone. But when he meets Josh Freeman and shakes his hand, a spark hits him like a lightning bolt. When Josh takes an active interest in someone else, Thad decides to wait.

While he waits, misunderstandings about Thad’s relationship with his older roommate, a reckless encounter with a serial killer, and a brush with death conspire against Josh and Thad’s chance at happiness.

Thank you, Tali, for this opportunity to meet your fans. I’ll let you know when I have a cover, the official blurb, and a release date. Until then, I invite your readers to follow me via: