YAM LGBT Blogathon: Identity and Power in The Heritage of Hastur

For this post for the YAM LGBT Blogathon, I’m putting on my literary hat.  Though I have a lot of fun with writing fiction, I take literature seriously. The words we create and the words we read reveal everything (yep, everything) about who and what we are.

Genre fiction is no exception. I think genre fiction is too readily dismissed by literary pundits. Genre is, for a lot of the population, where it’s at.  “It” being us, as in where we are on the continuum of cultural progress or decay. Being an optimistic sort, I like to think we’re making progress. It would be sad if we weren’t advancing toward something better. 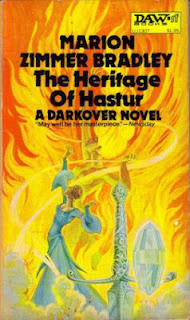 As a child, I read pretty much everything (yes, I had uncommonly permissive parents), but I gravitated toward speculative fiction.  When I read Marion Zimmer Bradley’s The Heritage of Hastur, probably the best of her Darkover novels, I was a teenager and already deeply romantic. I fell in love with the parallel tales of two young men, Lew Alton and Regis Hastur, as they grappled with alienation and discovered who and what they really were. They had exceptional abilities to uncover, of course (most speculative main characters have exceptional abilities), but they also grappled with sexual love.  Lew was the more traditional character, with a traditional male-female romance.  Regis was more confused, reluctant to admit or pursue his feelings for his paxman, Danilo.

I didn’t realize it at the time, because I wasn’t looking for thematic development in my reading material in those days, but the novel closely tied the discovery of sexual identity with the unleashing of dangerous power. This is particularly true in the case of Regis, who believes he is giftless, devoid of the powerful laran ability that has kept his family in power for centuries. When Danilo goes missing, however, and Regis risks everything to find him, his gift begins to awaken.  The strong barriers he’s erected against his feelings for other men—he had a childhood crush on Lew—also bottle up his gift and it’s threatening to destroy him if he does not find a way to release its terrible energy.

Lew, in the meanwhile, unleashes a catastrophe.

Sexual energy is powerful stuff. Who can say how much of human history it has driven, created and warped? What stuck with me about The Heritage of Hastur was the deep connection between embracing oneself as a sexual being and controlling powerful forces. The novel showed two young men, one of whom succeeded and the other who could have. The gay relationship was tender but conflicted, and it was not an easy path for Regis to find himself. But he did. And that was his triumph.  He found his power when he accepted himself. 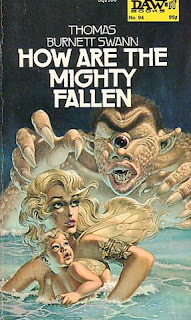 I often found myself recalling that lesson over my formative years, whenever I would hear people say gays should reject their sexuality. Priests told me gay men should be celibate (that would have killed Regis). Politicians wanted queers to be invisible. Others simply wished they’d shut up and go away. Because of Bradley’s book and others like them (the books of Thomas Burnett Swann were another big influence, like the one in the picture, about the gay pairing of Biblical David and Jonathon), a generation of science fiction and fantasy readers grew up with quite different views of how society could and even should be.

By the way, in case you haven't noticed, none of the covers of these books suggest a male-male relationship. They were published at a time when gay relationships were not just in the closet, the door was also locked. Publishers and the authors themselves often had to fight just to put the books out there.

What makes humans powerful and amazing is our spirit. The human spirit is the most powerful thing I know. Why would anyone want to cut another person off from what makes them unique and whole?  The Heritage of Hastur exemplifies that argument, and I’m glad that as a kid I had the chance to read it.
Posted by Tali Spencer at 4:23 PM