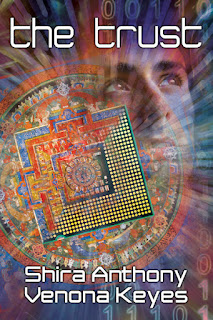 Artificial intelligence (AI) is the subject of three of my favorite sci fi movies of all time:  “2001, A Space Odyssey,” “Blade Runner” and “The Terminator.”  All three movies involve self-aware computer “beings.”  Wherever you look, whether it’s in the toy store, on line communities, or science, AI is the big new thing.  My daughter just got a new iPhone that talks back to her (Siri).  So when my co-author, Venona Keyes, suggested a gay spy thriller featuring a microchip that is like a virtual hero, I said, “Way cool!”

“The Trust” is the story of Jake Anders, who was recruited into a CIA-backed agency, The Michelson Trust, by Trace Michelson, the grandson of the agency’s creator and the agency’s current director.  The flesh and blood Trace trains Jake and ultimately asks Jake to participate in “Project Resurrection.”  Jake receives one of two prototype Sim chips, the “Trace Sim,” created using the life experiences and personality of Trace himself.  But when Trace is assassinated, all that remains of Trace is embodied in the microchip Jake now shares his mind with.   Or so it seems, until the Sim chip becomes Jake’s reality.

So what happens when you fall in love with the artificial recreation of a man?  And what happens when that artificial man becomes real?  For Jake, he begins to doubt that Trace is really dead, and he goes on a dangerous journey across continents to uncover the truth behind the legacy of Trace Michelson and, perhaps find Trace himself.  Along the way, Jake discovers that the Trace Sim is capable of far more than anyone ever realized.

Is there a happily ever after for Jake?  Yes.  Definitely.  It’s a romance!  How do we get there?  That’s the fun part.  You’ll have to read the book to find out! –Shira

“Fucking traitor Sandoval,” Ryan Roberts growled from nearby.
“If Jake hadn’t killed him, I’d’ve gladly done it myself.” John Carson—Jake recognized the voice.
“He’s a damn lucky bastard.” Ryan’s voice again.
“Un-fucking-believable. Got that tourniquet on and still had the presence of mind to write the time on his leg,” added Carson.
“I gotta hand it to ’im—got Sandoval once in the eye, then turned around and shot ’im to make sure he was dead—all while he’s fuckin’ bleeding to death.”
“Gentleman, Agent Anders needs to rest.” A woman’s voice this time: soothing, no-nonsense, and familiar.
“Sorry, Dr. Carroll.” Carson sounded embarrassed, but Jake could hear the note of concern in his gruff voice. “We just wanted to be here when Jake wakes up.”
“He will regain consciousness when his body’s ready. He’s lost a lot of blood, and he’s been in surgery.”
“We’ll wait,” Ryan replied. Jake almost smiled to hear the stubbornness in Ryan's voice.
“Agent Roberts, Agent Carson, the director has called a meeting, and you both need to be in attendance.” Stephanie Carroll’s voice was now commanding.
Jake felt a strong hand squeeze his shoulder. “You better get your lazy ass outta here, Anders, or I’m gonna have to beat the crap outta ya.” The sounds of chairs scraping the floor and fading footsteps followed Ryan's words.
“It’s all right, Agent Anders. They’re gone,” Jake heard a few minutes later.
The dim light of the room was too bright. Jake squinted, blinked several times, and slowly opened his eyes. He had a splitting headache.
“Welcome back to the world of the living, Jake.”
Jake attempted to smile back at the gentle-voiced doctor, but it came out more like a grimace.
“Are you in pain?”
“My head feels like it’s gonna explode.”
“I’ll give you something.”
Jake watched as the tiny woman took a syringe and injected it into the IV in his arm. He felt warmth radiate from the site of the line as his muscles relaxed and the pounding in his head began to lessen.
“Thanks. I think I feel less ‘vincible’ now,” he said, managing a lopsided grin.
She smiled at him. “Jake, I really can’t tell you how impressed I am with the skills you exhibited under the extreme pressure of the situation.”
“I had help.”
“Oh?”
“The Trace Sim. He told me to slow down my breathing and meditate. I imagined my artery knitting itself back together.”
“Impressive. I didn’t think the simulation microchips were so detailed in their programming.”
Jake shrugged. “Neither did I. It’s like he was right there in front of me.”
“When our bodies are under acute stress, we often imagine things,” she replied in a kind but patronizing tone.
Jake guessed that she'd heard the recording of his call for help and had wondered why he'd spoken Trace Michelson’s name.
“He seemed so real. Not like the usual Sim.”
Her answer was what he'd expected and hoped for: reassuring and kind. “The brain is an amazing organ. In times of severe stress, it can be a powerful tool to ensure survival.”
The tension in his shoulders abated with her words.
She’s right. It was probably a combination of the Sim and my own imagination. Either way, it worked, right?
She offered him a sympathetic smile. “You need to rest.” She checked the IV and made a notation on the chart at the foot of his bed.
She turned to leave, then paused as if considering something. “You know, Jake,” she said with a contemplative hand to her chin, “applying a tourniquet made from the toilet roll spindle and your torn shirt was quite remarkable, given the extent of your injury. But you didn’t really need it—the artery had already begun to heal on its own. It appears Dr. Michelson’s techniques are more effective than we originally thought. Quite fascinating.”
“Tourniquet?” It was the second time someone had mentioned it since he'd regained consciousness. But he didn’t remember a tourniquet, let alone applying one to himself in the heat of the moment.
“The one you placed on your leg before you lost consciousness.”
“I don’t remember that. The last thing I remember is Trace.”
“Writing the time you placed the tourniquet on your leg required true presence of mind, Jake,” she continued, undaunted. “We were able to quickly ascertain how long the circulation had been compromised.”
“I don’t remember that either.” He frowned.
She gave him another reassuring smile. “You really must get some rest now. I’ll be back to check on you later. Would you like something to drink?”
“Something more than ice chips?” he asked with a hopeful expression.
“I’ll see that you get some water.”
“Thanks.” He closed his eyes. He heard her walk out of the room and close the door behind her.
Tourniquet? Writing the time on my leg? And who killed Sandoval? I couldn’t have shot him; I didn’t have my gun….
It made no sense. An image of the man with dark hair and slate-blue eyes filled Jake’s mind. He'd seen that face many times while training with his Sim. He had known the real man himself years before—Trace Michelson had recruited Jake into the Trust. But for years, it had been only a virtual Trace who had inhabited his mind, training him, sharing his knowledge with his host as all Sims did.
This was different. He was so… real.
He forced his eyes open again and stared up at the ceiling. The gray acoustic tiles provided him with no answers.
“Idiot,” he muttered as he fought the overwhelming urge to sleep. “Of course he wasn’t there. He’s been dead for nearly five years.”
About Shira Anthony:  In her last incarnation, Shira Anthony was a professional opera singer, performing roles in such operas as Tosca, Pagliacci, and La Traviata, among others. She’s given up TV for evenings spent with her laptop, and she never goes anywhere without a pile of unread M/M romance on her Kindle.

Shira is married with two children and two insane dogs, and when she’s not writing, she is usually in a courtroom trying to make the world safer for children.  When she’s not working, she can be found aboard a 30’ catamaran at the Carolina coast with her favorite sexy captain at the wheel.

Shira can be found on Facebook, Goodreads, Twitter (@WriterShira) or on her web site, http://www.shiraanthony.com. You can also contact her at shiraanthony@hotmail.com .
Posted by Tali Spencer at 12:00 AM