The Cool Part of his Pillow - Interview with Rodney Ross 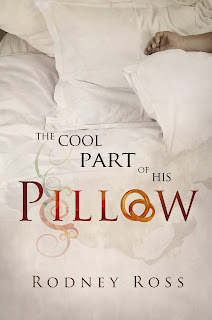 How does it feel to love someone madly for a long time, to have a perfect life with that someone . . . and then lose them?  Recently I had a chance to talk with Rodney Ross, author of The Cool Part of His Pillow, a novel just released by Dreamspinner Press.  I find that interesting people tend to write interesting books, so let's listen in on what Rodney has to say about his book, writing, and life.

I read the excerpt for The Cool Part of His Pillow (TCPohP).  It gave me a strong sense of Barry and Andy’s love and then hit me in the gut.  Is the book a romance, or a journey to recovery?


I would say both. Barry Grooms is a success by any measure: expansive interior design gallery, 20-plus years of stability with partner Andy, financial security, he still has all of his own hair and teeth. Then everything changes when, on Barry’s 45th birthday, a horrendous construction crane collapse kills Andy and their two pugs.


His plunge into widowerhood is surreal – casseroles of sympathy, being offered someone else’s snotrag, a parasitic grief support group –  yet Barry is damaged, not destroyed, and as he slowly rebuilds a world largely destroyed, my hope is anyone who has experienced loss, felt backed into a corner, dealt with know-it-all-but-well-meaning-friends-and-relatives or retreated into denial, will find resonance.


It’s also funny, full of wicked observation. Not rimshot jokes nor Neil Simon-ish set-ups…more humor that naturally emerges from situations…placing two very different people in a room and letting them have at it…characters who don’t seem to have a self-edit chip in their head. Misery is so much more fun when sprinkled with the macabre or the politically-incorrect, the scatological or the blasphemous. Barry’s smartassedness, his skeptical eye rolls, are what ultimately save him.


I notice you have a book trailer.  For the new writers among us, would you tell us some of your thoughts on book trailers and why they make an effective marketing tool?

Actually, I have several TCPohP trailers; by going to YouTube, you can watch one, then access the rest, some teasers, others time-sensitive, a couple more general. Having come from -- or, rather, escaped -- the Advertising arena and its bloodlust, I know too well how society is visually-driven. And don’t we all love a good Coming Attraction at the local multiplex (after the 22 goddamn commercials for soft drinks and one-night-only opera telecasts we’ll never attend?) A carefully-crafted trailer can give the potential reader a hint of what’s to come, without spoilers or too much hyperbole. My endgame was to attract interest. I don’t need an Addy; I already have several.

Who designed the cover for your book and what do you like best about it?

Anne Cain, who does a lot of work for DSP. Beyond the literal emptiness of the bed, a pillow clearly not slept upon and a forlorn hand, I like the detachment…almost seen through parchment, from an impassive distance. I like how the wrinkled sheets trail down and recede into marbelization. The colors aren’t quite real. Nor is the character’s life after being thrust into the darkest recesses he could ever imagine.

The worst: being informed by a literary agent probably no older than my tweezers that my writing was “too jazzy” for her palate. I protested, “But I hate jazz!” I still don’t know what that means, but I do my best now to avoid mentioning saxophones and Ann Hampton Calloway as I wordsmith. What a load of horseshit. You may as well tell me you don’t like the way I type, it’s that impenetrable.

The best: a Key West, FL neighbor who was once a columnist for the Chicago Tribune telling me, upon reading the raw manuscript-- before I ever submitted it anywhere --  that TCPohP gave her an asthma attack. My new goal is to always make someone reach for an inhaler. 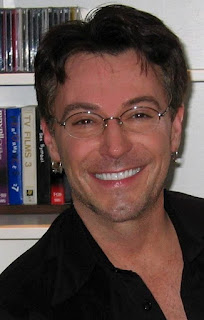 What aspect of your own life has most influenced your writing or storytelling?

Being a gay male, certainly, and permit me to be demure and evasive as I add one of a certain age, I wanted to voice something relevant to a certain demographic: loneliness borne of loss, not of abandonment or cheating or even illness, but unthinkable circumstance. I am remarkably fortunate to be with a man who has tolerated and treasured me for a very long time. If our relationship was measured in dog years, it would be something out of Jurassic Park. Having known this bliss, I wanted to talk about the absence of love after having had it…when AARP is about the only thing that may come courting. Love is visceral and tactile, as well as emotional, and its absence can cause as much physical as emotional distress. And I ain’t talking blue balls.

What part of the writing process do you enjoy the most?  The least?

The challenge is always sitting down and writing, while also being depressingly aware that the final polish is so, so distant. Writing is so damned isolated, and isolating. A writer looks for distraction: the shit-laden litterpan to scoop, or sit-ups to attempt, a martini that’s just yelling to be shaken. I always have a notepad and pen, or a mini-cassette recorder, handy. I treat my muse like a sneeze: I gotta catch the spray when I can!

That said, I cherish the ability to create and manipulate lives in the way we, of course, cannot make ours so malleable. The inclination to write is so embedded, I cannot imagine NOT writing. I was a creative child, self-isolating and brooding. Most is nature…a bit is nurture…all of it is heavy lifting.

What surprised you most about the process of getting a book to market?

Well, I’m still on the journey. I cannot begin to predict the turns, the fast stops, the backing-up I will have to do to push my novel in conjunction with Dreamspinner Press (DSP).

Writing letters of inquiry and sending novel samples – “send us your best chapter,” some implore, as though I can disconnect one from the other as a perfect stand-alone example of my ability – is especially brutal, one that embodies the word dread.

My favorite rejection letter was an E-mail from another literary agent (do you sense a trend here?). It was 3 words in response to what I thought was a succinct plot summary coupled with a witty turn of phrase or two and the first three chapters.

The E-mail read: Not for me

No greeting, no signature, not even a period. She didn’t have time to close the fucking sentence.

Any upcoming projects you would like to let us know about?

Beyond conceding that I AM at work on a new novel, that’s a big sssssssshhhhhh. I can say that it’s about bad luck, and good -- the paths chosen when fortune smiles on us, the desperate measures taken when it doesn’t. My sleep is haunted by it, which doesn’t make for a restful night with my partner, but that’s part of the process: the discovery, the layers and finding new possibilities. 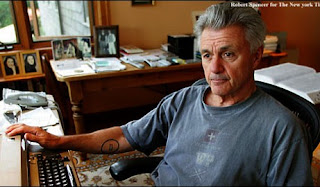 Is there an author you would really like to meet and what would you talk about?

I always cite John Irving. The World According To Garp opened my eyes to possibilities in literature that didn’t exist to me prior. His subsequent work has been just as vital, and his style brings an empathy, clarity and humanity to the most unrelentingly cruel encounters and unexpected character pivots. I can only aspire to his literary prowess, and I would probably just weep copiously or lose control of my bowels in his presence, neither of which would make a favorable impression.

Time for expanding the bookshelf.  Name one book you recently read and loved.

Like the whore I pretend to be, I loved the trashy and salacious Full Service, by Scotty Bowers, the Hollywood hustler who serviced people like Cary Grant.  Whether it is true nor not is inconsequential. I crave a little dirt to sprinkle over my morning egg, and this tell-all supplied it.

Socks. . . something to wear with shoes, or the high point of your fashion day?

Socks? I live in Key West, Florida. What are socks?

Here’s the blurb for The Cool Part of His Pillow, followed by a specially chosen, heartbreaking excerpt:

The midforties are that time in a gay man’s life when his major paradigm shifts from sexy to sensible. But when Barry Grooms's partner of twenty years is killed on Barry's forty-fifth birthday, his world doesn’t so much evolve as it does explode.

After navigating through the surreal conveyor belt of friends and family, he can't eat another casserole or swallow much more advice, and so, still numb, he escapes to Key West, then New York. He embraces a new mantra: Why the hell not? He becomes so spontaneous he's ready to combust. First, he gets a thankless new job working for a crazy lady in a poncho, then has too many drinks with a narcissistic Broadway actor. Next, it's a nude exercise class that redefines flop sweat, and from there he’s on to a relationship with a man twenty years his junior, so youthfully oblivious he thinks Karen Carpenter is a lesbian woodworker.

Yet no matter how great the retreat from the man he used to be, life's gravity spins Barry back to the town where he grew up for one more ironic twist that teaches him how to say good-bye with grace.

I push away the toss pillows plumped horizontally under the duvet to approximate a body alongside my own.
I hate this foam memory mattress. I wish we’d kept our very first lumpy, concave mattress. Andy’s dent would still be in it. I could sink into it, let it swallow me up.
I will never again hear him whisper into my ear. “Sleepy time now.”
I will never again feel his heartbeat when he wakes from nightmares, holding on to a spindle of our headboard.
I will never ever again kidnap the cool part of his pillow. It was just one push/pull in our 23 years of push/pull continuum. When my own was airless and warm, I would find that unoccupied part, I would slowly pull the pillow toward me until his shoulders grazed my breastbone, nestle my head behind his and go to sleep. It didn’t stay cool for long. I’d restlessly return to my own, or he’d wake enough to take it back with a grouchy harumph but two, three times a night my right hand, like a divining rod jerking toward a source of water, would go wandering for fresh, for safe, for cool. It was like winning a prize. I will miss those two big heads full of alpha male dreams sharing one pillow.
Now it’s all mine.
I can have as much cool as I want, can dominate every bit, which is very different.

Again, I want to thank Rodney Ross for stopping by to brighten up this blog and provide a breath of fresh air!
Posted by Tali Spencer at 5:09 AM