On Thursdays I post excerpts from a novel I’m working on. Last week was a long one (long enough to be a full chapter, so I made it one). This week’s episode is shorter, as Vorgell and Madd accompany Gillja to meet a mysterious suitor. 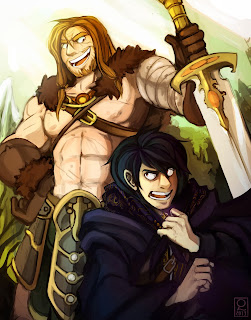 Thick as Ice, Chapter 4a

Vorgell adjusted his grip on his Scurrian axe and kept sharp senses on the crowd that parted to let the Baroness Gillja’s palanquin pass. He was skilled at many things, but his immediate task was to walk with the palanquin, heft his weapons, and look like a man ready to lop off heads at a moment’s notice. This he did with ease. Among other things, he knew how to lop off a head and displayed the kind of muscle needed to do it. For this and other reasons, perhaps his fearsome scowl or the basilisk perched upon his shoulder, onlookers took him as a threat and stayed well clear of the Baroness.

Though he preferred bodyguard work to thieving, at which he would be only middling if not for Madd’s magic, and it suited his strengths, the job possessed little stature and he actively disliked some of the men he’d been hired to protect. Scoundrels, most of them. The kind of men who robbed entire kingdoms, siphoned gold from temples, and condemned rich and poor alike to misery through lawmaking and taxes. He’d been tempted to kill a few of them himself, except that to do so as a bodyguard was a dereliction of duty.

Gillja, on the other hand….

The palanquin wobbled to a halt just shy of the wall surrounding the Quarter of Peacocks, wherein they would find their destination, and Madd climbed out. It wouldn’t do for Gillja to pull up at a suitor’s palace and have a man climb out of her conveyance. As soon as said man was out, the group started walking again.

“So, what did the two of you talk about?” Vorgell inquired.

“Moon charms. See the moon there?” A pale silver orb hung just above a purple-flowered tree. “I pulled a little magic into a necklace she’s wearing. My Gran made the necklace originally out of moonsilver. A talisman like that wards off all kinds of spells.”

This seemed unlike Gillja. The fact that she was witchkin was a closely guarded secret. Most of the city’s witchkin, a poor and persecuted lot, were not aware she was one of them. Madd knew, but only because he and Gillja had met and bonded through the late and unlamented Baron Flemgu. Bizarrely, each had helped free the other.

They stopped again, this time facing a gate in the wall. Two immense statues, peacocks gilded and enameled with jewel colors, stood to either side of the passage and arched graceful necks toward each other, their dipping heads forming the shape of a heart. The gate looked very loving, but Vorgell had never been able to make sense of it: from what he’d seen, most denizens of the Quarter of Peacocks were quite murderous. That included the guards.

He gave the two who scrutinized the palanquin his most menacing glare and they moved to the next visitor.

Ahead, just around the corner of a much smaller dwelling, loomed the palace of Duke Abiddes. Vorgell frowned.

“I don’t like it,” he said. It was only the truth. The palace was constructed all of black marble and was certain to be oppressively hot. The sinister aspect was not helped at all by displays of grotesque statuary. The stone dragon crouched atop the steps was twisted, its spine distorted as if it had been broken and its feet balled with malignant growths.

Petal craned her neck and stared at it.

“Give up. It’s already stone,” Madd said. His dark eyes scanned the entry for signs of wards.

Guards and a man appeared atop the steps. Like his palace, he was sturdy and dark, with black hair, a pointed beard on his chin, and eyes so cold they concealed all trace of his soul. When he walked to the bottom step, they could see he was also short. Pleased, Vorgell ever so lightly tightened his grip on the axe. For a short man to look up at him, the man must expose his throat.

The palanquin’s curtain moved aside and Gillja stepped out. Vorgell noticed that she did so artfully, extending a long and beautifully-shaped leg before angling out her lovely body and letting slip the veil from her waterfall of sun bright hair. No Sun Virgin could have been more stunning—and Vorgell had his pick of those when it came to bodyguard duties.

“My Lady,” the Duke murmured, taking her hand in his and lifting it to his lips.

“You wanted me to see your house. I am here with my escort.”

The Duke’s gaze swept the two men who were clearly not dressed in her livery. “We agreed there would be no wizards. The one looks like he could be a witch.”

Madd’s heritage was rather obvious. Only Gillja’s was not. “He is trusted.”

“Not by me. He cannot join us”—Abiddes held up his hand to indicate he had more to say—“but he can remain with the staff. In the kitchen, perhaps? To oversee your meal?”

Vorgell caught Madd’s narrowed gaze and understood. If Abiddes’ kitchen staff were not careful, the Duke would find himself plagued by the Blistering Trots. Doing so would require a bit of magic, of course. Perhaps, before the fine folk moved to the drawing room, Madd might find some way for the two of them to spend a few minutes alone. Vorgell’s cock plumped at the thought and he flexed his thighs to create some ease in his loincloth.

It took him a moment to refocus his attention on the conversation.

“… cannot possibly keep that axe. It’s too… serious a weapon.”

Abiddes perused Vorgell’s sword. “Too much longer than those of my guards.”

“Then we shall rid all of them of their swords.”

“There’s the small matter of the basilisk…”

She shook her head. “We negotiated this already. It will accompany the other to the kitchen. There only your cooks risk being turned to stone if they threaten the witch.”

“Which of course I would never do.”

“Of course not. It’s but a safeguard.”

“Which leaves us only with him to consider,” said the Duke. He and Gillja slowly ascended the stairs as they conducted their negotiation. Vorgell and Madd, and the guards, followed. “Perhaps you haven’t noticed, but he is much larger than any of my guards.”

“I like that about him. And I will not be without a chaperone. Would you feel more comfortable if I say you can have two guards… and I have but this one?”

The Duke stroked his neat little beard. “My two on one side of the room, him on the other?”

Gillja smiled and placed her hand on his arm. “And me with you on a lounge in the center of the room, yours for the rest of the morning.”

He smiled to show his fashionably pointed teeth. “Would I could halt the sun.”

Vorgell didn’t like the sound of that. But when the Duke’s man came to take away his axe and sword, he handed them over.

If that did not work, he risked sporting an dangerous weapon. 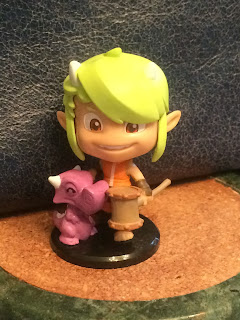 I enjoy feedback and am always happy to discuss readers’ thoughts or answer any questions. Oh, and here is the adorable character my husband got for me at GenCon.

Not quite a Vorgell action figure, but it does have blond hair and a cute little dragon!
Posted by Tali Spencer at 12:00 AM

Email ThisBlogThis!Share to TwitterShare to FacebookShare to Pinterest
Labels: Thick as Ice excerpt, Thick as Thieves, Vorgell and Madd