It's BAAACK! The Harvest: Taken by MA Church 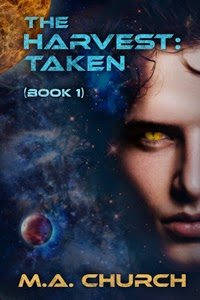 NOTE: This is a previously published work, but there has been some new material added.

Blurb:
In the year 2050, humanity finds out they are indeed not alone.

Earth governments negotiate a lottery, and Dale Michael assumes he's safe since he's under the Harvest age limit. How wrong he is. He's illegally harvested and claimed by Tah'Narian starship captain Keyno Shou. From the moment Keyno sees Dale, he knows he must claim the spirited human male for his own. What he doesn’t expect is a spitfire with a mind of his own—and a deadly disease that will require a risky procedure to cure.

Keyno: Dammit, Dale… Gods, nothing like just jumping right into the middle of it.

Dale: Oh by the way, I guess you could say “Dammit, Dale” is my nickname. Keyno tends to say it a lot.

“Gods, you’re green, Dale. Hold on.” Keyno hurried around the desk and helped me to the bed. He wet a washcloth, and the coolness did help settle my stomach some. Keyno buzzed their doctor, and seconds later he arrived with a portakit.
“Hello, Dale. I’m Doc. Remember meeting me earlier while you ate? I’m going to look you over and see what the problem is. All right? I won’t hurt you.”

Author bio:
M.A. Church is a true Southern belle who spent many years in the elementary education sector. Now she spends her days lost in fantasy worlds, arguing with hardheaded aliens on far-off planets, herding her numerous shifters, or trying to tempt her country boys away from their fishing poles. It’s a full time job, but hey, someone’s gotta do it!

She was a finalist in the Rainbow awards for 2013. Drop by her blog at http://machurch00.blogspot.com/