It’s no secret I adore Chris T. Kat’s writing. Her bright prose and sweet/hot sex scenes hit all my buttons when it comes to a great comfort read. Among other things, I count on her for the happiest of happy endings.

When I read The Wolf and His Diva I was hooked. Read the excerpt below to see why.

And tell me this cover is not adorable. I dare you.

Hi Tali, thank you very much for having me. I'm here to talk about my new release, The Wolf and His Diva, a m/m shape-shifter romance which was published by Dreamspinner Press on March 12th.
I'm a big sucker for good book covers, and especially for drawn covers. It's very fortunate for me that some fantastic artists work for Dreamspinner Press and I've been very lucky with my covers. The cover for Secret Chemistry (by Anne Cain) was a winner in the 2013 Rainbow Awards: fifth (tie): Best LGBT Cover – Illustration.
I love all the covers the various artists created for my books and each of them holds a special place in my heart. For the cover of The Wolf and His Diva, I wanted to display a tender scene, but it should also have a certain cuteness factor to it. A lot of people like hot covers the most, I know that. I'm ticking differently—I like the cute ones the best.
Paul Richmond created a gorgeous illustration with Billy cradled in George's hands. I love how both of them sport a small smile and the way they gaze at each other. Also, the light colors in the background are great; they lend warmth to the image.
Paul sent me a black and white sketch at first: 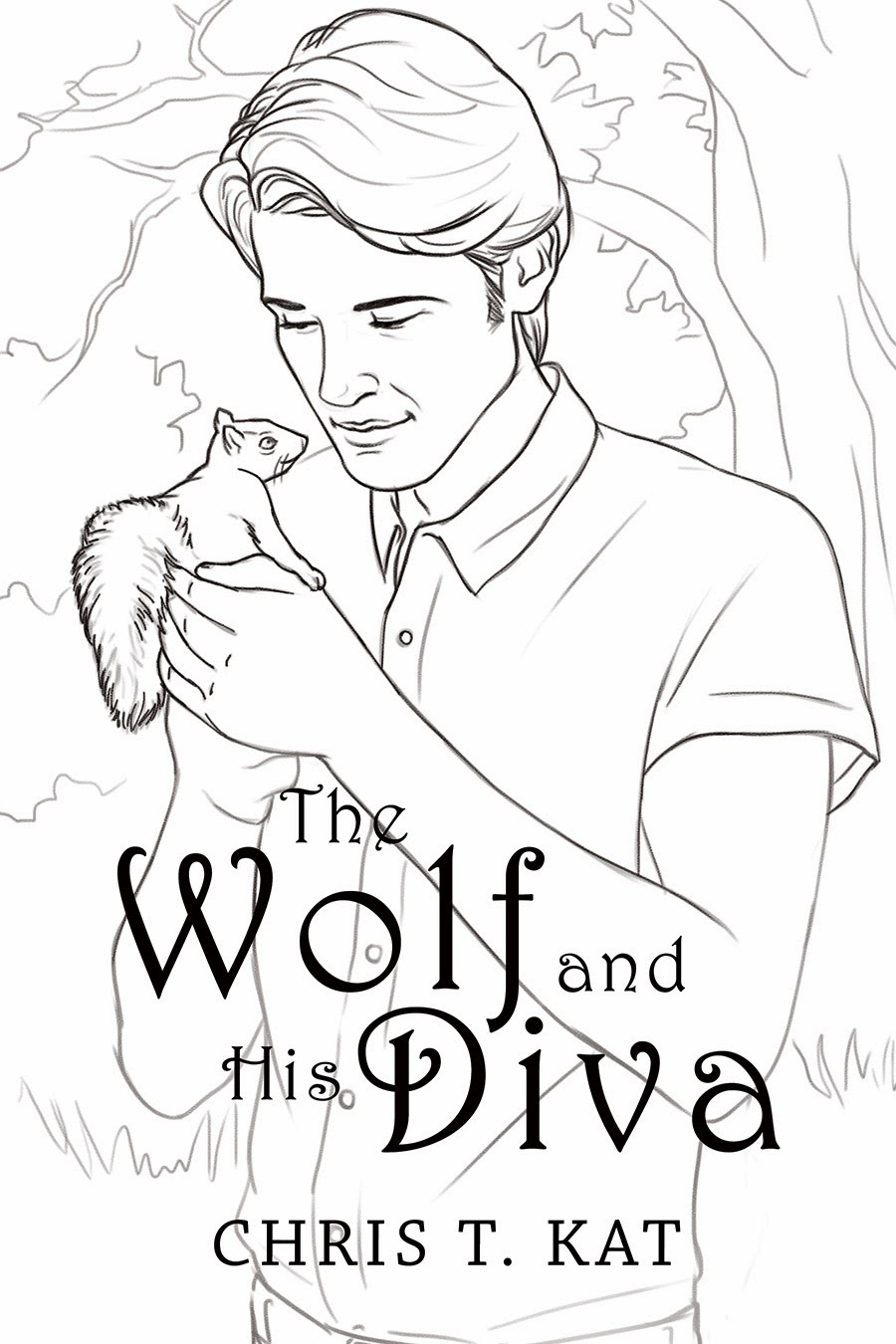 My kids (especially my daughter) loved the sketch so much that she asked me if she could color it in. Of course I said yes—after much internal squeeing. This is the result: 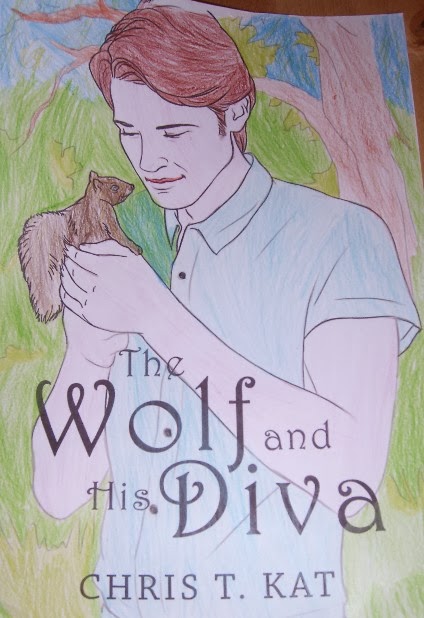 How about you? What kind of covers draw you in? Photos or illustrations? The hot and smexy? Inquiring minds want to know! :)
Oh, and below is the finalized version of the cover. 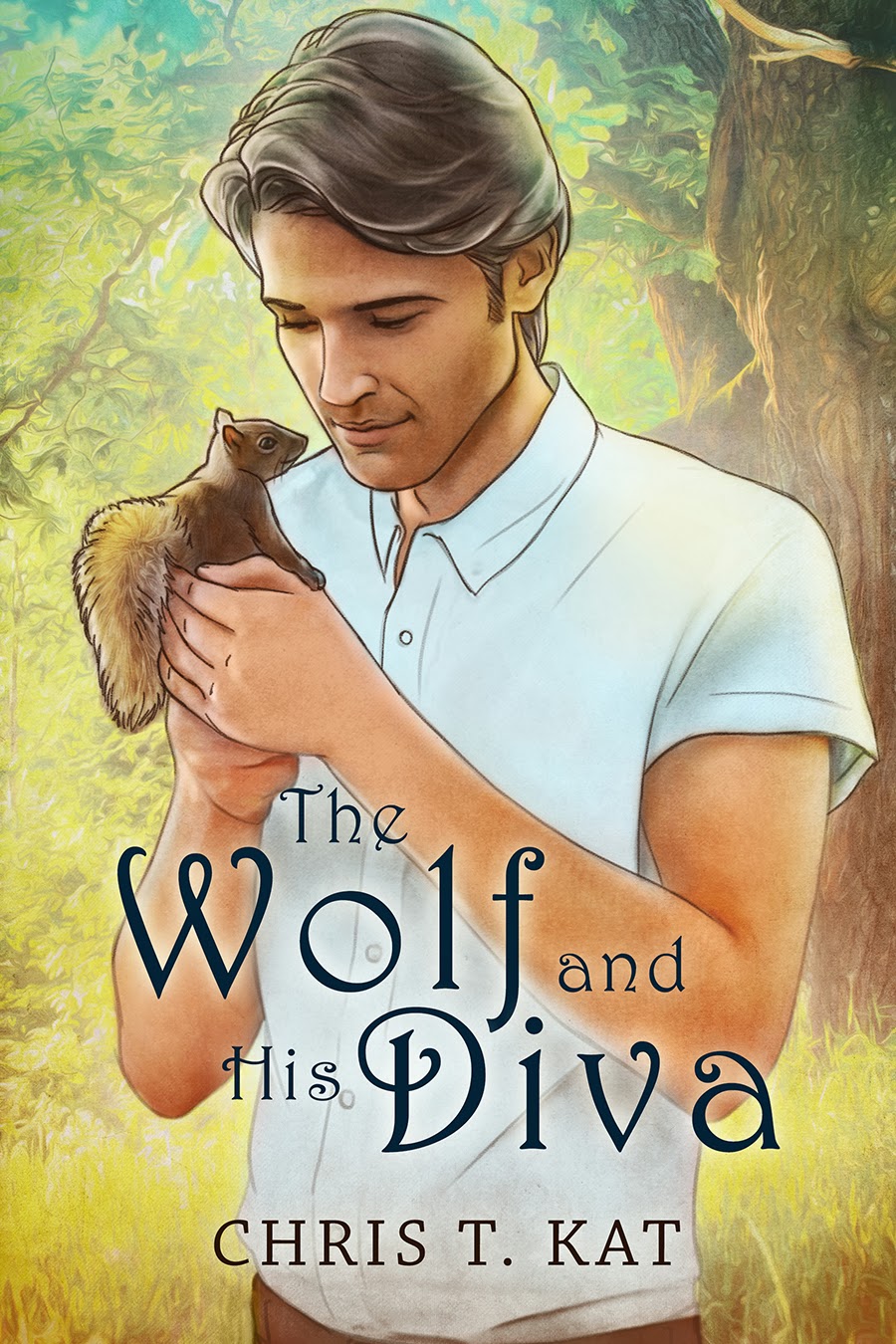 Blurb:
George Owens is comfortable with his life just the way it is. A wolf- and fox-shifter, George leads a reclusive lifestyle with his energetic and diva-ish mate Billy, a fox-and squirrel-shifter.
George has no desire to take over leadership of the pack, despite his father’s wishes. Edward Owens is feeling his age and wants to make sure the pack is in good hands should he not be able to win his next challenge. However, George is adamant that he wants no part of it.
But events rock George from his complacency, and he realizes he has to take a stand and fight for what he cares about. If he remains in the past and cannot change in order to do what he must, he risks losing everything he loves.

Excerpt:
After pushing his snout through the snow-covered entrance of the den, George sniffed. He sucked in deep gulps of crisp air, enjoying the slight burn deep in his lungs. He had no desire to be anywhere but there, in Alaska.
Contentment engulfed every pore of his being, and for the past few days, he’d not wasted one thought on his father, Edward, or his pack. Or the fact that Edward and his pack wanted him to take over the pack and become its leader.
Sometimes, George wished his pack would work like most others—the strongest wolf takes the pack. Just his luck that the Owens pack set great value on passing the leadership from father to heir, preferably to a male heir. Of course, that didn’t mean another wolf couldn’t become their leader, but that wasn’t the way their pack liked things to be done.
George shook his head, sneezed, and then climbed out of the den in his fox-form, scanning the area for any sign of danger. He couldn’t detect anything remotely dangerous and circled around to the entrance, leaving footprints in the snow. Small heaps of snow crumpled inside, and right on cue, he heard a plaintive hiss.
Watch what you’re doing! Billy called, using their telepathic connection.
George walked back, stuck his head through the hole that marked the entrance to their den, and looked for his mate. Billy was busy pawing at his left flank, trying to get rid of some stray snowflakes that had dared to fall upon him. George took a moment to drink in the sight of his graceful mate. Billy’s brilliant red fur stood out against the dark background of their den, and his pristine, white belly gleamed.
George’s own coat had a more brownish hue to it, and even though he had the characteristic black socks and ear-tips, neither his belly nor the tip of his tail was white-furred. Instead, these parts were covered in a light-gray fur.
In George’s eyes, Billy was the most beautiful fox-shifter he’d ever met.
Billy huffed when it became clear he couldn’t reach the snow. Instead, he shook himself vigorously, eliciting a yip from George. Billy gazed up at him with his head cocked to one side.
Oh, dear. You’re wearing your gooey look. When did you get to be so overly sentimental anyway? You weren’t like that when we first met.
George skidded back into the den and rubbed his head against Billy’s. A lot has changed since we first met, don’t you think?
Yeah, there’s that.
Are you complaining? George asked.
Billy’s tail stood up high in the air; only the white tip swished from one side to the other, always a sign of excitement.
Well, I don’t know about you, but I wouldn’t mind spending some time somewhere else. Like… let’s say inside, perhaps.
You are inside, George replied.
He pushed himself up on his hind paws and used his momentum to shove Billy on the ground, underneath him. Even for a fox, Billy was small, something Billy didn’t like George to comment on.
Billy pressed both hind paws against George’s belly while he angled with his forepaws for George’s neck. George nudged his face aside before gently licking from Billy’s snout to his chest, grooming him.
See? That’s what I mean! I know you’re all for the big wilderness and all that but… can’t we go home and have sex on a bed? You remember what’s it’s like, right? A real bed, I mean?
Images flashed up in front of George’s inner eye, images of Billy in his human-form—a small, lithe man with finely toned muscles everywhere and the most beautiful green-blue eyes. Oh, and he also had the thickest, albeit softest, auburn hair George had ever felt.
Hello-ho! You’re doing it again! Billy singsonged.
George nipped sharply at Billy’s left ear. I’m old. I’m allowed to be sentimental.
Billy snorted. You’re forty-three. That’s not old.
You’re twenty-eight. I’m from the Stone Age in comparison to you. I even have the gray hair to prove it.
Dork, Billy said with a great deal of affection in his voice. Come on, George, please. I want to eat a warm meal. I want to sleep in a comfortable bed with you curled around me. I want you to make love to me in our bed, not on a hard and frozen ground.
We padded our den. You’re not lying on frozen ground, George retorted, then made the mistake of gazing into Billy’s eyes. He sighed and surrendered. All right, we’ll go home.
Oh, splendid! Billy crooned. After flipping onto his side, he bounced to his feet. He was already climbing out of their den when he called, Last one home has to cook!
Hey! George shouted.
He received no answer. After crawling out of the den himself, he searched for Billy’s paw prints in the snow and gave chase.