Where stories meet: Shira Anthony Talks About Coming of Age and Adult Romance

Shira Anthony is my guest today. Not only is she a knock-your-socks-off writer (I love, love, love her Blue Notes series), but she’s a lovely person who says nice things about me. :D  And that’s all the intro she needs. 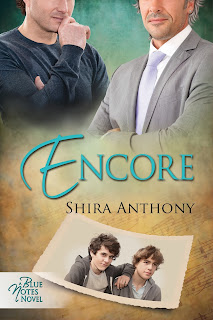 Thank you, Tali, for hosting me on your blog!  You are truly a joy: an amazing writer, a wonderful woman, and someone I’m happy to count among my friends. And even though I look forward to seeing more of you in person, thank you for inviting me for this virtual visit and for letting me explore some of my inspiration behind my new release, Encore.  And for those of you reading this post, be sure to check out the Blue Notes Holiday 2013 Blog Tour Giveaway link below.  You could win a Kindle loaded with lots of wonderful books, as well as a bunch of other great prizes.

For those of you not familiar with my Blue Notes Series of music/musician-centered gay romance novels from Dreamspinner Press, each is a standalone story, and can be read in any order.  The exception?  Symphony in Blue, which will be released on Christmas Day, 2013, and is a holiday novella and sequel to the first four books in the series. Encore, the 5th book in the series, is also chronologically the first.  So if you haven’t read any of the other books, this might be a place for you to start! Encore shares themes in common with the other Blue Notes books: music and musicians, a heavy focus on character development, and long-term, committed relationships.

Encore, unlike the other books in the series, tells the story of a relationship over a more than 30 year period, from when Roger Nelson and John Fuchs meet in high school, until the present day. One of my friends called Roger and John “modern star-crossed lovers.” They are.  Do they get their happy ending?  You bet, since I won’t write a romance without one.  But it’s a very long haul.  One of the benefits of writing a relationship over such a long period of time was that, in a sense, I got to write 2 different books: a coming of age story, and a mature, adult romance.

When Roger and John meet, Roger is a violinist with a very promising future and John is an aspiring conductor.  In this first half of the book, the two boys are at very different places in their lives.  It’s the early 1970s, and being gay in the US was so much more difficult than it is now. John has already figured it out.  He’s not “out” or “proud” in any sense of the word, but he knows who he is and he’s accepted it.  Roger, on the other hand, has not.  And it’s his struggle that is probably the most difficult to write and to read.  I know I personally wanted to take him by the shoulders and shake him—make him realize he was meant to be with John and stop pretending he was someone else.  But the reality of the 1970s was that there were many men like Roger who had a vague sense that something was wrong with their lives, but didn’t want to face the truth: that they were homosexual. Being gay meant a lifetime of ridicule, hatred, or worse.

The adult romance comes when, after Roger and John had been separated for a long time (they’ve stayed best friends throughout their lives), Roger finally comes to accept himself for who he is.  By then, John is a superstar conductor and a bit of a playboy.  There’s only one man he wants to be with, and that’s Roger, but he’s afraid Roger will break his heart again.  So the mature, adult romance part of Encore is all about self-acceptance and trust.  A very different sort of relationship.

The youthful and adult relationships, however, share much in common.  When Roger and John get back together after being apart for many years, they have to re-explore some of the same things they explored before: emotions and sexuality.  They’ve been friends, but they need to become lovers again.  I hadn’t planned on creating that parallel.  As often happens, my characters “told” me to write it that way.  It felt right, and it felt honest to have that rediscovery after so long.

The lesson I learned here (and one I hope will help inspire my own interest in writing young adult romances at some point down the road)?  Relationships are driven by human beings.  By their flaws, their quirks, their hearts and minds.  Sure, youth plays a role in how a relationship grows, but not as much as you might think.  Long-term relationships, like Roger and John’s, are about coming to understand and learning to live with another person’s soul. 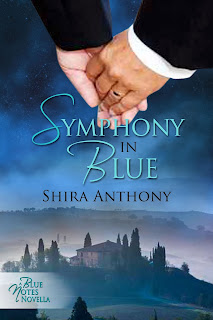 Looking for sexy hot romances with fluffy scenes?  I think you’ll like the Blue Notes books.  But if you’re also looking for something more—for something more real than Cinderella and her prince? I think you’ll enjoy these stories about real men in real relationships.  You can find all of my Dreamspinner Press books by clicking here.  Want to read more about me and about my books, including free fiction and excerpts?  Check out my website, www.shiraanthony.com.

Don’t forget to enter the Blue Notes Holiday 2013 Blog Tour giveaway by clicking here (Rafflecopter).  There are plenty of ways to enter, and you can enter more than once by commenting, tweeting, buying books, and liking pages.  I’ll be drawing winners on New Year’s Eve at midnight!  Good luck! –Shira

[Tali here…] How about a lovely EXCERPT from Encore?