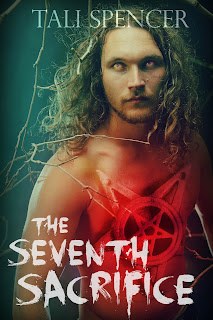 Beltran is a peaceful man, but when his Bolivian cousin is brutalized, he seeks out a native sorcerer in a quest for vengeance. He doesn't know the attractive shaman, Katari, is an amaru demon, a serpent shifter determined to break an ancient spell. Beltran’s about to discover the price of black magic.

This story was originally included in the Devil’s Night anthology and is now being offered for individual purchase.

One of the cool things about this story—at least for me—is that it has locations I know from from my time in Bolivia. The roof and interior of the Iglesia de San Francisco, for example, and the city of La Paz. I walked the same streets Beltran does and shopped at the Mercado de las Brujas. And the things my mother-in-law told me about that church and the market behind it made their way into this story. I just take the story in a very dark and non-consensual direction, so fair warning.

Here's a snippet from the beginning:

Marisol had told him the shop to look for, that it would have an orange awning with a sign proclaiming it to be the house of guardian angels.  Two angels hugged the words, though the beings looked more like winged serpents.  In fact, they looked a bit like demons.
Beltran thought them fitting.  Angels had little enough to do with the native religion.
He angled his way through the street’s milling crowd of colorful cholas and photo-snapping tourists until he reached the shop entrance.  Two stone steps flanked by tables of packaged, prefabricated charms led to the narrow hole-in-the-wall that constituted a store.  Every spare millimeter of space was packed with arcane objects.  Fully furred llama fetuses with huge, black eyes and grimacing teeth hung from a pole over the doorway, while more of the same—mummified and without fur—lay piled in baskets.  The dried husks of armadillos, toads, and starfish held sway among racks of cheap beads, brass bells, and trays of colored powders.  Beltran hoped the powders were herbs, but at least one looked like dried blood, and he knew the others could be anything from antlers to hooves, teeth, or bones.
But what caught his eye next, and took away his already scanty breath, was the man sitting on a stool just inside the doorway.  Black hair, straight and shining, framed a brown face with strong features and high cheekbones.  The heavy mane cascaded behind broad shoulders and a red poncho of alpaca wool.  As the man rose to his feet, Beltran saw that he was taller than most native men, with a wiry, powerful frame.  The shopkeeper’s eyes commanded him most of all: deep and black, they locked onto his with a hunger so fierce, the compulsion in them made him quiver.


Holy Mother of God, Beltran thought, forcing himself to breathe normally.  Marisol never told me her shaman would be gorgeous!

The ebook is available at Storm Moon Press.
Also at All Romance Ebooks.