Welcome to the Backlist Blog Hop! 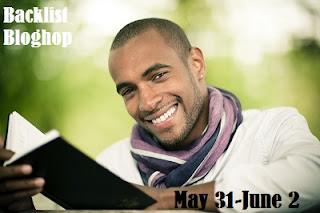 In the publishing world, anything out for more than three months is old as dirt. Still, dust one of them off and you may find a new favorite story or author. If you like reading high fantasy adventure and romance, you might like one of my backlist books. For example, my dog likes this one... 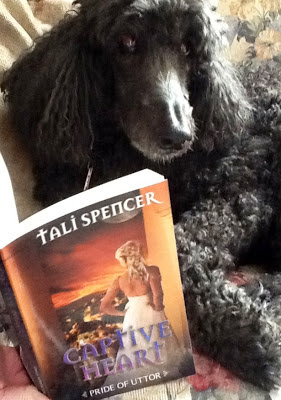 For a chance to win a free book or the $10 gift card, just answer this question: science fiction, or fantasy? I’m trying to figure out what to write next and could use the help. Simply leave a comment with your answer and your email (so I can contact you should you win) on this post or any of my backlist posts through Sunday.

What Are the Prizes?

For each 10 comments I will pick one commenter to win their choice of any one book in my backlist in any format. This includes paperbacks.

I will also pick one winner for a $10 gift card from their choice of Amazon, Dreamspinner, or ARe.

I’m a fairly new (and slow) writer, so all my books are shown on the sidebar or you can browse the Books By Tali Spencer page. But just for fun here’s a quick rundown of my titles:

Sorcerer’s Knot – to quote a reviewer “it’s all fun and games until someone gets tentacle-raped.”

The Prince of Winds – the book that was stolen and published illegally by an evil thief. True.

Dangerous Beauty – there’s nothing Endre won’t do for his family... even if it leads to trouble.

Captive Heart – who says being captured by a big-nosed emperor can’t be fun? [ebook and paperback]

Look for excerpts from these books tomorrow and Sunday! Requests will be considered. For today, here’s one of my personal faves from The Prince of Winds.
Rimmon woke first, pulled away from sleep by images of black-sailed ships walking upon water, their thousand legs moving in rippling unison. His eyes opened to deep silver shadows, then drifted to the window through which pink clouds striped a pewter sky. Melkor’s arm draped over his, a warm, possessive restraint of bone and muscle. Lulled, he slipped back toward slumber, wrapped in the masculine scent of semen and musk. The Hordish prince’s beard grazed his shoulder and an insistent erection pushed against his buttocks, arousing him enough that he groped back toward wakefulness. He remembered then. He and Melkor had coupled urgently, even savagely, and then, after bathing, had eaten and made love. They’d touched and nuzzled and indulged their mouths with each other’s cocks, then coupled once more before they’d curled their bodies together for sleep.

Black ships, striding the water. Where had that image come from? He had only heard of ships before, never seen one except in drawings, and now he saw many. It did not feel like a dream. He listened, hearing the slap of waves against rocks far below. Ayet’s call drew his eyes again to the window, and he saw her, wings and spread tail glowing red with the first light of dawn as she downstroked to land on the window ledge. She had left her perch, as she often did at the sunrise, to hunt.
Stirring, Melkor moved over him, smiling down with a predator’s smirk.

With a swiftness that surprised him, Melkor bounded from the bed. He raced to the window, where he stared for a moment into the distance.

“I don’t know. Ayet saw them, I think. Black ships, with black legs, walking the water.”

A tight snarl broke across Melkor’s face. Striding to the terrace, bending down to grasp one of the smaller carpets along the way, he snapped it out, sending it flying. The rug landed floating at knee-height above the stone floor and the prince seated himself upon it. Within moments, before Rimmon realized what he was doing or could run to join him, Melkor was over the wall and high above the sea. Ayet, sensing the excitement, squawked, and Rimmon issued an order: Follow!

Check out all the other blogs in the Backlist Blog Hop for more opportunities to discover and win books by authors you love... or may soon grow to love!